10 Facts That Prove Big Sis Is Wrong, Drudge Is Right 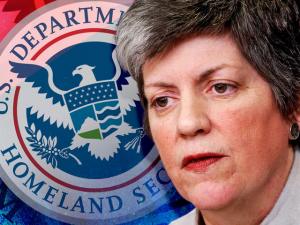 Janet Napolitano’s contention that Matt Drudge is “just wrong” about privacy worries surrounding airport screening technology is completely at odds with the facts, which illustrate how the DHS has been caught time and time again lying about both privacy and health issues in a transparent ploy to undermine genuine concerns.

“I think that what he means is we are watching too much—kind of an Orwellian view. He’s just wrong. I mean, he’s just wrong,” Napolitano told Politico, labeling privacy concerns “overblown”.

A quick fact check however shows that it’s Napolitano who is “just wrong”. The DHS has repeatedly lied about the privacy and health threats posed by naked body scanners in an effort to keep the controversy under wraps, as well as withholding evidence.

– Privacy concerns were completely justified after a recent release under the Freedom of Information Act of DHS plans for the mass rollout of mobile body scanners, documents which were largely redacted, with entire pages having been blacked out by the agency.

– Before the agency was forced to roll out new “stick man” software upgrades, to deflect genuine privacy concerns, the DHS simply lied about the fact that the scanners produced naked images of the body which showed genitalia in crisp detail.

– When the agency was finally forced to admit that the scanners do produce naked images, they then claimed that it was not a privacy concern because such images could not be printed or saved in any way. This claim was exposed as yet another act of mass public deception when documents emerged confirming that the U.S. Marshals Service had surreptitiously saved thousands of naked images from a scanner at the security checkpoint of a single Florida courthouse. The Electronic Privacy Information Center also obtained documents from the DHS showing that the machines used by the department’s TSA screeners are not only able to record and store naked body images, but that they are mandated to do so.

– In claiming that the body scanners were safe, DHS cited a study by Johns Hopkins University. This was a complete lie. In reality, Dr Michael Love, who runs an X-ray lab at the department of biophysics and biophysical chemistry at the Johns Hopkins school of medicine, concluded that “statistically someone is going to get skin cancer from these X-rays”.

– In brushing aside radiation concerns, Big Sis also completely ignored the warnings of numerous highly respected scientific bodies and academic authorities that the scanners posed serious health risks, including the Massachusetts Institute of Technology, the Inter-Agency Committee on Radiation Safety, and the University of California. When a “cluster” of cancer cases developed amongst TSA screeners at Boston Logan, the TSA attempted to cover up the story.

– Big Sis was also caught lying about the level of radiation emitted by the scanners. Scientists at Columbia University found that the dose emitted by the naked x-ray devices could be up to 20 times higher than originally estimated, likely contributing to an increase in a common type of skin cancer called basal cell carcinoma which affects the head and neck.

– For those who refuse to go through the scanners on privacy or health grounds, the notorious TSA pat down has also been repeatedly mischaracterized and lied about by the TSA in a bid to downplay a privacy furore. Napolitano herself claimed that the pat-downs were discreet, yet hundreds upon hundreds of accounts and reports of travelers being harassed constantly prove otherwise. At one stage the TSA even tried to claim that no squeezing or groping whatsoever was taking place, even as reports of people literally having their genitals grabbed poured in.

– The TSA was also caught lying about subjecting children to pat downs in yet another transparent ploy to undermine genuine privacy concerns. In April, the TSA defended the groping of a 6 year-old girl, saying it followed policy. Yet in November 2010, the agency had vowed to conduct no ‘enhanced’ pat-downs for children under 12.

– Napolitano’s attempt to dismiss the “Orwellian” nature of how the DHS operates in the context of airport security is noticeably absent the fact that journalists who have been critical of Homeland Security have found their names being placed on a terror watchlist, people like CNN reporter Drew Griffin.

– Indeed, anyone who opposes minimum wage criminally-inclined morons who would struggle to hold down a job flipping burgers fondling their kids has officially been labeled a “domestic extremist” by the TSA in its own memo. It doesn’t get much more “Orwellian” than that.