Support for BLM is a losing election issue.

A new Associated Press poll finds that there has been a massive 15 point swing and that most Americans are now hostile to Black Lives Matter protests.

“The poll from The Associated Press-NORC Center for Public Affairs Research finds that 44% of Americans disapprove of protests in response to police violence against Black Americans, while 39% approve. In June, 54% approved. The new survey was conducted Sept. 11-14, before Wednesday’s announcement that a lone Louisville police officer would be charged in the Taylor case, but not for her actual death.”

The figures are also interesting when broken down along racial lines.

Just 35% of white Americans approve of the protests, down from 53% back in June. Just Latinos, 31% approve, compared with 44% in June.

Support for BLM amongst African-Americans has also dropped from 81% to 63%.

As Chris Menahan notes, “AP-NORC chose to exclude Latinos from their chart to make it seem like this is just a Black vs White thing.” 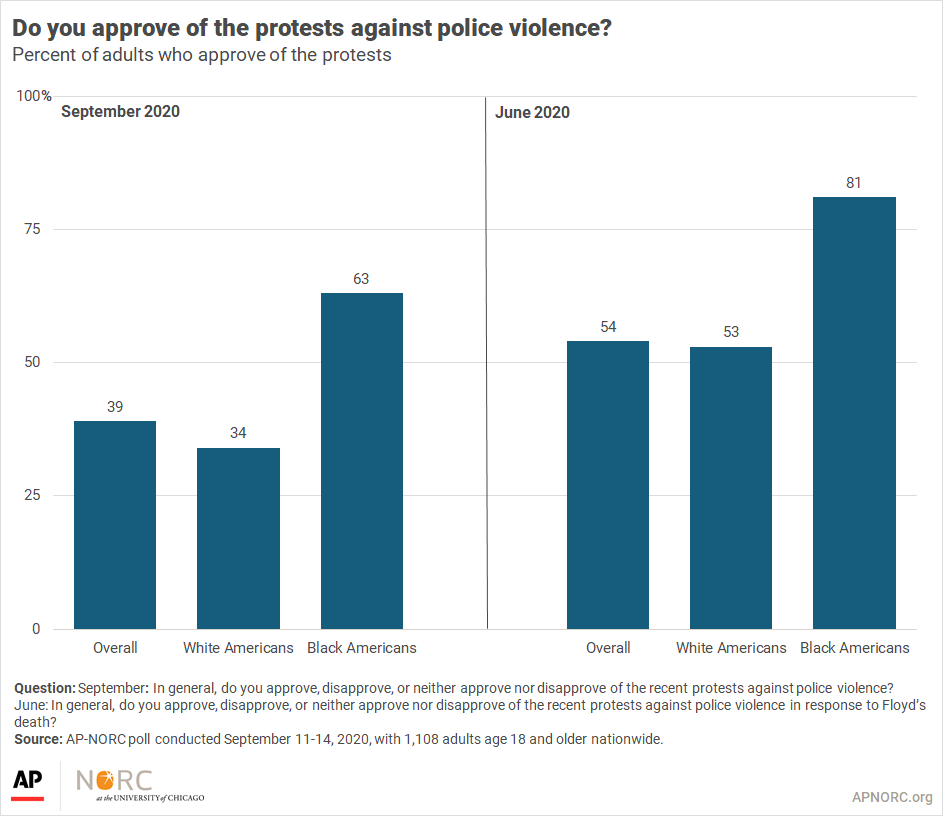 Support for BLM amongst Republicans has also dropped from 29% to 9%. Meanwhile, 70% of Democrats still approve of the protests, while significantly more people on both sides of the political spectrum believe the demonstrations to be “mostly or all violent.”

The survey also finds that belief in the central underpinning narrative pushed by BLM, that blacks are being indiscriminately targeted by police, is being eroded.

“Overall, Americans are less likely than they were in June to say deadly force is more commonly used against a Black person than a white person, 50% vs. 61%. And fewer now say that officers who cause injury or death on the job are treated too leniently by the justice system, 52% vs. 65%.”

The numbers are clear – supporting Black Lives Matter is a losing election issue.

Only when Democrats began to realize that a few weeks ago did they finally denounce the bedlam that has plagued American streets since the end of May.