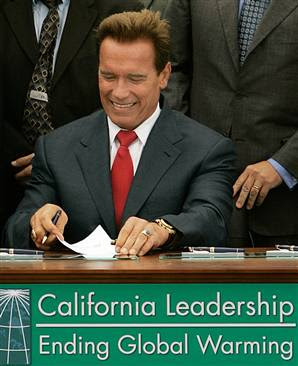 As the federal “Cap and Trade’ bill falters in Congress [2], and resistance to the EPA’s 18,000 [3] page new regulation document grows, globalists are trying to bring about expanded control, using the discredited excuse of man made global warming, on a State and local level.

Californians, finally realizing the magnitude of the cost of a statewide ‘Cap and Trade’ [4] scheme, in addition to a massive increase in government control, lined up to sign a petition to freeze any action on AB 32 (Cap & Trade scheme voted into law in 2006, to be implemented in 2012). Only 435,000 signatures were needed to get the initiative to suspend AB 32 on the ballot in November, but they got over 800,000 signatures. Thanks to ‘Climategate’ and the numerous other UN science frauds [5] that have been exposed, people are beginning to understand the overall agenda: Agenda 21 Sustainable Development (which uses environmental issues to depopulate and control the masses).

This matters to everyone across the country because the Agenda 21 battle is from global to local. It will not stop here, but will continue to be pushed in local governments, in the private sector, schools and local UN programs like ICLEI [6].   Mayors are a major target in local governments.  When people become aware of the deceit, it loses its power. Therefore, it is important to understand the game plan behind the Cap & Trade scheme, by looking at the implications of the AB 32 ‘Scoping Plan’: [7]

The scoping plan uses scare tactics based on false science; for instance, it warns that California will lose 90% of its snowpack in the Sierras by the end of the century, due to man made global warming (pg 9).

AB 32, the Cap & Trade scheme, relies on local governments (“essential partners”), as they have broad influence and the authority to plan, zone, approve, and permit where land is developed. This will impact the following sectors: transportation, housing, industry, forestry, water, agriculture, electricity and natural gas, with rules based on man made global warming lies. One of AB 32’s top priorities is transportation [8]– with 3 types of regulations: vehicle emissions, carbon content in fuel and, most importantly, reduction in the number of miles that vehicles travel- in other words, collectivists want us out of our cars and walking, biking or using public transport, to increase their control (pg 71).

The AB 32 Scoping Plan further promotes land use planning and infrastructure projects designed to limit travel, otherwise known as “smart growth” [10] (pg 71). The scoping plan also includes an environmental rating system for homes and commercial buildings to “encourage” costly retrofits for buildings that do not meet their minimum standards of performance. AB 32 intends to “tap into” local government authority for code compliance (pg 42). Imagine the potential burden for businesses, as California’s industry has already been crushed.

The AB 32 scoping plan also dips its tentacles into water, as it suggests that a “public goods” charge could be collected on water bills, perhaps generating $100 million to $500 million in revenue, ostensibly to fund water improvements. The scoping plan justifies this by proclaiming that there would be the benefit of water supply reliability for customers (pg 66), but at what cost?

In order to accomplish the end goal of this blueprint for control, there are numerous avenues that the collectivists will pursue:

Finally, the only way to implement this nonsense, is by way of enforcement through the government, so the Air Resources Board (ARB) advocates partnering with local, State and federal agencies to carry out inspections and prosecute violators (pg 109). “To ensure compliance, ARB would administer penalties for entities that hold an insufficient quantity of allowances to cover their emissions or fail to report their greenhouse gas emissions. Missed compliance deadlines would also result in the application of stringent administrative, civil, or criminal penalties.”

Sustainable Development, another name for Agenda 21, is already in your community; awareness and action are needed to remove it.  Remember, the only thing that apathy and action have in common is you.  Find out more information about Agenda 21 and solutions for it at www.MorphCity.com. [12]

Thanks to Michael Shaw of www.FreedomAdvocates.org [13].