Media, police and politicians disparage communities protecting themselves as “vigilantism” 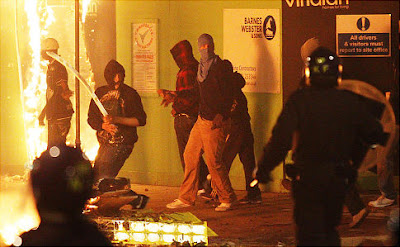 Following calls by politicians, media and the police for Brits not to buy baseball bats and engage in what was disparagingly termed “vigilantism,” Amazon UK has followed suit by banning self-defense items from its online store, after sales of makeshift weapons soared through the roof as a result of riots plaguing the country.

In the immediate aftermath of widespread looting and rioting which was directed primarily against private homes and local family businesses, Brits left defenseless by a blanket gun ban that makes it virtually impossible to own a private firearm rushed to Amazon to purchase whatever could be used as a weapon to protect their families and property from attack.

The need for self-defense was exacerbated after police in London were ordered to stand down and let the rioting take place for the first three nights of chaos as a result of a Scotland Yard directive.

Sales of aluminum truncheons and baseball bats skyrocketed, with some items achieving sales 50,000 per cent above normal.

However, despite the fact that communities organizing themselves into groups to protect their streets, undermined by being labeled “vigilantes” by the media, did indeed serve to quell the worst of the rioting, politicians like Stella Creasy, MP for Walthamstow which was hit by riots on Monday night, lambasted members of the public for purchasing weapons to defend themselves.

“This crosses the line when it involves weapons,” said Creasy. “That just encourages the sense of fear – we want to reduce tension and fear in the area. People with baseball bats roaming the streets is not helpful: don’t go on Amazon buying them.”

“Amazon has removed several police-style telescopic truncheons from sale on its site as soaring sales of truncheons, baseball bats and other items that could be used as weapons sparked fears of vigilantism in the wake of widespread rioting,” reports the Guardian.

Amazon users were divided about the decision, but many applauded the move despite the fact that police completely failed to protect countless businesses from being burned to the ground and did little to stop violence which led to people being killed.

“Even if they are being bought by respectable home and business owners, they should be banned from sale temporarily,” said V Woolf. “Vigilantism is not the answer. Get these items off the shelves, we are all scared and angry in London and need to know that measures are being taken to help us to feel safe in our cities again.”

But there’s a difference between ‘feeling safe’ and actually being safe in your own home. No amount of government legislation or police deterrence can provide true safety and security, that responsibility rests with the individual. This has been proven in triplicate over the past few nights. As soon as communities started banding together and patrolling their streets, the riots withered and last night there was virtually no trouble at all.

However, the media quickly disparaged people getting together with their neighbors to protect their communities as “vigilantism”. The Metropolitan Police, whose order to its officers to stand down on the first three nights of rioting directly led to the escalation of the chaos, also warned residents not to patrol their communities.

Just like gun control, banning baseball bats only disarms the public and creates victims. Criminals will always be able to acquire weapons of any description because they do not obey laws. Leaving Brits defenseless will only embolden the rioting hordes.

If the UK riots have proven nothing else, they’ve proven that the authorities cannot and will not protect you. It always comes down to the responsibility of the individual and the community to protect their own families, businesses and private property.