Winston Smith’s Oceania has nothing on 2011 America

Americans are now living in a society that in some cases is more draconian, more invasive and more Orwellian than the dystopian tyranny fictionalized in Orwell’s chilling classic Nineteen Eighty-Four. On almost every front, American citizens are under an equal or greater threat of abuse, control and more pervasive and high-tech surveillance than anything Winston Smith ever faced. 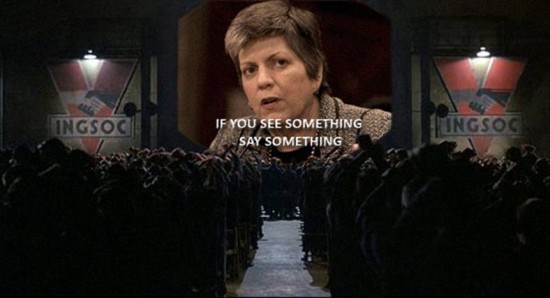 Compare life in Oceania to life in 2011 America, with quotes from George Orwell’s 1984 appearing in italic.

“In general you could not assume that you were much safer in the country than in London. There were no telescreens, of course, but there was always the danger of concealed microphones by which your voice might be picked up and recognized.”

Americans will now too have their every utterance listened to by Big Brother in public through surveillance-capable street lights now being installed in major cities across the country which can record private conversations. Just as the citizens of Oceania could never be sure of their privacy, Charlotte’s Deputy Homeland Security chief told the local Fox network earlier this week that Americans “would never know” whether or not the government was listening.

“In the far distance a helicopter skimmed down between the roofs, hovered for an instant like a bluebottle, and darted away again with a curving flight. It was the police patrol, snooping into people’s windows.”

America in 2011 is more advanced than Orwell’s Oceania in that it doesn’t have to rely on expensive helicopters to spy on citizens. That job has now been entrusted to unmanned drones that not only act as surveillance devices, they can also carry tasers that deliver incapaciating electric shocks to “suspected” criminals.

“It was terribly dangerous to let your thoughts wander when you were in any public place or within range of a telescreen. The smallest thing could give you away. A nervous tic, an unconscious look of anxiety, a habit of muttering to yourself – anything that carried with it the suggestion of abnormality, of having something to hide. In any case, to wear an improper expression on your face (to look incredulous when a victory was announced, for example) was itself a punishable offense. There was even a word for it in Newspeak: facecrime, it was called.”

Facecrime is now a reality in 2011 with the aid of behaviometrics – a new omnipresent surveillance technology developed for the US Air Force and destined to be used in law enforcement to “monitor suspicious behavior”. The system revolves around a camera that tracks facial movements biometrically in order to build a psychological profile of the individual under surveillance. The movements of the muscles in your face will alert Big Brother, through the process of “behavior analysis,” to your presence as a suspicious individual who may be engaging in the act of thought crime, or God forbid, planning a public protest.

“It was almost normal for people over thirty to be frightened of their own children. And with good reason, for hardly a week passed in which The Times did not carry a paragraph describing how some eavesdropping little sneak — ‘child hero’ was the phrase generally used — had overheard some compromising remark and denounced its parents to the Thought Police.”

As part of Homeland Security’s See Something, Say Something program, Americans are being bombarded at every level, from Wal-Mart, to football games, to hotel rooms, with messages encouraging them t to report their fellow citizens for engaging in “suspicious activity,” which as we have documented, includes mundane behavior such as paying with cash, opposing surveillance, using a video camera, talking to police officers, wearing hoodies, driving vans, writing on a piece of paper, and using a cell phone recording application.

Schools are also now training children to be “eco-spies” by reporting on their parents’ bad recycling habits, encouraging kids to “re-educate” them into compliance.

“Inside the flat a fruity voice was reading out a list of figures which had something to do with the production of pig-iron. The voice came from an oblong metal plaque like a dulled mirror which formed part of the surface of the right-hand wall. Winston turned a switch and the voice sank somewhat, though the words were still distinguishable. The instrument (the telescreen, it was called) could be dimmed, but there was no way of shutting it off completely.”

Just as the citizens of Oceania were constantly bombarded with propaganda from the state via telescreens, Americans are now being subjected to the same onslaught in the form of spurious “alerts” from the federal government that are delivered through numerous platforms, including LED screens on the ‘Intellistreets’ lighting network, televisions at Wal-Mart stores that play Janet Napolitano’s “See Something, Say Something” diatribe, FEMA’s Emergency Alert System that can hijack all conventional boradcast communications, and mandatory government messages that will appear on all new cellphones from the end of next year. And if that isn’t enough, the Washington Post today called for the Internet to also be brought under the auspices of a government takeover switch. Whereas Winston Smith only had to put up with Big Brother lecturing him via telescreens, Americans will be peppered with propaganda from every conceivable direction.

“In the vast majority of cases there was no trial, no report of the arrest. People simply disappeared, always during the night. Your name was removed from the registers, every record of everything you had ever done was wiped out, your one-time existence was denied and then forgotten. You were abolished, annihilated: vaporized was the usual word.”

American citizens are not merely “disappearing” without a trial, as happened those who had comitted thoughtcrime in 1984, they are being directly assassinated via Predator drone strikes with no oversight and no legal process whatsoever. As the case of U.S. citizen Anwar Al-Awlaki shows, Americans are now at risk of falling victim to a program of state-sponsored assassination should they be designated “terrorists”. In Orwell’s 1984, miscreants were tortured and brainwashed, but they were not murdered on a whim by government decree before at least being given the opportunity to recant.

“Don’t you see that the whole aim of Newspeak is to narrow the range of thought? In the end we shall make thoughtcrime literally impossible, because there will be no words in which to express it. Every concept that can ever be needed, will be expressed by exactly one word, with its meaning rigidly defined and all its subsidiary meanings rubbed out and forgotten.”

Illiteracy rates in many large states are rising. One in seven Americans cannot read anything more challenging than a children’s picture book. Americans are being dumbed-down by an onslaught of fluoride in the water, cultural decay that celebrates stupidity over intelligence, and a public school system in terminal decline. Attention spans are shortening as Americans are fed a constant diet of mind-numbing “entertainment”. Vocabularies are shrinking as many Americans can barely express themselves. Whereas in 1984, higher-level thinking was destroyred directly by the state, in 2011 America the entertainment industry is doing just as good a job if not better.

“In Oceania at the present day, Science, in the old sense, has almost ceased to exist. In Newspeak there is no word for ‘Science’. The empirical method of thought, on which all the scientific achievements of the past were founded, is opposed to the most fundamental principles of Ingsoc. And even technological progress only happens when its products can in some way be used for the diminution of human liberty.”

Technology is being used to crush human liberty and eviscerate our privacy. Every technological advancement, from Facebook to the IPhone, brings with it a further assault on privacy. The U.S. judicial system is identifying ways to legalize constant surveillance over every American, most recently with the effort to give authorities the power to secretly track Americans through clandestine global positioning systems attached to their vehicles.

“Only a person thoroughly grounded in Ingsoc could appreciate the full force of the word bellyfeel, which implied a blind, enthusiastic, and casual acceptance difficult to imagine today.”

Orwell’s “bellyfeel” is our cognitive dissonance. This is the process of having blind faith in an explanation or a fact so long as it comes from the establishment – the actual truth of the matter bears no significance. Bellyfeel enables Americans to unquestionably accept everything they are told without the need for critical thinking. On the eve of the invasion of Iraq, 69% of Americans believed that Saddam Hussein was involved in the 9/11 attacks, despite there being no evidence whatsoever that it was true.

These are just a handful of examples that illustrate how Americans and westerners in general are now living in a society that rivals and in some cases outstrips the world of Winston Smith in 1984. Smith was eventually made to love Big Brother and accept that two plus two equals five if the authorities say it does.

The question is, will Americans ever reclaim their sense of dignity and freedom or – like the Party members in Orwell’s Oceania – will they learn to love their servitude?