An Antifa supporter is threatening to acid attack attendees of the Demand Free Speech rally on July 6 in Washington DC.

The individual posted the threats to social media messaging app Telegram, commenting “I just want to blind as many of you cock suckers are possible [sic],” adding, “We already have the Muriatic acid, wax, and balloons.”

“I just want to toss as many balloons of Muriatic acid in the faces as many Proud Boys I can,” he added.

The threats prompted event co-organizer Enrique Tarrio to contact the FBI and DHS, who will now apparently be on site to provide security at the event. 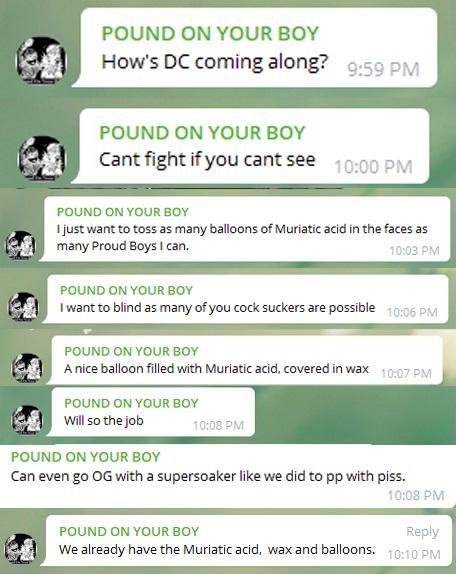 “It starts with milk shakes, then it escalates to what happened to Andy Ngo,” Tarrio told Big League Politics. “And now they’re threatening us with acid attacks, all because we want to defend free speech in Washington, D.C.”

Tarrio explained how the individual threat to combine wax with acid is particularly dangerous because the wax could enter the injured person’s blood stream and cause cardiac arrest.

“Muriatic acid can be purchased in virtually any pool store or home improvement store, and is already dangerous on its own with the ability to cause minor burns, but can quickly be washed off with water. By combining the muriatic acid with wax, it will immediately form a film similar to candle wax on the injured person’s skin,” he said.

Although the individual who made the threats posted artwork and used a pseudonym associated with pro-Antifa Rolling Stone and Playboy journalist Fagan Kuhnmuench, he denies all involvement.

At a rally on Saturday in Portland, numerous attendees were violently attacked by Antifa members, including two men who were clubbed round the head with metal objects and maced in the face.