Baltimore On Track For Record Homicides As City Descends Into Chaos

So here we go again, another depressing story from Baltimore City, a region that is imploding on itself and suffering from a murders crisis, opioid epidemic, a wide gap in wealth/health/education inequalities, and deindustrialization.

In this report, we’re only going to focus on the murder crisis and gently touch on the opioid epidemic (because they go hand in hand), however, please search our archives for other stories on Baltimore, because the implosion there is what will be coming to many other inner cities across the country in the 2020s.

With that being said, Baltimore City could be on track to surpass last year’s 309 homicides, and if current trends persist, there is a chance that homicides could hit a record high, which means the city could see 342, a level that was previously set in 2015 and 2017.

“Baltimore is on course to reach more than 300 homicides for the fifth year in a row, with 232 killings through Wednesday compared to 199 at the same time last year,” The Baltimore Sun said.

To combat the murder crisis, the federal government and Baltimore City Police unveiled a permanent “strike force” comprised of detectives, prosecutors, and federal agents will begin operations to target Baltimore drug gangs and their Mexican suppliers, who have been flooding the city with heroin and fentanyl.

No details were provided if the strike force will target hospitals and pharmaceutical companies who continue pumping legal opioids onto the streets. Legal opioids kicked off the opioid crisis across the city several decades ago, not Baltimore gangs and their Latin American suppliers.

As shown in the chart below, cumulative homicide trends are likely to record the 5th consecutive year of murders over 300. 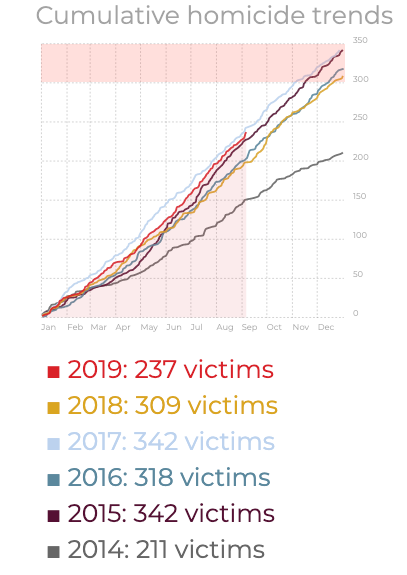 The next chart shows most of the homicides this year have been caused by a gun.

Geographically speaking, the killings aren’t situated in just one part of the town but are more widespread.

Last week, we reported how one neighborhood in the city transformed into a warzone. We said: “There was so much gunfire at one point that not even a single rat was spotted on the streets of East Baltimore City.”

We said this last week, and we’ll repeat it: “There’s no meaningful policy in place to turn Baltimore around in the next decade. So in the meantime, if you value your life, stay away from Baltimore.”