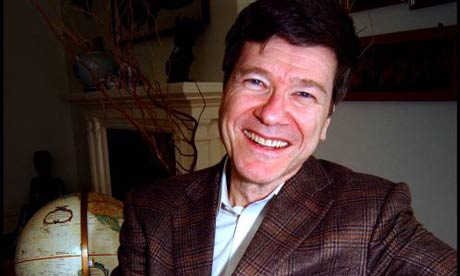 Randomly pick a globalist scholar, one that is celebrated by academia and government alike, and you’ll find a can of worms under the crust, to be sure.

While reading a panel discussion on “achieving the MDGs by 2015: Preparing for the 2010 UN MDG Summit”, I stumbled upon recent remarks made by professor of health policy and management and director of the Columbia University based Earth Institute, Mr. Jeffrey Sachs. He stressed urgent need for population reduction. The person in charge of transcribing the discussion, made the following note:

“(…) the fertility reduction and stabilization of population is crucial. He (Sachs) concluded by urging for the adoption of a globally agreed action plan at next year’s Summit to achieve the MDGs by 2015, and proposed to form Working Groups with members of the delegations around particular themes. He characterized this effort as not negotiation, but as global problem solving and suggested that the Working Groups would brainstorm on the globally agreed plan.”

Having A Supply Of Healthy Foods That Last Just Makes Sense

Now, Mr. Sachs, like many of his colleagues, can be considered  a prime example of a death-promoting globalist, and one who is not afraid to admit it. Sachs is something of a character, to be sure. Besides being named among the 100 most influential people in the world by Time Magazine,  Sachs is also special advisor to United Nations Secretary-General Ban Ki-moon.

It wasn’t the first time that Mr. Sachs called for global coordination in regards to population control. In a September 2009 UN press release, Sachs not only lamented human activity on the planet, but argued  for scientists and engineers to take the steering-wheel in this process:

“We’re in the age of this planet where human activity dominates the earth’s processes. Humanity has become so large in absolute number and in economic activity that we have overtaken earth processes in vital ways to the point of changing the climate, the hydrologic cycle,” he told the UN Conference on Trade and Development.”

What kind of model does Sachs envision for his usurping utopia? He said it in an Economist publication in 2000:

“The model to emulate is the Rockefeller Foundation, the pre-eminent development institution of the 20th century, which showed what grant aid targeted on knowledge could accomplish.”

In his commentary The Specter of Malthus Returns, Sachs gives an adequate description of Agenda 21 without actually mentioning the UN plan for wealth redistribution and global population reduction:

“We will need to rethink modern diets and urban design to achieve healthier lifestyles that also reduce consumption. And to stabilize the global population at around eight billion, we will have to help Africa and other regions in speeding their demographic transition. We are definitely not yet on such a trajectory. We will need new policies to push markets down that path and to promote technological advances in resource saving. We will need a new politics to recognize the importance of a sustainable growth strategy and global cooperation to achieve it.”

Global government, in other words, to facilitate a global scientific dictatorship. The plan is ready.  The cards, as Sachs said, are on the table.

“The shortfalls in health, education, and population control are of course mutually interactive”, Sachs wrote in February of 2001 in the working paper: The Decade of Development: Goal Setting and Policy Challenges in India.

In order for this “global plan” to be adequately facilitated, Sachs figures, the need for global government is pressing. In the preparatory MDG Gap Task Force Report 2010, the Assistant Secretary-General for Economic Development (UN-DESA) sums up the needed action:

In an opinion-letter for The Economist, Sachs clarifies his opinion in regards to global fertility reduction:

“With sensible policies and international support, these very poor countries could do themselves a huge favour by reducing fertility rates sharply through voluntary means. The rich countries, on their part, could do themselves and the world a huge favour by putting their efforts into reducing their greenhouse-gas emissions and following through on promised aid, including for universal access to family-planning services, rather than on raising their own fertility rates.”

Now remember, this is the guy advising Ban Ki-moon on issues concerning population and other matters.

In a 2007 publication named Revamping U.S. Foreign Assistance, Sachs called for the “Reinvigoration of Global Population Policies”(page 22) in regards to the developing world:

“Total Fertility Rates often average 6 to 8 children per mother in impoverished rural areas, and notably in the impoverished dry lands. These regions are without reliable access to modern contraception and family planning services, despite the pledges of the world community to ensure universal access to sexual and reproductive health services by the year 2015. Much research has demonstrated that the failure of population control in the poorest countries poses enormous risks for those societies and for the rest of the world.”

In 2009, Sachs (yes, he is mighty productive) co-authored a paper with a certain Matthew H. Bonds on the subject of poverty in relation to infectious diseases (here is a slide show of their presentation). As it turns out, this Bond-character is a loyal protégé of Sachs. In his dissertation Sociality, Sterility, and Poverty; Host-Pathogen Coevolution, with Implications for Human Ecology, Bonds concludes that the best way to eradicate poverty is to, well… eradicate humans.

“We find that, after accounting for an income effect, reducing fertility may result in significantly lower disease prevalence over the long (economic) term than would a standard S-I-R epidemiological model predict, and might even be an effective strategy for eradicating some infectious diseases. Such a solution would make Malthus proud.”

“(…) the new model, which accounts for an economic effect, predicts that a reduction in fertility may be significantly more effective than a vaccine. It also illustrates that a sustained vaccination policy would be more likely to eradicate a disease if done in conjunction with decreased reproduction.”

O yes, don’t think for a second that their plans are not out in the open and in your face.

“This model is likely to understate the true benefits of reduced fertility because the effect of reducing the birth rate is to reduce the flow of susceptibles for all diseases, which is the equivalent of a vaccine for all infectious diseases at the same time.”

“Infectious diseases, however, continue to be most significant in developing countries, which experience relatively rapid population growth. The effect of this influx of children on the persistence and dynamics of childhood diseases, as well as on the critical vaccination coverage, is reasonably well-established (McLean and Anderson, 1988a; Broutin et al., 2005). But it is now warranted to turn this framework on its head: can fertility reduction be an integral element of a disease eradication campaign?”

In the interest of consistency, here’s Jeffrey Sachs again, attempting to sweet-talk and recruit future scientists for the upcoming UN Millennium Development Goals Summit. Always remember, when these globalist control freaks speak of “sustainable development” and such, there’s always a eugenic overlay.