This is sad to see. Like many others, I had a grudging respect for Bernie Sanders in the past. But the way he has cucked himself where Hillary Clinton is concerned is pretty pathetic.

I never expected him to endorse Trump, or anything like that, but he’s now in full grovel mode. And the Clintons are taking full advantage of his debasement.

Take a look at the tweet from him Hillary Clinton has actually paid to have promoted around Twitter: 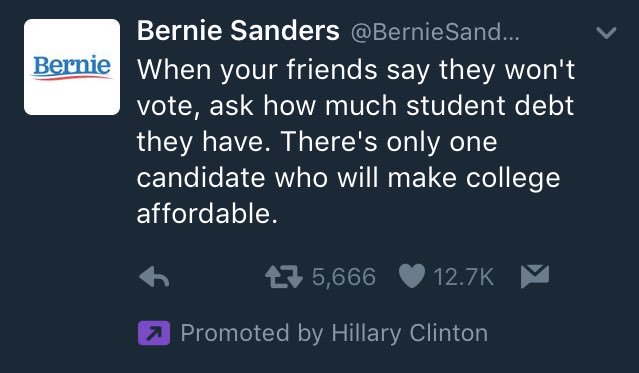 This election is enormously important for the future of this country. It is imperative that we elect @HillaryClinton [4] as our next president.

First off, there’s zero evidence Clinton will be making college affordable. She’s the one who received exorbitant speaking fees from colleges across the country [6]. Oh, and her husband also got paid millions of dollars to serve as a figurehead with a for-profit college [7]…the same kind of college Hillary now trashes. In case you don’t know, most for-profit colleges leave their students with shitloads of debt after promising students the sky (not that real colleges are 100% ethical in that regard, but they’re way better than those). It’s not like Mr. Trump has a spotless record [8] when it comes to them, obviously, but to hear Bernie tell it, the Clintons are going to be out for someone other than themselves for the first time ever.

I don’t buy it and neither should any rational person. I wonder how much trouble Bernie has sleeping at night after he’s had swallow his pride and become another cog in the Clinton Machine.