Joe Biden’s presidential campaign has announced it will take questions from voters rather than debate President Trump for the next event that was scheduled to take place on October 15.

Earlier today, the Commission on Presidential Debates revealed that it was shifting the second debate to a virtual only format due to Trump’s COVID diagnosis, prompting critics to argue this would help Biden because he is used to working out of his “basement”.

Trump immediately shot back, saying he would refuse to do a remote debate because “that’s not what debating is all about.”

"I'm not gonna waste my time on a virtual debate," Trump announces on Fox Business pic.twitter.com/OgHGlJ53wb

“I’m not going to waste my time on a virtual debate, that’s not what debating is all about. You sit behind a computer and do a debate, it’s ridiculous,” said Trump.

Now the Biden campaign says it will organize its own virtual town hall where the former Vice President answers questions from voters, “as he has done on several occasions in recent weeks.”

New stmt from @JoeBiden campaign: “Joe Biden will find an appropriate place to take questions from voters directly on October 15th…Given the President's refusal to participate on October 15th, we hope the Debate Commission will move the Biden-Trump Town Hall to October 22nd.” pic.twitter.com/oFOcKU4qG9

The campaign also called on the CPD to move the next full debate to October 22 so “the President is not able to evade accountability.”

The Trump campaign responded by putting out a statement asserting that “the swamp creatures” at the Commission on Presidential Debates were trying to save Biden from another disastrous debate performance and that “unilaterally canceling an in-person debate is pathetic.” 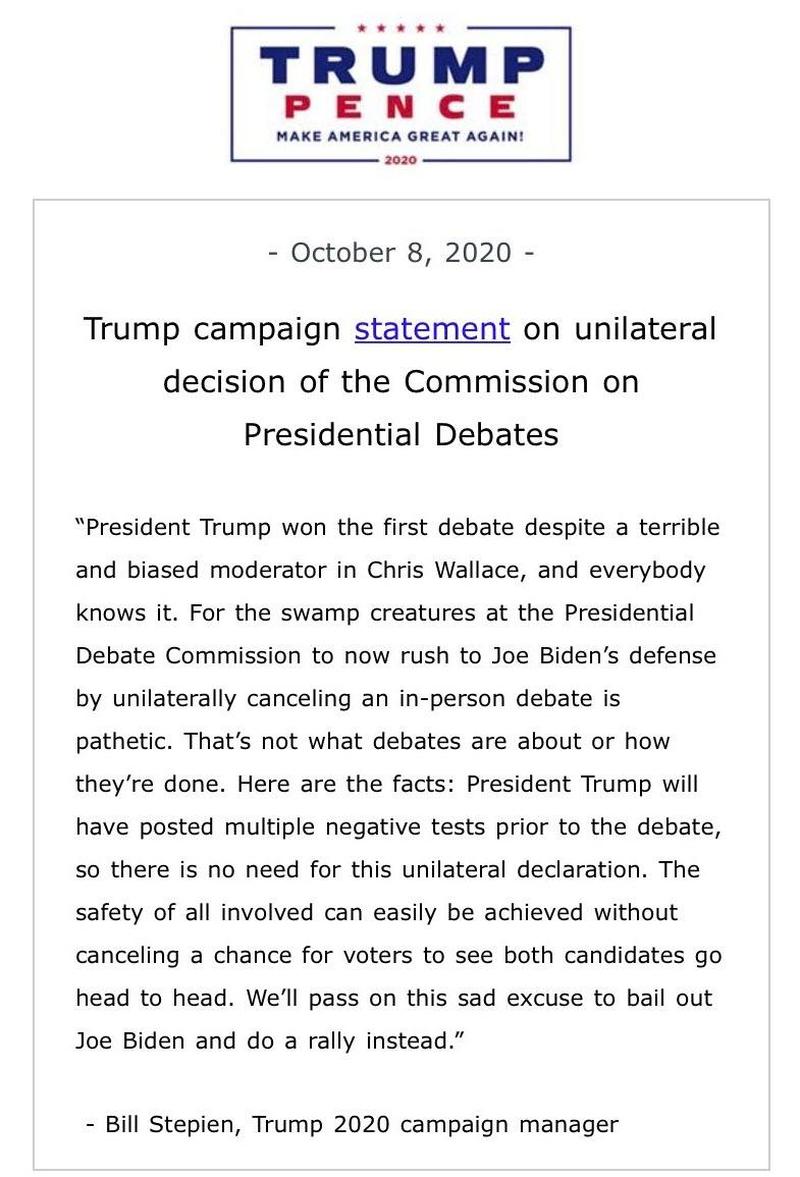 “President Trump will have posted multiple negative tests prior to the debate, so there is no need for this unilateral decision,” the statement added, charging that it was an “sad excuse” to “bail out Joe Biden” that that they would “do a rally instead.”