So this is some proper journalism what I just done.

Early this morning a Swiss website published a genuine-sounding list of delegates to this year’s conference. A couple of names leapt out, both of them Bilderberg alumni: Lord Mandelson (2009) and George Osborne (2006-2009).

Osborne, George, Chancellor of the Exchequer.

At long last the Treasury Press Office gave me a straight answer, but it wasn’t the answer I was expecting: “George Osborne is attending the Bilderberg conference in his official capacity as Chancellor of the Exchequer” – and he’s coming along “with a number of other international finance ministers.” Any Treasury staff? “Probably not more than one.”

So – ok – you mean we’re paying for Osborne to be here? You mean he’s on Treasury business? You mean this is an official summit? You mean he’s talking economic policy with the Chairman of Royal Dutch Shell, the CEO of Airbus, and Russian oligarch Alexey Mordashov, the billionaire CEO of Severstal? And Henry Kissinger? In secret? Behind a police cordon?

Then came the photo. It’s a bit washed out, but that profile… 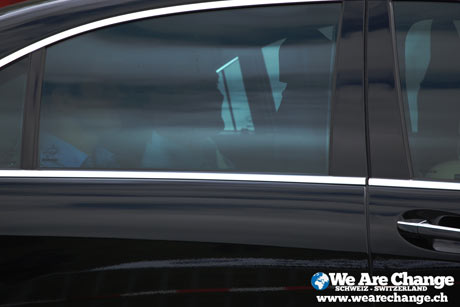