Globalist think-tanks are already building a case against Pakistan

by Tony Cartalucci
Prisonplanet.com
May 3, 2011

Foundation for the Defense of Democracy (FDD) scribe and all around intellectually dishonest propagandist, Bill Roggio of the “Long War Journal,” has dedicated his life to perpetuating the entirely fake “War on Terror,” abandoning all objectivity with the very name of his now officially government funded, Neo-Conservative establishment affiliated blog. The term “Long War” of course is a throwback to the Bush era and constant reassurances by the president that indeed the “War on Terror” will be endless. 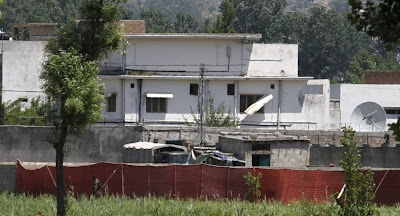 “Osama’s mansion:” Looking more like an LA crack house, it is more
likely that it was a CIA building hosting an “exercise” that went
“live” at the cost of multiple, unsuspecting lives. Of course, this is
just as credible as government claims which are based on evidence
either photoshopped, burned to the ground or at the bottom of the sea.

FDD and their doppelganger organization Foreign Policy Initiative – essentially the reincarnation of the Project for a New American Century (PNAC) – were amongst the first in the wake of Obama’s announcement to begin implicating Pakistan for harboring Bin Laden leading up to his death. These calls have only intensified.

Roggio’s recent article, “Pakistani complicity in sheltering Osama bin Laden is evident” lays out what appears to be a convincing argument that not only was Pakistan aware of Bin Laden’s presence in the city of Abbotabad, the center of Pakistan’s military and intelligence community, but were complicit in providing him with sanctuary. Roggio is quick to remind readers of Pakistan’s “vast links to terrorist groups.”

Despite arguing that Pakistan was knowingly harboring the most notorious fugitive in human history, Roggio suggests that the US kept the operation a complete secret from Pakistani intelligence until the operation itself was underway – and even then – the US did not reveal the location of the operation because of a supposed lack of trust. Unfettered, Roggio skips past this lapse of logic either out of his own lack of imagination or his utter contempt for his readership. Of course, if Osama Bin Laden was actually in Abbotabad, and Pakistan was providing him sanctuary, wouldn’t the compound itself be under constant watch? At the very least, after the operation was announced to Pakistani officials, wouldn’t they already know the exact location?

Roggio’s poorly contrived narrative, like the entire Bin Laden hoax itself, along with FDD and FPI’s entire existence is not meant to advance our understanding of the world but rather advance the agenda of the corporate-financier interests that drive these nefarious organizations. In this case, Pakistan stands as an obstacle on the war path that begins in the Middle East with the engineered, US-funded “Arab Spring” and stabs outward through Eastern Europe, Central Asia and as far as Moscow and Beijing.

Tensions in Pakistan have been rising dramatically as of late. Open calls from corporate-financier funded think-tanks have been made to literally carve Pakistan into smaller states via a US-funded insurrection in the province of Baluchistan. This is in direct response to Pakistan’s growing relationship with China and its increasing defiance against serving American interests in the region.

Globalist scribe Selig Harrison of the Soros funded Center for International Policy has published two pieces regarding the overarching importance of Pakistan in a broader geopolitical context and ways to bring about favorable “change.” Harrison’s February 2011 piece, “Free Baluchistan,” in name alone indicates yet another “freedom movement” contrived and fueled to give a favorable outcome to his corporate-financier patrons. He explicitly calls to “aid the 6 million Baluch insurgents fighting for independence from Pakistan in the face of growing ISI repression.” He continues by explaining the various merits of such meddling by stating, “Pakistan has given China a base at Gwadar in the heart of Baluch territory. So an independent Baluchistan would serve U.S. strategic interests in addition to the immediate goal of countering Islamist forces.”

Harrison would follow up his call to carve up Pakistan by addressing the issue of Chinese-Pakistani relations in a March 2011 piece titled, “The Chinese Cozy Up to the Pakistanis.” He begins by stating, “China’s expanding reach is a natural and acceptable accompaniment of its growing power—but only up to a point. ” He then reiterates his call for extraterritorial meddling in Pakistan by saying, “to counter what China is doing in Pakistan, the United States should play hardball by supporting the movement for an independent Baluchistan along the Arabian Sea and working with Baluch insurgents to oust the Chinese from their budding naval base at Gwadar. Beijing wants its inroads into Gilgit and Baltistan to be the first step on its way to an Arabian Sea outlet at Gwadar.”

Considering that Baluchi rebels are already being funded and armed to wage war inside of Iran, it is more than likely similar aid is being rendered to them to confront the ISI and Pakistan’s government. After a recent show of defiance by Pakistan calling on the US to halt all drone operations within its borders, the CIA responded with multiple attacks, the latest of which killed at least 22, including woman and possibly children, seemingly just to spite and incense this reassertion of national sovereignty.

Now, finding “Osama Bin Laden” in the heart of Pakistan’s intelligence and military community serves as an overt threat to Pakistan, with cheerleaders like Roggio already waving the accusing finger particularly at the ISI and leaving it for now, to our and Pakistani officials’ imaginations as to what the next logical course of action will be.

Pakistan is faced with two choices. Remain complicit with the West as it sets out to dominate the planet to Pakistan’s own detriment, or call the United States’ bluff – a bluff they have no way of making good on. Life is going to be miserable in Pakistan for the foreseeable future no matter what decision they make as they serve as a point of convergence for the West’s designs on Iran, China, and Russia.

Concurrently, while Washington poses as India’s ally, the sole purpose of this relationship is to manage the growth of competition in both China and across the entirety of Central and South Asia – including India. Perhaps India as well has been getting cold feet, unwilling to play its part against Pakistan and China, necessitating another convenient precision release from Wikileaks targeting the Indian government for rampant corruption – which in turn has generated an “anti-corruption movement.”

While India seems to hope the announcement of Bin Laden’s latest death will finally give America the excuse to make a graceful exit from the region, the warmongers who started and perpetuated the war, including FDD, FPI, and propagandists like Bill Roggio suggest it will only serve as an impetus to stay longer and expand operations further. Perhaps now would be a good time for India, Pakistan and China together to abandon this strategy of tension that ultimately serves none of their best interests and eject the West once and for all from their borders and the region as a whole. At the very least, it is most certainly time for individuals to claim back their personal and national sovereignty from a ruling elite that has clearly lost its mind.

For ways to battle the globalists by achieving self-sufficiency and freedom through independence please read on: