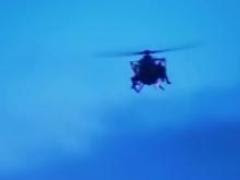 from kgw: Don’t worry – Portland is not under attack. Low flying military helicopters buzzing downtown Portland looked like a scene out of a movie. Monday night’s drama was all part of a military exercise. Newschannel Eight has learned, the Army and Navy are conducting Urban Military Training in Portland and Salem from August 17-30.

The training will include “low visibility movement, military operations in urban terrain, manual and low weight explosive breaching, fast-rope insertion, live fire” and other exercises according to a memo from Portland Mayor Tom Potter to the Navy’s Special Warfare Development Group.


A spokesperson in Mayor Potter’s office says, the military asked permission to conduct the training last November. The Portland Police Bureau’s specially trained SERT unit is involved in the training.

Monday’s exercise involved helicopters hopping from one downtown skyscraper to another. Many residents and downtown workers were concerned by the low flying helicopters. The Department of Defense provided no advance warning of the exercise.