Commercial real estate maturities will peak in 2012 – $350 billion in loans coming due and hundreds of additional bank failures. Bank lending in the CRE market collapsing

The commercial real estate disaster is sinking banks on a weekly basis.  Talk of a V-shape recovery is now largely a moot point since we are past the point of a quick and strong recovery.  The question now revolves around what we are going to face for the next few years.  Commercial real estate really is a harbinger of what went wrong in the last decade.  Banks and builders hungry for massive profits overestimated the demand for Starbucks and Macys locations around the country.  After all, you actually need money to spend and many average Americans are struggling just to pay their monthly bills.  The only way commercial real estate (CRE) was going to do well is if we had a booming population of young and wealthier professionals with more disposable income.  Yet that did not happen.

Even though the claim of building and bottom talk is now out there in the open, banks that actually lend the money for these projects have different ideas: 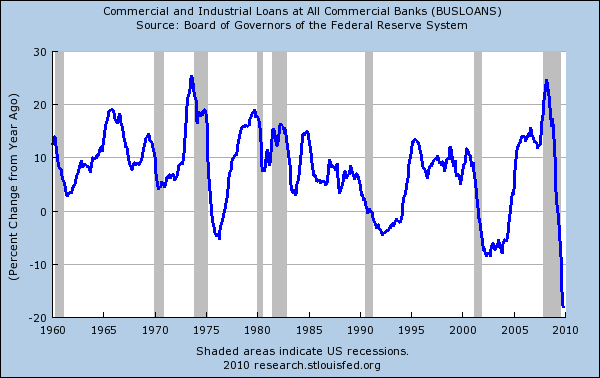 Lending for commercial loans has collapsed.  Even though banks would like you to believe that all is healthy and strong they have a front row seat to the carnage in the CRE market.  And with CRE locations you get an actual real feel of the economic problems we are facing.  Many Americans have pulled back on their spending and without spending many places simply cannot move forward.  Banks are also taking scissors to American credit cards and access to other people’s money is slowly going away.  The CRE market at one point was valued at $6.5 trillion.  Today it is closer to $3 to $3.5 trillion.  The loan amount at the peak was roughly $3.5 trillion so you had a nice equity cushion.  Today, the balance is nearly the same but the value of the collateral has collapsed: 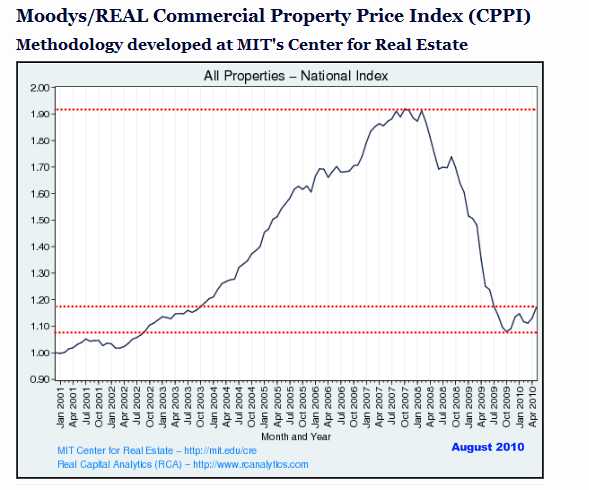 Although you see a slight increase, this is largely due to the massive amounts of government stimulus and bailouts.  The increase on the supply side also has to do with many businesses cutting inventories to rock bottom levels during the dark days of the crisis when the stock market seemed to be at a free fall.  Businesses restocked and this provided a nice little short-term boost but that was it.  Now we are burning through that and realize that we have an enormous amount of unused capacity in our economy.  In other words, there is little need for all the CRE out there in the market.

If we are to carefully examine the bank balance sheet of a too big to fail bank, what we find is that banks are now shifting their energy from funding new businesses to actually investing in the stock market casino.  Let us take a look at the balance sheet for Bank of America:

“The above tells you more of what is going on than what any media outlet will tell you.  What you see is a clear reduction in loans outstanding with BofA.  At the same time, you see a massive increase in more investment activities.  Wall Street has learned to leverage the easy money from the Federal Reserve to speculate on Wall Street instead of lending it out to Americans.”

Do you remember any U.S. Treasury head saying this was the actual plan?  Of course not but that is exactly what is happening with the trillions of dollars now backstopping the banking system.

The CRE market is a reason for that reduction in loan amount.  Many of the properties are defaulting and have to face the realization that they are worth a lot less than once thought.  Many of the borrowers bought the properties with optimistic cash flow scenarios that would never materialize.  You can buy a property for cash flow or appreciation purposes.  It looks like the vast majority bought for appreciation and we entered a period where prices crashed.  That is what we are now living through from a poorly calculated bet.

And the reality is we are merely entering the first few stages of the CRE bust with CRE loan maturities coming due: 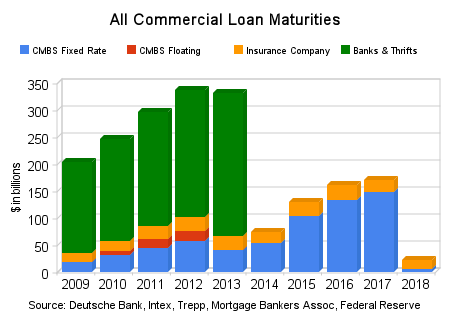 Does the above chart look daunting?  It should.  The peak won’t hit until 2012 when nearly $350 billion in CRE loans will come due.  And just look at the amount held by banks and thrifts.  This is why predicting another 1,000 bank failures (at least) is within the cards.  The connections between the banking sector and CRE run deep and we have a long way to go before we can say we are out of the economic woods.