The FBI’s new definition of what constitutes rape, set to be implemented next year, could ensnare TSA agents and outlaw pat downs because it defines penetration, “no matter how slight,” using any part of the body as a rape offense. 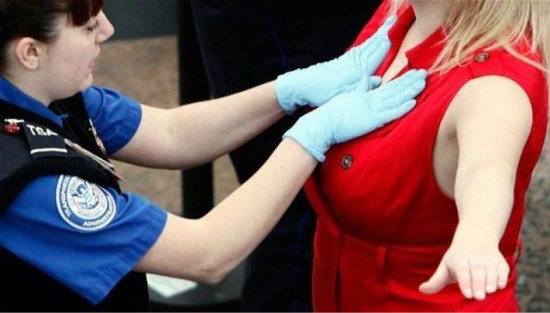 “The FBI’s definition of “rape” is about to get a long-awaited update, for the first time since 1929,” reports the New York Daily News.

The new definition, approved by the the FBI’s UCR subcommittee Advisory Policy Board back in October and set to be officially adopted by the FBI in 2012, states rape is, “penetration, no matter how slight, of the vagina or anus with any body part or object, or oral penetration by a sex organ of another person, without the consent of the victim.”

Crucially, the new definition removes the word “forcible” from the language.

Could the new definition of rape, which brings the FBI into line with guidelines already being used by law enforcement across the country, serve as a springboard for a new legal challenge to TSA pat downs, which in some cases have amounted to sexual molestation?

There have been numerous documented cases wherein TSA agents have physically penetrated the vagina or anus of a traveler during the course of a pat down. As we reported last year, TSA screeners are now being trained to physically put their hands down fliers’ pants as part of the pat down procedure.

The last major challenge to TSA authority came when the Texas legislature attempted to institute an invasive groping ban. The TSA responded by threatening to enforce a de facto no fly zone over Texas and the bill was ultimately shot down.

Earlier this year, journalist Amy Alkon wrote on her blog of how a TSA worker physically penetrated her vagina over and over again during a search.

“I sobbed even louder as the woman, FOUR TIMES, stuck the side of her gloved hand INTO my vagina, through my pants. Between my labia. She really got up there. Four times. Back right and left, and front right and left. In my vagina. Between my labia. I was shocked — utterly unprepared for how she got the side of her hand up there. It was government-sanctioned sexual assault,” wrote Alkon.

Alkon screamed “you raped me” to the TSA agent following the molestation, but when she went public with the ordeal the TSA threatened her with defamation charges and a $500,000 settlement demand, ordering her to remove the blog post.

An Ohio woman, blogger Erin Chase, also told Fox News last year of how a TSA agent touched her labia during a pat down at Dayton International Airport.

Former Miss USA Susie Castillo also revealed how a TSA worker touched her vagina during a pat down at Dallas-Fort Worth airport back in April after she refused to go through a body scanner.

The pat down controversy has erupted once again in recent days after three elderly women with medical problems claimed they were forced to undergo a strip-search at New York’s JFK International Airport.