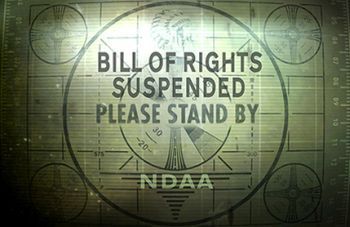 A Federal court in New York heard arguments Thursday for a preliminary injunction against the National Defense Authorization Act (NDAA), the bill signed by Obama that legislates for the ‘indefinite detention’ of American citizens without trial.

Hedges himself filed the class action lawsuit claiming that the ‘indefinite detention’ provision of the legislation, otherwise known as the ‘Homeland Battlefield Bill’, could see him sent to Guantanamo Bay simply for doing his job, and at the very least would have a “chilling effect” on the work of journalists and activists.

The controversial legislation, signed into law by Obama on New Years Eve, allows American citizens to be abducted and held in a detention camp anywhere in the world without trial under section 1031. Although Obama indicated in a signing statement attached to the bill that he would not use it to indefinitely detain American citizens, it was the Obama administration itself that requested the provision be worded so it would apply to US citizens.

“If there is no rolling back of the NDAA law, we cease to be a constitutional democracy. Totalitarian systems always begin by rewriting the law,” Hedges said. “They make legal what was once illegal… Foreign and domestic subjugation merges into the same brutal mechanism. Citizens are colonized. And it is always done in the name of national security.”

Reuters reports that during the court session Thursday, the judge said she was skeptical that the plaintiffs would win a constitutional challenge to the act, but also said she wanted to “understand the meaning to the ordinary citizen.”

The legislation specifically says that any persons deemed to have “substantially supported” al-Qaida and the Taliban and “associated forces” may be incarcerated without trial.

Hedges told the court that “I don’t think we know what ‘associated forces’ are. That’s why I’m here.”

“I could be detained by the US military, held in a military facility – including offshore – denied due process and incarcerated until ‘the end of hostilities’ whenever that is,” Hedges said, adding that his work was already being hindered, because of fears that in speaking to sources that the government could deem hostile, he could be held accountable.

“Any kind of language in my presence that countenances violence against the US … given the passage of the NDAA, really terrifies me,” Hedges said.

Other witnesses included Kai Wargalla, a German organiser behind Occupy London, and a supporter of WikiLeaks, who noted that British police had recently included Occupy London alongside al-Qaida on a terrorism warning notice.

“We are on a terrorism list just under al-Qaida and this is what the section of the NDAA is talking about under ‘associated forces’,” she said.

Author and campaigner Naomi Wolf, who is in the process of becoming a plaintiff in the case, read testimony in court from Icelandic MP Birgitta Jonsdottir, who has said that she can no longer travel to the US for fear she could be arrested for her association with WikiLeaks.

“[The NDAA] provisions create a greater sense of fear since now the federal government will have a tool with which to incarcerate me outside of the normal requirements of the criminal law. Because of this change in the legal situation, I am now no longer able to travel to the US for fear of being taken into custody as as having ‘substantially supported’ groups that are considered as either terrorist groups or their associates,” said Jonsdottir in the statement read by Wolf.

Judge Forrest asked government lawyers if the terms “associated forces” and “substantially supported” could be interpreted in different ways.

“I can’t take the statute and strike it down for what it says,” judge Forrest said, “but can Hedges and others be detained for contacting al Qaeda or the Taliban as reporters?” she asked Assistant U.S. Attorney Benjamin Torrance.

“What does substantially supported mean? How much is enough? When are someone’s activities substantial or insubstantial?” the judge asked.

Torrance responded by claiming that Hedges was “taking phrases out of context” and that the law would only be used against those found to have direct ties to al Qaeda and the Taliban.

“It is not proper for plaintiffs to come in and say they are chilled and what not.” Torrance added, saying that any support given to terrorists would “have to take place in the context of armed conflict” for it to be punishable under the NDAA.

Carl Mayer, a lawyer representing the plaintiffs, has argued that the U.S. military has already undermined the alleged “armed conflict” requirement with the court martial of WikiLeaks source Pfc. Bradley Manning, who leaked classified documents to the organization but did not offer “armed” support.

“Those definitions are so broad and vague that they can encompass, journalists, lawyers, or even the judge, and they are undefined in the statute,” Mayer said.

“It gives the lie to what they’re doing,” Mayer added. “Now, they’re prosecuting Manning, who did not give armed support but leaked documents [to WikiLeaks], allegedly.”

“The Homeland Battlefield Law is as Orwellian as its name implies. America is not a “battlefield”; it is a democratic republic,” Mayer urged. “This law is unconstitutional because it violates the free speech and due process rights of American citizens.”

The judge did not make an immediate rule on the motion, according to the Reuters report.

In January, Hedges appeared on the Alex Jones show to discuss the lawsuit:

For more information on the lawsuit against the NDAA go to Stop The NDAA.