Ultra-rich elitists lecture middle class on having less children, reducing living standards while living in opulence and procreating with gusto

Following the birth of the David and Victoria Beckham’s fourth child last week, the modern vanguard of the elitist, arcane and racist eugenics movement, now re-packaged as “overpopulation,” reacted by lambasting the Beckhams as a “bad example” for families, labeling them “environmentally irresponsible” for having too many kids. However, the leaders of this movement are almost exclusively comprised of ultra-rich elitists who themselves have numerous children and are rampaging hypocrites.

“The Beckhams, and others like London mayor Boris Johnson, are very bad role models with their large families. There’s no point in people trying to reduce their carbon emissions and then increasing them 100% by having another child,” said Simon Ross, chief executive of the Optimum Population Trust.

The scope of this article is not to debate the validity of the overpopulation argument, which in other reports we have vehemently debunked as unscientific quackery (the population of the planet is set to rapidly decline after 2050 and is already doing so in many countries), it is to expose the rampant hypocrisy of those telling us to lower our living standards, reduce CO2 emissions and have less kids while they themselves live in luxury, fly around in private jets, and procreate with little concern for “overpopulation”.

Just take a brief look at the lifestyle choices of some of the leading proponents of global warming and overpopulation movement, who while telling others to reduce their living standards and have less children, are themselves living in opulence with their giant families. 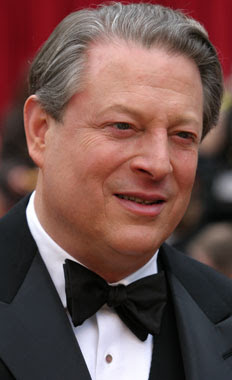 As the leading luminary of the global warming movement, you would expect Al Gore to live up to the standards he lectures everyone else about. Gore recently called on women to access “fertility management” (abortion) in order to stabilize global population.

However, just like the Beckhams, Gore has four children of his own, who presumably enjoy the luxury of his $8.8 million seaside mansion in Montecito, California (absent any worries about rising sea levels).

Gore is set to become the first “carbon billionaire,” but he offsets his 12-times the average power consumption by purchasing carbon credits ….bought largely from his own company, Generation Investment Management. Soros was one of the participants of a secretive 2009 conference of elitists which took place in Manhattan at the home of Sir Paul Nurse, a British Nobel prize biochemist and president of the private Rockefeller University. The meeting was focused around curbing ‘overpopulation’.

But Soros himself seems to have little personal interest in following a lifestyle consistent with his public persona – he has five children from two different marriages.

Illustrating this hypocrisy, Soros has given over a billion dollars to his family’s Open Society Institute, which issues grants to promote abortion.

Billionaire industrialist Warren Buffett has donated millions to charities and foundations that are involved in population control, including Family Health International, IPAS, Planned Parenthood and the Population Council. The money was used to develop drugs that sterilize women, as well as equipment used to carry out abortions in the third world. Only after his shareholders complained did Buffett cease such donations through his Berkshire Hathaway company in 2003.

However, Buffett was present at the 2009 “billionaire club” meeting in Manhattan, suggesting that his zeal for population control has far from waned.

Of course, Buffett’s desire to reduce overpopulation doesn’t apply to his own personal life, he has three children and travels the globe in a $6.7 million dollar private jet.

In 1992 at a UN Ambassador’s Dinner, Rockefeller gave a speech in which he decried the rapid rise of world population and its impact on “our planetary ecosystems”.

Another attendee of the “overpopulation” club in 2009, Rockefeller has six children and owns four mansion estates. He has poured millions of his fortune into global warming and overpopulation fearmongering.

Rockefeller doesn’t seem to fussed about his own half a dozen offspring’s impact on the “planetary ecosystem”.

Being the owners of the leading carbon trading exchange, the Rothschilds have been eager to spread the global warming/overpopulation myth with enthusiasm, particularly through the work of David Mayer de Rothschild (pictured) who has become a leading climate change campaigner.

The exchange is set to be worth $150 billion dollars by next year, continuing the Rothschilds’ historical legacy of manipulation, financial scams and rip-offs that have established them as the foremost banking dynasty on the planet.

The founder of the family, Mayer Amschel Von Rothschild, had no less than ten children.

“Mr. Turner – a long-time advocate of population control – said the environmental stress on the Earth requires radical solutions, suggesting countries should follow China’s lead in instituting a one-child policy to reduce global population over time. He added that fertility rights could be sold so that poor people could profit from their decision not to reproduce,” the Globe and Mail reported last year.

Turner’s call for western nations to enforce a tyrannical policy that in China is administered by undercover police and “family planning” authorities who kidnap, force drug and then forcibly abort babies of pregnant women, has nothing whatsoever to do with his concern for the environment.

Turner himself has five children and owns no less than 2 million acres of land. He is the largest private landowner on the planet, falling short of only the royal families of Europe. Turner has publicly advocated shocking population reduction programs that would cull the human population by a staggering 95%, a figure only achievable by outright genocide, mass abortion and infanticide. Prince Charles, the next King of England, routinely lectures the unwashed masses about sustainability and reducing their living standards. While stating that the “age of convenience” must come to an end to save the planet, in 2009 he embarked on a 16,000 mile round trip in a luxury converted Airbus with 14 of his staff at a cost of half a million dollars to browbeat people into limiting their carbon dioxide emissions.

While ordering the peasants not to eat beef to help mother earth and insisting that people “use less stuff,” Charles gorges himself on the finest cuisine prepared by the royal family’s chefs as he relaxes in the surroundings of his four mansion estates, including his Highgrove estate which covers over 900 acres.

The fact that the leaders of a movement that is trying to guilt trip the middle class into shying away from having children, suppressing their quality of life and obsessing about CO2 emissions, are ultra-rich elitists who come from huge sprawling family dynasties and spew carbon dioxide from every orifice as they gallivant around the globe living a life of opulence, should tell us something about the credibility of the message.

The overpopulation myth is a tool of control freaks, a discredited and arcane reinvention of the eugenics dogma, designed to oppress, micro-manage and enslave the population by imperiling them to stunt their freedom, prosperity and happiness, while its proponents are stinking hypocrites who would do the planet a huge favor by following their own advice and disappearing off the face of the earth for good.