Infowars has obtained a document from the New Jersey Office of Homeland Security & Preparedness that lists banal bodily activities such as yawning, staring and goose pumps as “suspicious activity” indicative of terrorism. 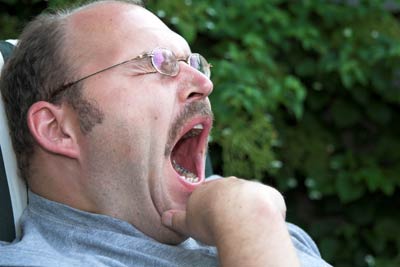 The document (PDF), entitled Terrorism Awareness and Prevention, is presented as a guide for both “residents and workers of New Jersey,” along with employees of federal, state and local agencies, on how to “assist in combating terrorism” by identifying “unusual or suspicious activities and behaviors.”

The guide encourages participants to “look for signs of nervousness in the people you come in contact with.” “Signs will become particularly evident in a person’s eyes, face, next and body movements.”

The document then lists examples of suspicious behavior indicative of terrorism, which include, “Exaggerated yawning when engaged in conversation,” “glances,” “cold penetrating stare,” “rigid posture,” and “goose bumps”.

Of course, any of these behaviors could be explained by a million other circumstances and the likelihood that they are indications of terrorist activity is virtually zero.

However, as we have seen from recent literature put out by the DHS or related law enforcement bodies, the standard for being characterized as a potential terrorist is getting broader and broader all the time.

Last month we reported on the FBI’s Communities Against Terrorism (CAT) program, which encourages store managers and staff of numerous different businesses to report examples of suspicious activity to the authorities.

In a flyer handed out to Internet Cafes, workers are encouraged to report people who use cash to pay for their coffee as potential terrorists.

Expressing an interesting in protecting online privacy when surfing the web in public is also characterized as a suspicious activity.

In a flyer issued to Military Surplus stores, the purchase of storable food supplies in bulk, an increasingly popular trend amongst “preppers,” is also defined as a potential indication of terrorism.

As Reuters reported in February, authorities are now treating those who “believe the United States went bankrupt by going off the gold standard” as extremists who are a potential violent threat to law enforcement.

Characterizing behavior which millions of Americans engage in every day as a potential indication of terrorism only serves to breed paranoia and distrust. If anything, it actually helps terrorists to blend in and not be identified, by increasing the chances exponentially of innocent Americans being mistaken for terrorists.