Oil prices are starting to spin out of control once again.  In London, Brent North Sea crude for delivery in February hit 91.89 dollars a barrel on Friday.  New York crude moved above 88 dollars a barrel on Friday.  Many analysts believe that 100 dollar oil is a virtual certainty now.  In fact, many economists are convinced that oil is going to start moving well beyond the 100 dollar mark.  So what happened the last time oil went well above 100 dollars a barrel?  Oh, that’s right, we had a major financial crisis.  Not that subprime mortgages, rampant corruption on Wall Street and out of control debt didn’t play major roles in precipitating the financial crisis as well, but the truth is that most economists have not given the price of oil the proper credit for the role that it played in almost crashing the world economy.  In July 2008, the price of oil hit a record high of over $147 a barrel.  A couple months later all hell broke loose on world financial markets.  The truth is that having the price of oil that high created horrific imbalances in the global economy.  Fortunately the price of oil took a huge nosedive after hitting that record high, and it can be argued that lower oil prices helped stabilize the world economy.  So now that oil prices are on a relentless march upward again, what can we expect this time?

Well, what we can expect is more economic trouble.  The truth is that oil is the “blood” of our economy.  Without oil nothing moves and virtually no economic activity would take place.  Our entire economic system is based on the ability to cheaply and efficiently move people and products.  An increase in the price of oil puts inflationary pressure on virtually everything else in our society.  Without cheap oil, the entire game changes.

The chart below shows what the price of oil has done since 1996 (although it doesn’t include the most recent data).  With the price of oil marching towards 100 dollars a barrel again, many people are wondering what this is going to mean for the U.S. economic “recovery”…. 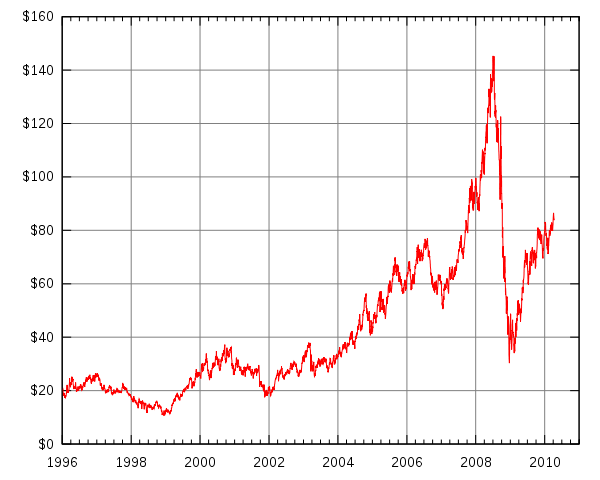 Just think about it.  What is it going to do to U.S. households when they have to start spending four, five or even six dollars on a gallon of gas?

What is it going to do to our trucking and shipping costs?

What is it going to do to the price of food?  According to the U.S. Bureau of Labor Statistics, food inflation in the United States was already 1 1/2 times higher than the overall rate of inflation during the past year.  But that is nothing compared to what is coming.

During 2010, the price of just about every major agricultural commodity has shot up dramatically.  These price increases are just starting to filter down to the consumer level.  So what is going to happen if oil shoots up to 100, 120 or even 150 dollars a barrel?

Demand for oil is only going to continue to increase.  Do you know who the number one consumer of energy on the globe is today?  For about a hundred years it was the United States, but now it is China.  Other emerging markets are starting to gobble up oil at a voracious pace as well.

Stock up for the Holidays with eFoodsDirect and get FREE Shipping!

If the price of oil keep going higher, it is really going to start having a dramatic impact on global economic activity at some point.  Meanwhile, oil producers and the big global oil companies will pull in record profits, and radical “environmentalists” will love it because people will be forced to start using less oil.

When it comes to oil, there are a lot of “agendas” out there, and unfortunately it looks like the pendulum is swinging back towards those who have “agendas” that favor a very high price for oil.

So what does that mean for all of us?

If the price of oil causes a significant slowdown in economic activity, it could also mean that a whole bunch of us may lose our jobs.

In an article that I published yesterday entitled “Tipping Point: 25 Signs That The Coming Financial Collapse Is Now Closer Than Ever“, I didn’t even mention that price of oil.  There are just so many danger signs in the world economy right now that it is easy to overlook some of them.

Yes, it is time to start ringing the alarms.

Many savvy investors are getting out of paper and are looking for hard assets to put their money in.  For example, China is buying gold like there is no tomorrow.  The Chinese seem to sense that something is coming.  But of course they are not alone.  All over the world top economists are warning that we are flirting with disaster.

On Friday, Moody’s slashed Ireland’s credit rating by five notches to Baa1, and is warning that even more downgrades may follow.

Just think about that for a moment.

Moody’s didn’t just downgrade Irish debt a little – what Moody’s basically did was take out a big wooden mallet and pummel it into oblivion.

The truth is that the euro is much closer to a major collapse than most Americans would ever dream.

The world financial system is teetering on the brink of another major financial crisis, and rising oil prices certainly are not going to help that.

If the price of oil breaks the 100 dollar mark, it will be time to become seriously alarmed.

If the price of oil breaks the 150 dollar mark in 2011 it will be time to push the panic button.

Let’s hope that the price of oil stabilizes for a while, but unfortunately that is probably not going to happen.

The truth is that the economic outlook for 2011 is bleak at best, especially if the price of oil continues to skyrocket.