The Department of Defense has confirmed foreign media reports that Russian troops are set to target terrorists on Americans soil as part of an unprecedented joint drill with the United States which will take place in Colorado next month. 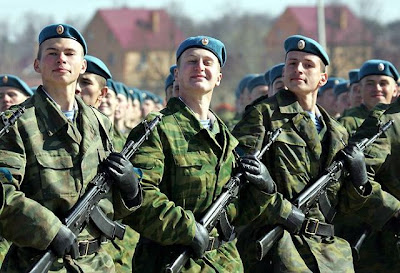 As we reported yesterday, Airborne troops from Russia are set to take part in drills focused around targeting terrorists at Fort Carson between May 24 and May 31. The soldiers will also be mingling with the local community, attending a baseball game in Colorado Springs during their stay.

Although it marks the first time Russian troops will train on U.S. soil, soldiers from a plethora of different nations have been involved in similar drills for well over a decade.

“The Russian soldiers are here as invited guests of the U.S. government; this is part of a formal bilateral exchange program between the U.S. and Russia that seeks to develop transparency and promote defense reform,” Cmdr. Wendy L. Snyder, U.S. Defense Press Officer for policy, told The New American in an e-mail. “This is the first time that American and Russian special operations troops have participated in a bilateral exercise.”

“According to Snyder, the exercises — which she said would last about three weeks in all — will serve to train and improve skills related to terror-war fighting. About 20 Russian soldiers will be participating, with most of the training to take place on the Fort Carson, Colorado, Army base and a mountain training area several hours away.”

The presence of foreign troops on U.S. soil has long caused consternation with many on the American right for a number of reasons, both historical and contemporary, stretching right back to when the British called upon German Hessian soldiers during the Revolutionary War.

More modern fears revolve around global UN peacekeeping troops being used to quell unrest inside America, an issue touched upon by Henry Kissinger during the 1991 Bilderberg meeting when he stated, “Today Americans would be outraged if U.N. troops entered Los Angeles to restore order; tomorrow they will be grateful.”

Drills such as FEMA’s 2009 NLE exercise, during which foreign troops worked alongside U.S. authorities, have led to concerns that the federal government would be forced to rely on foreign mercenaries to restore order, confiscate weapons or even incarcerate citizens during a national emergency, because of the likelihood that Americans would refuse to carry out such orders against other Americans.

One of the primary reasons why this story hasn’t gone viral is because doubt was cast on the issue when a known disinformation outlet (European Union Times) decided to embellish the details by adding completely manufactured nonsense about Russian troops “seizing the CIA’s main computer facility in Denver, the NSA’s main computer facility in Bluffdale, Utah, and taking control of main runways and terminals of the Denver International Airport.”

Despite the fact that these claims come from a source who is notorious for making a living out of fooling people into believing bogus stories, Glenn Beck’s The Blaze website carried them without retraction.

This in turn poisoned the well and led some to believe that the drills themselves, which are completely confirmed and admitted, were a hoax.

The Department of Defense’s acknowledgment that the exercises as described in the initial media reports are indeed taking place will hopefully put an end to this confusion and allow focus to return to the question of why Russian troops are training to kill “terrorists” on U.S. soil.