With the global elite in a race against time to enforce their draconian eco-fascist agenda before more of the public realize that the entire climate change con is a rigged game, alarmists are getting increasingly desperate and transparently thuggish in their rhetoric.

The mask of the man-made global warming movement is slowly being ripped away to reveal the true nature of what we face – a gang of hardcore control freaks who have hijacked well-placed environmental concerns as a vehicle through which to enact their religion of death – eugenics.

This was exemplified earlier this week [2] when Bill Gates was caught in a controversy after he advocated the use of death panels to make rulings on denying health care to the elderly. Gates’ justification that killing old people could save money to preserve jobs was a classic case of social cannibalism, the end justifies the means, and it revealed the true nature of the eco-fascist agenda.

The Bill and Melinda Gates Foundation funds vaccines for the third world to the tune of billions, and yet in his own speeches Gates has advocated using vaccines to lower global populatio [3]n, all in the name of reducing CO2 emissions and combating global warming. In other words, Gates invokes the vaccines he funds in the name of improving health care as a tool of forced sterilization. 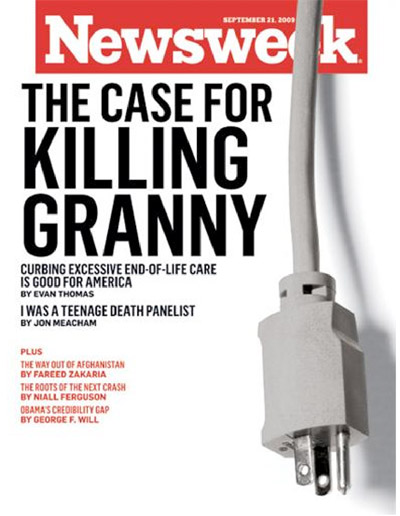 Gates’ call for death panels was mimicked by a September 2009 Newsweek article entitled “The Case For Killing Granny,” [4] in which writer Evan Thomas made the case for rationing health care by denying old people treatment.

This idea is embraced by a growing cult of climate change cult members, who are openly calling for freedom to be crushed and humans to be exterminated in the name of saving the planet.

Top environmentalist and creator of the Gaia hypothesis James Lovelock told the Guardian earlier this year [5] that “democracy must be put on hold” to combat global warming and that “a few people with authority” should be allowed to run the planet.

In a recent book, author and environmentalist Keith Farnish called for acts of sabotage and environmental terrorism in blowing up dams and demolishing cities in order to return the planet to the agrarian age. Prominent NASA global warming alarmist and Al Gore ally Dr. James Hansen endorsed Farnish’s book [6].

“The only way to prevent global ecological collapse and thus ensure the survival of humanity is to rid the world of Industrial Civilization,” writes Farnish in the book, adding that “people will die in huge numbers when civilization collapses”.

Another prominent figure in the climate change debate who exemplifies the violent and death-obsessed belief system of the movement is Dr. Eric R. Pianka [8], an American biologist based at the University of Texas in Austin. During a speech to the Texas Academy of Science in March 2006, Pianka advocated the need to exterminate 90% of the world’s population through the airborne ebola virus. The reaction from scores of top scientists and professors in attendance was not one of shock or revulsion – they stood and applauded Pianka’s call for mass genocide.

The current White House science czar John P. Holdren also advocates the most obscenely dictatorial, eco-fascist, and inhumane practices in the name of environmentalism. In his 1977 Ecoscience textbook, [9] Holdren calls for a “planetary regime” to carry out forced abortions and mandatory sterilization procedures, as well as drugging the water supply, in an effort to cull the human surplus.

Enforcement of the global warming doctrine in its many guises has become more aggressive, onerous and in-your-face as the years have gone by. With less and less believing in man-made climate change and with more and more understanding that eugenics is the real agenda behind the global warming bandwagon, the vitriolic nature of the propaganda has intensified.

Consider the message behind the infamous Greenpeace video which was first released in September 2007, which shows a mean-faced child exhorting selfish adults for causing climate change. The clip reminds us that even back then, alarmists were coming off as increasingly desperate in their aggressive propaganda ploys.

The intention behind the clip was a classic attempt at divide and conquer between the generations in a similar vein to how AGW alarmist Al Gore told kids not to listen to their parents. [10]

Basing his argument on discredited quasi-science, the boy donning a gangbanger hoodie warns that adults have had their chance to save the earth and now it will be the responsibility of the next generation to set things right — or set them right according to the globalist eugenicists. If the child’s facial expression is any indication, the effort will be less than kind.

The ugly endgame behind the global warming mantra is now crystal clear – rebranding climate change as “global climate disruption” [11] and overpopulation [12], eugenicists are intent on exploiting hyped fears about environmental apocalypse to set themselves up as Gods with the power to regulate, oppress, and even make life and death rulings over a subjugated population, who through sophisticated barrages of propaganda will be convinced to acquiesce to their own enslavement and ultimately slaughter.

Paul Joseph Watson is the editor and writer for Prison Planet.com [13]. He is the author of Order Out Of Chaos. Watson is also a fill-in host for The Alex Jones Show. Watson has been interviewed by many publications and radio shows, including Vanity Fair and Coast to Coast AM, America’s most listened to late night talk show.