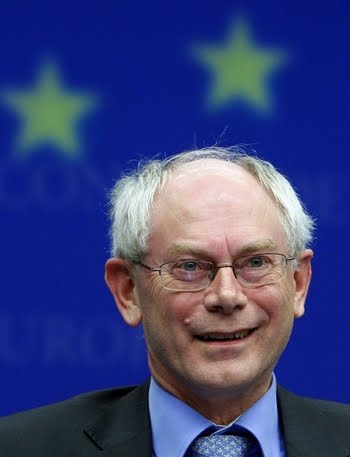 President of the European Council Herman Van Rompuy will join fellow elitists at the 2012 Bilderberg conference this week to discuss the collapsing euro and how the Greek debt crisis threatens to unravel the quest for a European federal superstate.

According to veteran Bilderberg sleuth Jim Tucker, Van Rompuy will be joined by former president of the European Central Bank Jean-Claude Trichet to wargame with other Bilderberg members on how to handle a potential Greek exit from the single currency system.

Van Rompuy’s presence at Bilderberg is particularly noteworthy given the fact that the Belgian attended a dinner organized by the Bilderberg Group in Brussels where he met with top Bilderberg steering committee members just days before he was announced as EU president back in 2009.

Van Rompuy held discussions with Bilderberg chairman Étienne Davignon, who earlier the same year had bragged to the EU Observer about how the Euro single currency was a brainchild of the Bilderberg Group. Van Rompuy also had a meeting with lifelong Bilderberg member Henry Kissinger.

Both Trichet and Van Rompuy have been staunch advocates of the single currency, in line with other Bilderberg members who, as we have highlighted, are desperate to prevent a Greek exit.

“Suppose that by mid-2013 Greece’s economy is recovering, while the rest of the eurozone remains in recession. The effect on austerity-addled Spain, Portugal and even Italy would be powerful. Voters there would not fail to notice the improving condition of their hitherto scorned Greek neighbour. They would start to ask why their own governments should not follow the Greek path and voice a preference for leaving the eurozone. In other words, the Greek experience could fundamentally alter the incentives for these countries to remain in the eurozone, especially if economic conditions remained grim,” writes Subramanian, adding that Greece’s potential exit “may prove an infectious model” and lead to the demise of “the eurozone and perhaps for the European project.”

The euro crisis has been a key talking point at each of the last three Bilderberg meetings. In both 2010 and 2011, political consensus formed by Bilderberg members was enough to keep the euro on life support for another 12 months each time, and the same globalists will once again try and hammer out a strategy behind closed doors that will provide redemption for their cherished pet project.

Jim Tucker’s inside source also told him that the prospect of a war with Iran would again be a topic of this year’s confab.

According to Tucker, Bilderberg members will be convening in the west wing of the Westfields Marriott Washington Dulles hotel.