Even the Fed Doesn’t Want to Hold U.S. Dollars

This is the scariest image in finance: 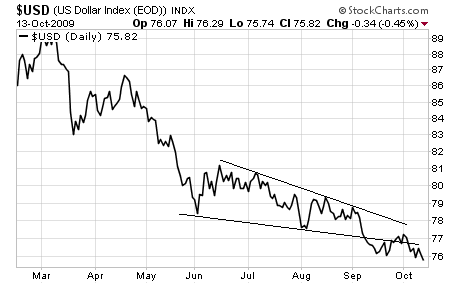 The above chart shows the dollar’s performance since the Fed announced its Quantitative Easing program in March. This chart tells us two things:

Regarding #1: When the financial crisis hit, the Fed realized it would need to keep interest rates low while it attempted to bail out the banks (80% of the $200+ trillion in derivatives sitting on commercial banks’ balance sheets are related to interest rates).

The problem with this is that it makes Treasuries very unattractive to foreign investors (China & Japan) who want a higher yield. Consequently, the Fed decided to pick up the slack by buying $300 billion worth of Treasuries through the now famous Quantitative Easing program.

As I noted last week, the Fed is now the largest buyer of US debt (it bought more debt than the next three largest buyers combined in 2Q09). China and Japan are no one’s fools. And they’re not going to fund a monetary policy that is both profligate and likely to erode the value of their dollar holdings.

Which brings us to item #2: the coming dollar crisis.

I am not a huge fan of technical analysis, but it is a useful tool for navigating a trader-heavy, liquidity driven, manipulated market such as today’s. On that note, I want to point out that the dollar began forming a falling bullish wedge pattern starting in June (see above chart). This pattern entails an ever-tightening range of lower highs and lower lows and typically precedes major breakouts to the upside.

As you can see, the dollar broke down out of this pattern in late September. It then rallied back up into the trading range before breaking down again. This is bad news. The next line of support (place where the dollar could bounce) is 76. We’ve already broken that one too.

Now the next line of support is 72. Now, the dollar has only fallen to this level once in the last 30 years (Summer 2008, see the chart below). If we fall below that, then we’re in uncharted territory and a major dollar devaluation is in the works. 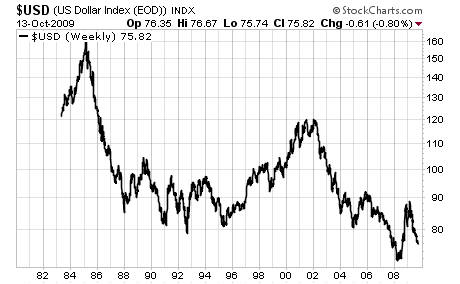 To review a point made earlier, the dollar has lost 15% of its value since March 2009. On an annualized basis, we’re talking about the dollar losing almost a third of its value in one year (30%). That is an absurd level of devaluation. And China, Japan, etc. have had enough. It is now clear that a flight from the dollar has begun; the Fed buys more US debt than the next three biggest buyers combined.

However, what most people don’t realize is that even the Fed itself is shifting away from the dollar. Everyone knows that China and Japan hold massive foreign reserves (the dollar). But the US Federal Reserve does this too (we own euros, yen, etc.). And for some reason the amount of foreign reserve assets (non-dollar assets) on the Fed’s balance sheet skyrocketed by 50% to $133 billion at the end of August.

Now, $133 billion in foreign reserves is nothing compared to China and Japan’s ~$3 trillion. But a 50% increase in one week is an astounding rate of change.

A 500% increase in SDRs: the “global” currency issued by the IMF. The blog ZeroHedge caught this story first and pointed out that SDRs are the IMF’s means of maintaining a “super reserve” currency for the world. SDRs are defined as: a basket of currencies, today consisting of the euro, Japanese yen, pound sterling, and U.S. dollar.

Now, one has to wonder why the US Federal Reserve decided to suddenly buy $40 billion worth of SDRs overnight. The answer is that the IMF decided to massively increase the amount of SDRs outstanding from SDR 21 billion to SDR 204 billion in late August.

This came as part of a G20 decision made in April 2009 to stabilize the global financial system. Interestingly, of the countries involved in buying SDRs, the US bought the most at SDR 30 billion, compared to Japan (SDR 11 billion), and China (SDR 6 billion).

I realize this is getting a bit technical. But in simple terms this means that the US Fed intentionally participated in a world reserve currency scheme that devalued the dollar.

Folks, even the Fed doesn’t want to own dollars. It’s time to look for a currency that can’t be devalued.