The press erroneously made this claim despite the fact that the emails were turned over to lawyers as part of routine discovery in the case.

“As we discussed last week, the Federal Bureau of Investigation (“FBI”) in New Haven has conducted a forensic examination of the hard drive provided by the Koskoff firm,” states the letter which was sent to attorney Norman Pattis. “During that analysis, the FBI examiner discovered emails that contained possible images of child pornography. The file paths for these emails are set out in Attachment A hereto, along with the two email addresses that the emails originated from and a folder located on the drive that also contains this data.”

“I request that to the extent you have any of these files or emails on any device here in the District, you should take all necessary steps to delete that data. The Government represents that because any such deletion is coming at our request, your deletion of these files will not be considered destruction of evidence or obstruction of justice. The FBI will maintain physical
custody of the hard drive in New Haven.” 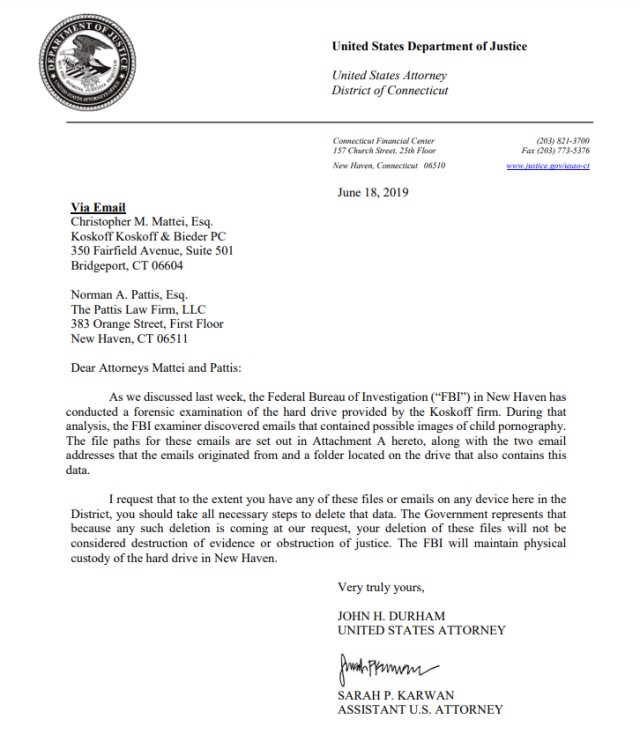 Infowars gladly complied and immediately deleted the files from its servers. The FBI also sent Infowars tracking data for the emails which will help in finding the actual culprit.

This illustrates once again how the press ran one of the clearest examples of fake news ever seen, framing Infowars as the culprit when they were in fact the victim.

However, the damage has been done. Most people will have simply read the headlines and never do any follow up research.

Will any media outlets perform basic journalistic due diligence and issue retractions, or will this monumental lie become just another thread in the fabric of fake news?