A 32-year-old former Marine had his guns seized at the direction of the FBI in August after he allegedly said he would kill antifa members in self-defense if “they start killing us.”

Though the media is trying to paint this Iraq war veteran as a villain, he was not charged with any crime and insists he was trying to prevent an already violent situation from escalating.

Shane Kohfield stood outside the home of Portland’s mayor in July wearing body armor and a “Make America Great Again” baseball cap, a large knife strapped to one shoulder and a copy of his concealed weapons permit displayed on the other.

Using a loudspeaker, he warned the right-wing activists who turned out to condemn the city’s handling of recent violent demonstrations that they needed to protect themselves against their anti-fascist, or antifa, rivals.

“If antifa gets to the point where they start killing us, I’m going to kill them next,” Kohfield, 32, said. “I’d slaughter them and I have a detailed plan on how I would wipe out antifa.”

That threat pushed the FBI’s Joint Terrorism Task to take a series of extraordinary steps against Kohfield, including temporary seizure of a cache of his firearms under Oregon’s new “red flag” law aimed at preventing gun violence, The Oregonian/OregonLive has learned.

The task force also had the ex-Marine committed to a veterans’ hospital in Portland. He spent the next 20 days there.

Imagine what the feds could do if they went after antifa the same way they’re going after Trump supporters.

Here’s video from around the same time period much of this case occurred where an antifa thug tells journalist Andy Ngo that “death is coming to you.”

“I’m known to do this shit for real,” an antifa protester said to me. “Are you willing to die for Youtube shit?…Death is coming to you.” pic.twitter.com/bhK2wWkMBD

Did the FBI order Oregon police to seize his guns and have him committed?

He was filmed at another rally in Portland on August 17, 2019 aggressively getting in people’s faces and was eventually detained, though I don’t know whether he was hit with any charges.

The moves came as city officials and law enforcement prepared for potentially violent clashes Aug. 17 during a right-wing rally and counterprotests planned in downtown Portland that had become inflamed with incendiary political rhetoric nationwide. Police worried that they would end in catastrophe.

Though Kohfield wasn’t accused or charged with any crimes, police took no chances and prevented him from attending the rally as he repeatedly had promised to do on social media after his confrontation at Mayor Ted Wheeler’s house.

They didn’t stop Mr. “Death Is Coming To You” from attending!

The episode shows that federal law enforcement may be beginning to take a more aggressive tack toward potential political threats, said Michael German, a retired FBI agent and fellow at the Brennan Center for Justice at New York University Law School.

“Clearly, this latest incident shows how effective proactive policing can be in reducing the chance of violence,” said German, who has monitored political street clashes in Portland and other parts of the country over the last few years.

“It also makes you wonder if they’d been proactive from beginning whether all of this would have grown into the menace it has become.”

What this actually shows is the FBI is aggressively arresting right-wingers for thought crimes.

He returned home Tuesday from the VA hospital and maintains he never planned to hurt or maim other people. But he understands why he alarmed police.

“I looked unhinged. I looked dangerous and have the training to be dangerous,” said Kohfield, who lives with his father in Canby and receives disability payments for physical and psychological injuries he sustained during two tours of duty in Iraq. 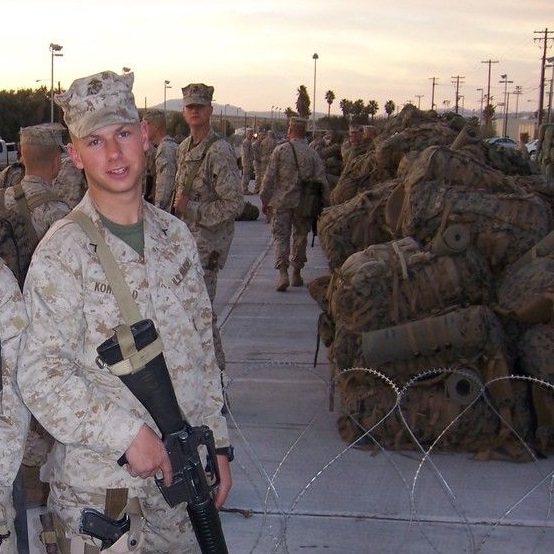 By leveling vicious warnings, Kohfield said, he hoped to deter others from causing physical harm.

A supporter of President Donald Trump, Kohfield said he isn’t affiliated with Patriot Prayer, the Proud Boys or other right-wing groups that have organized marches and demonstration throughout Portland over the last 2 ½ years, some that have devolved into bloody brawls and riots.

His protest activity, he said, has been limited to the event outside the mayor’s house and a right-wing rally last fall in downtown Portland, both organized by local conservative activist Haley Adams.

“I was watching on the news that city of Portland did nothing to protect the people against antifa,” Kohfield said. “I figured I’d show up to protect these people.”

By the time he popped up at the mayor’s house, Kohfield was already on the FBI’s radar.

He had landed there in March after he sent a letter to Texas Rep. Dan Crenshaw, a first-term Republican congressman and former Navy Seal, according court documents filed in Clackamas County.

The five-page letter, included in the court filings, accused Portland’s mayor and police of permitting anti-fascist activists to commit “savage attacks” against conservatives at protests, including the November rally where Kohfield said he was assaulted by masked demonstrators.

Kohfield shared video on DropBox of antifa attacking him and posted a picture of his injuries.

Kohfield told Crenshaw that Congress needed to take immediate steps to declare antifa a terrorist organization. Otherwise, he and other veterans would have no choice but to begin systematically killing antifa members “until we have achieved genocide.”

Kohfield included a detailed outline of how he would carry out the mission, which he argued would be legally justified if the federal government refused to act.

The U.S. Capitol Police shared the letter with the FBI’s Portland office, which assigned the case to a Clackamas County sheriff’s deputy serving on the area’s Joint Terrorism Task Force, court records show.

Deputy Jeremy Stinson interviewed Kohfield and his father at their home in April, according to the court documents.

Stinson learned Kohfield had served in the Marines and kept guns in the house. Kohfield told the deputy he would defend himself the next time members of antifa attacked him.

Nearly four months after the visit, the deputy was notified that Portland police had opened a non-criminal inquiry known as a threat investigation in response to the remarks Kohfield made July 20 at the mayor’s house.

“I can’t say that he won’t kill someone,” Kohfield’s father told Portland police during their investigation, according to court records.

He also told police that his son was taking medication for bipolar disorder, drinking heavily and had become increasingly agitated.

“(Kohfield’s father) provided that Shane was really upset by Portland’s ‘liberal government’ and the state of the federal government,” the court documents read.

Stinson included all these details in a July 25 affidavit seeking an “extreme risk protection order” against Kohfield, which a judge approved the same day.

Such protection orders, introduced in Oregon in 2018, allow authorities to pry guns from people not convicted of a crime who show signs they might shoot themselves or someone else.

Each protection order stands for a year but can be extended indefinitely. Those who have their guns taken away can appeal the decision.

[…] It’s not clear why law enforcement waited nearly two weeks to serve the order, but they did so only days after a pair of deadly mass shootings in El Paso, Texas, on Aug. 3 and Dayton, Ohio, the following day.

Trump ordered the DOJ to engage in this type of “pre-crime” policing right after those shootings.

Kohfield, who was unarmed, said at least a dozen officers stopped him while he was leaving a relative’s home outside Prineville.

Officers said they planned to take Kohfield to the VA hospital in Portland. He said they then served him with the protection order.

“I was told that I didn’t have a choice,” he said. “The cops were great. They were respectful and compassionate.”

Kohfield said he was placed under psychiatric observation for five days. He said that he then volunteered to remain at the VA hospital for another two weeks.

According to Lemman, the state court administrator, Kohfield surrendered an AR-15, a pistol, a rifle and a shotgun.

The ex-Marine said he is done with attending protests or political demonstrations in Portland.

“I have done everything I can possibly do to keep both sides from killing each other,” he said. “As long as they keep duking it out like this, it will achieve nothing.”

You can read Kohfield’s side of the story on his website.

“Every single police report and all my medical records will confirm that I specifically said over and over again that I had no desire to harm anyone and that I was using psychological warfare to try and prevent you from killing each other,” Kohfield said Saturday night on Facebook. “If I was in the Marines still they would call me a brilliant strategist but because I’m a veteran they call it mental illness.”