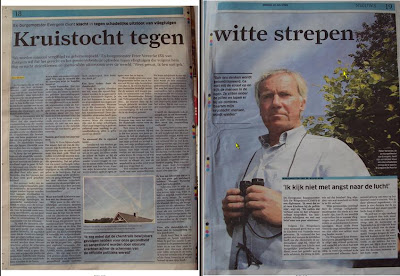 “We are massively being poisoned and brainwashed” Former mayor Peter Vereecke (53) of Evergem wants the justice department and the city council to act against planes that are according to him spraying day and night disease causing germs and chemicals all over the world. ”Rest assured I am not insane”

“Don’t confuse this with contrails”, said Vereecke. “Those are harmless condensation trails that are only visible for a few seconds. On the other hand chemtrails are clouds of chemicals and disease causing germs that are deliberately sprayed on us to manipulate our behaviour. De councilmen and – women were stunned and listened to his every word. At last some other subject than a loose tile or a backed-up sewage pipe.

“I hope that the city council mobilizes all possible government ministries to fight this mental and physical attack. I have already filed two complaints with the local police, but they don’t to anything with it”, said Vereecke. Could it be that they had a good laugh with it?

The internet is full of conspiracy theories about chemtrails: the spray planes that are supposedly being used to conduct massive sterilisations in populated areas, for large vaccination campaigns and genetic manipulation of humans and plants, for the spread of epidemics, for the subjugation of populations, to manipulate weather and to combat climate change. Or a combination of the above.

“I find the theories all very interesting but I don’t choose a side” says alarmist Vereecke. “I’m only saying that the chemtrails have provable effects on our health en that they are being conducted by hidden power structures behind the veil of the official political world. Don’t make any illusions: what we see are merely puppets. Even Barack Obama is a puppet. De real powers are hidden under the lee.”

Can you be more specific? Who are the people that are really pulling the strings?

Peter Vereecke: “Those are the co-called Illuminati, the enlightened ones. They are members of secret societies like the Bilderberg group, but are also active in business and global organisations like the United Nations and NATO. It’s not about one certain group but about a type of person with a certain DNA that is common in higher levels of power: people that do not care about the value of human life and are obsessed with power, money and control.

Names, give us a few names.

“Take Al Gore for example. He is member of the illuminati. His message about global warming only has one purpose: money. Because worldwide we will have to pay for the coming measures. That will result in higher taxes and higher food prices and environmental measures in business. That will result in a massive cash-flow. Meanwhile it is confirmed that human activity only accounts for 3% of the global warming.”

But what does Al Gore have to do with chemtrails?

“My point is this: all global processes revolve around money, power and control. De brains behind the chemtrails are at the top level of the pharmaceutical and chemical industries. 100 years ago for example, 1% of people got cancer. Today that number is one in three. Dat is very convenient for some people. The cancer cure industry is a billion dollar business. Just like the treatment of so many other diseases that are skyrocketing in the last 10-15 years. Alzheimer, Parkinson, autism, ADHD, asthma, diabetes, allergies,…we have never been so sick as now. Our physical, emotional and intellectual health is being systematically undermined. How do you explain that?”

“Voilà. They certainly play a role in this because the spray planes are being used more intensively the last few years. You can observe the phenomenon in our country at least 10 days per month. Why don’t you see these chemtrails above the Sahara of the Amazon? Spraying chemicals over there would be useless as there are no people living there. Our whole environment is chemicalized: our food, healthcare, everything is based on chemistry.”

No one takes action…

“Because our thinking processes are being conditioned. Look at the eyes of the people in the street, they are medicated and walk around like zombies. A dull look without “joie de vivre” and without an outlook on life. Hence my crusade: people wake up, open you eyes, act before it is too late…”

“I will call the current mayor to hear what he is going to do with my message. I want him to make clear to the higher bodies that people are concerned. The Ministry of Defence, the Ministry of the Interior, the Department of Health, the Ministry of the Environment… they need to be told about these concerns and our outrage. I don’t want this to be covered up.

I can imagine people calling you insane: “Mister Vereecke has seen the light”

“Not to my face. And probably also not behind my back because I have solid curriculum and a strong image. Most people remember me as philologist, mayor and business man. Not as a dreamer or crazy person but as a sober, critical and level-headed person that is looking for answers.

Just to confirm: you are not being treated psychologically at the moment.

(laughs hard) “No I feel mentally and physically fit. But I must admit if I were currently in the city council and someone would start talking about white lines in the sky, I would ask if that person Peter Vereecke is all there.