Has Boumaaz been fired from his position in Montpelier? No. If he had expressed opposition to jihad terror and Sharia oppression of women and others, would he be fired? He wouldn’t even have been hired. 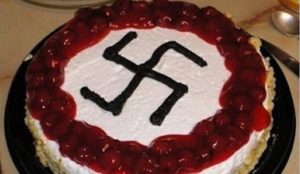 An official in the French town of Montpelier celebrated his birthday with a cake decorated with a swastika, which he described as “a gift from my SS friend.”

Djamel Boumaaz posted an image of the cake on his Facebook page, the Simon Wiesenthal Center said on Thursday.

The full text of the post celebrating his 40th birthday read: “I spent a beautiful day with my family, music, food in the home of my SS friend, then my birthday cake arrived, a gift from my SS friend.”…

In 2016, Boumaaz was investigated by city prosecutors for his Twitter account, which was marked “forbidden to dogs and Jews” and featured tweets mocking and denying the Holocaust.