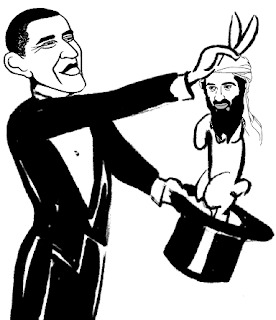 Now we are told the notoriously deceptive CIA has “killed” “Osama Bin Laden” in Pakistan. This is the same CIA that planned to create fake videos of Saddam depicting him as a homosexual, and actually did make fake videos of Osama Bin Laden depicting him drinking liquor and consorting with boys. Washington Post’s “CIA unit’s wacky idea: Depict Saddam as gay, [4]” stated, “The agency actually did make a video purporting to show Osama bin Laden and his cronies sitting around a campfire swigging bottles of liquor and savoring their conquests with boys, one of the former CIA officers recalled, chuckling at the memory. The actors were drawn from “some of us darker-skinned employees,” he said.”

Is there any reason at all for us to suddenly start believing our degenerate criminal government now, in light of their habitual, continuous, murderous campaign of lies and deception directed at both the American people and the world as a whole? The answer is not only unequivocally “no,” but we must try to understand why such a “rabbit” has been pulled from the globalists’ hat at this point of time. It smacks of almost cartoonish desperation as the US Dollar is crashing [5] and the world’s opinion turns sharply against an overtly aggressive NATO [6] carrying out a Hitlerian campaign of military invasion in North Africa.

Stock up with Fresh Food that lasts with eFoodsDirect (AD) [7]

[8]
We must continue to focus on real issues. Not birth certificates of a man who has not made a single decision or spoken a single word of his own since taking office, and not the alleged death of the already long dead Osama Bin Laden who, to this day, has had zero evidence linking him to the attacks of 9/11. 9/11 was an inside job [9], the subsequent wars were built on a fraudulent foundation of malicious lies – and as Americans celebrate in the streets over the death of this ultimate bogeyman, they seem oblivious to the fact that US air support is aiding and abetting real, admitted terrorists in Libya’s east [10] who undeniably have American blood staining their hands.

Let us quickly sweep this stunt under the rug of irrelevancy where it belongs, and continue undermining the efforts of this degenerate empire as we remove and replace their strangling, parasitic tentacles. Let us stand vigilant against false flag attacks fashioned as “acts of retribution” for the now allegedly dead, former CIA agent Osama Bin Laden. It is time Americans seize back their destiny and stop living their lives as a series of knee-jerk reactions to infantile propaganda and the constant parade of manufactured threats brought before us.