GOA Chief: Super Congress ‘Will Lead Us Into Dictatorship’

New committee is a “coup d’état” by the ruling class 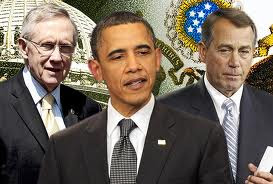 Gun Owners of America chief Larry Pratt warns that the new “Super Congress” created by the debt deal will lead America into dictatorship, labeling the move a “coup d’état” by the political class aimed at transforming the entire structure of government in the United States.

Comparing the super committee to Plato’s council, Pratt pointed out that it would take just 34 Senate votes to sustain a bill put forward by the group, noting that it has been set up specifically to prevent lawmakers getting in the way of its agenda by necessitating a super majority to overturn anything introduced by the committee.

“The first act of the next Congress hopefully is going to be to repeal this horrible piece of legislation, Pratt told the Alex Jones Show, adding that the committee could be used to target gun owners, property owners, taxpayers and businesses.

“This is a game changer, they’ve decided that we don’t need the House of Representatives to originate revenue bills, we’ll just have the ‘super 12’ do that,” said Pratt, adding that Barack Obama would become the de facto deciding 13th member.

Legislation decided on by the Super Congress would be immune from amendment and lawmakers would only be able to register an up or down vote, eliminating the ability to filibuster.

Pratt warned that John Boehner and Mitch McConnell would appoint “wusses” to the committee, a point emphasized by reports which indicate lawmakers who voted against the debt hike will be barred from selection for the Super Congress. Just two weeks ago McConnell himself argued that the power of the purse, constitutionally ascribed to Congress, should be turned over wholesale to Barack Obama.

“They’re going to put ‘reasonable people’ on there – and these reasonable people will be the ones that continue to lead us into dictatorship,” said the Gun Owners chief, adding that the move represented a coup d’état by the ruling political class, who are now busy characterizing those who oppose their agenda as “terrorists”.

Pratt noted how the debt bill was passed on the back of similar threats made before the 2008 bailout vote that warned of an economic apocalypse if an agreement was not reached.

“They had us all breathless that the country, if we didn’t have something happening today, was going to default. That was a lie and they continued to use it even after members of Congress explained many times, no we don’t default….they stampeded a lot of members of Congress into this,” said Pratt, adding that lawmakers figuratively had a gun put to their head.

The legislation is aimed at discovering “what special interests are trying to influence the committee,” according to Vitter.

“We’re talking trillions in cuts, and there are already threats to increase taxes on many job creators. We need to see full transparency and accountability because these committee members will be making huge decisions with a lot on the line,” he added.

The whole partisan theater behind the debt debate appears to have been largely “manufactured,” as President Obama himself labeled it, as a smokescreen behind which to implement the unconstitutional Super Congress. The so-called “cuts” enshrined in the debt deal aren’t even cuts.

Talking points based around the notion that the “Tea Party won the debt battle” are a complete misnomer. All the bill does is put spending caps on already planned expenditures towards the end of a ten year period. The “spending cuts” are virtually non-existent, yet a further crippling $9.5 trillion will be added in debt over the next decade.

Watch the interview with Larry Pratt below.