Brown’s 1954 book acknowledged carbon dioxide, now classified as a threat to human health by the EPA, as a life-giving gas 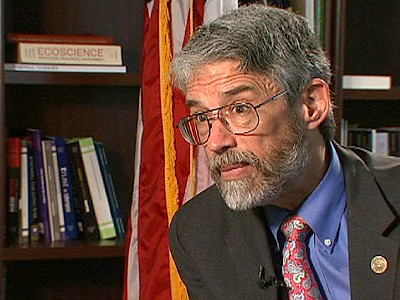 The guru of President Barack Obama’s science advisor, John P. Holdren, who in his 1977 book Ecoscience called for draconian population control measures including sterilizing the water supply and introducing forced abortions, wrote that large amounts of carbon dioxide should be pumped into the atmosphere in order to aid plant growth and solve the food crisis.

Lamenting on page 140 of his 1954 book The Challenge of Man’s Future, Harrison Brown – a geochemist who supervised the production of plutonium for the Manhattan Project, wrote that “the earth’s atmosphere contains only a minute concentration – about 0.03 percent” – Brown observed, “It has been demonstrated that a tripling of carbon-dioxide concentration in the air will approximately double the growth rates of tomatoes, alfalfa, and sugar beets.”

Brown was a guru to White House science czar John Holdren, who co-edited a 1986 book in his honor.

Holdren acknowledged Brown’s book transformed his thinking about the world and “about the sort of career I wanted to pursue,” writes World Net Daily’s Jerome Corsi.

“There are between 18 and 20 tons of carbon dioxide over every acre of the earth’s surface,” Brown noted on page 142. “In order to double the amount in the atmosphere, at least 500 billion tons of coal would have to be burned – an amount six times greater than that which has been consumed during all of human history.”

The fact that Holdren was a disciple of Brown again goes to show how dramatically Holdren’s convictions about climate change have flip-flopped in order to accommodate whatever scientific fad holds sway at the time.

In the 70’s, Holdren was busy talking up the drastic threat of global cooling, warning that it would produce giant tidal waves and environmental devastation.

In a 1971 essay entitled “Overpopulation and the Potential for Ecocide,” Holdren and his co-author Paul Ehrlich wrote that global cooling would ensue as a result of , “a reduced transparency of the atmosphere to incoming light as a result of urban air pollutions (smoke, aerosols), agriculture air pollution (dust), and volcanic oil.”

Holdren and Ehrlich predicted, “a mere 1 percent increase in low cloud cover would decrease the surface temperature by .8C” and that “a decrease of 4C would probably be sufficient to cause another ice age.”

They continued: “Even more dramatic results are possible, however; for instance, a sudden outward slumping in the Antarctic ice cap, induced by added weight, could generate a tidal wave of proportions unprecedented in recorded history.”

Of course, Holdren and his ilk were spectacularly wrong with their doomsday predictions about global cooling, but almost entirely the same crowd are now telling us that global warming is a gargantuan threat and that only a carbon tax paid directly to the World Bank can stop it.