How a Crashing Dollar Hides Trends

Many Americans have a hard time wrapping their mind around a declining currency or the hidden tax that is inflation.  The U.S. Treasury and Federal Reserve understands this and for decades has exploited this issue to slowly siphon off the buying power of the U.S. dollar. Openly they tell the public that they are for a strong dollar policy but every action they take is guided to slowly debasing the currency.  Take for example the current stock market rally.  The Dow Jones Industrial Average is up 56 percent from the March lows.  A stunning rally only seen one other time in history and we would need to go back to the 1930s for that.  Yet at the same time, we have seen a collapse in the U.S. dollar.  That is why oil, even though demand is relatively the same, is now back near $80 a barrel.

The Federal Reserve can easily strengthen the U.S. dollar.  All they would need to do is increase interest rates to reign in liquidity.  Yet this would crush the debt consumption in housing and autos.  To show you the insidious way how the value of the currency is being washed away, take a look at the recent Dow rally in terms of Euros, a more stable currency: 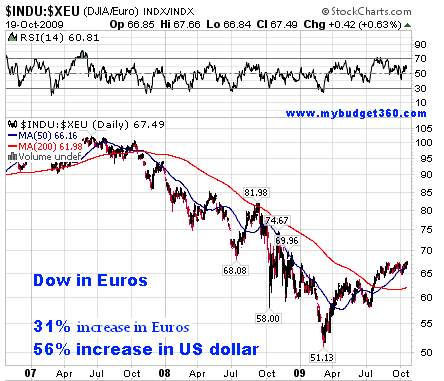 In U.S. dollar terms, the Dow is up 56 percent but when measured in Euros the rally only comes out to be 31 percent.  A strong rally no doubt but nothing close to the 56 percent.  We can also measure the Dow in relation to gold that can be used as another vehicle for storing wealth: 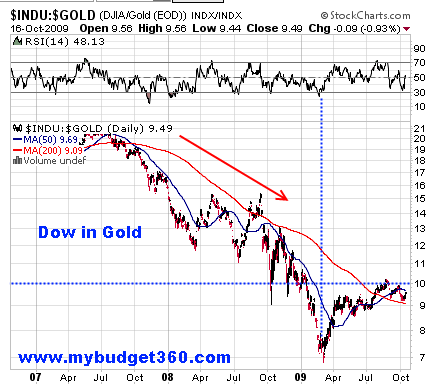 When we place the Dow in gold terms, there is no rally.  Just a slow decline.  Take this for example.  In 2000 gold hit a low of roughly $260 per ounce.  The Dow in January stood slightly higher than it does today at 10,900.  So if we take this as a measure:

Today the number is very different even though the Dow is virtually the same:

That is why there is a danger in believing the current stock rally is actually as positive as the raw number may indicate.  It is not.  The U.S. dollar since 2000 has fallen by approximately 38 percent.  The Fed and U.S. Treasury have been slowly robbing the buying power of each American dollar for nearly 3 decades.   That is why even though the median income has not moved for nearly a decade, buying power has collapsed.  These are methods of making Americans poorer in more hidden ways that politically work in favor of the banking elite.

The median household income for the average American is approximately $50,000.  Just imagine if the U.S. Treasury and Fed didn’t have these mechanism in place.  Do you think Americans would be furious that their median income would now be $31,250 after a decade?  Of course.  Yet most look at their income and see it moving sideways yet they are really earning less because they are being paid in a weaker currency.

Just think of everything that has gone up in value over the past decade:

The list goes on and on.  Yet pay has stayed in place.  Some of these sectors are correcting like housing.  Yet even after the housing crash, in many areas homes are still too expensive given local area incomes.  The Dow has rallied but what has really fueled the rally is the boom in the financial sector from the March lows:

While the S&P 500 is now up a stunning 62 percent from the bottom, the KBW bank share index (black line) is up over 160 percent.  The reason for this is the government has largely subsidized the banking sector on the backs of the American public.  Nearly 27 million are unemployed or underemployed yet we have spent trillions for what?  The above rallies will tell you for what.

The bailouts come at a cost.  A low Fed rate hurts the dollar.  Which in turn hurts the American consumer since we are not designed as an export economy.  This can change but it will take years.  Our economy is designed to consume and we have done too much of this.  Oil is now back up reflecting our weaker dollar: 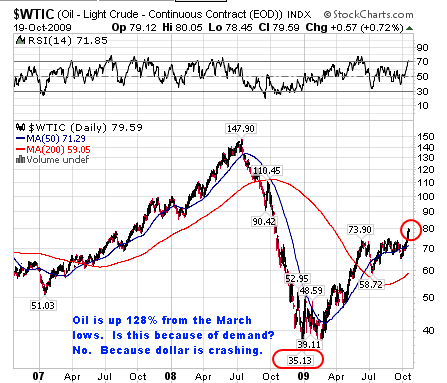 Oil is now up 128% from the lows reached in March.  Is this because there is a surge in demand?  Not really: 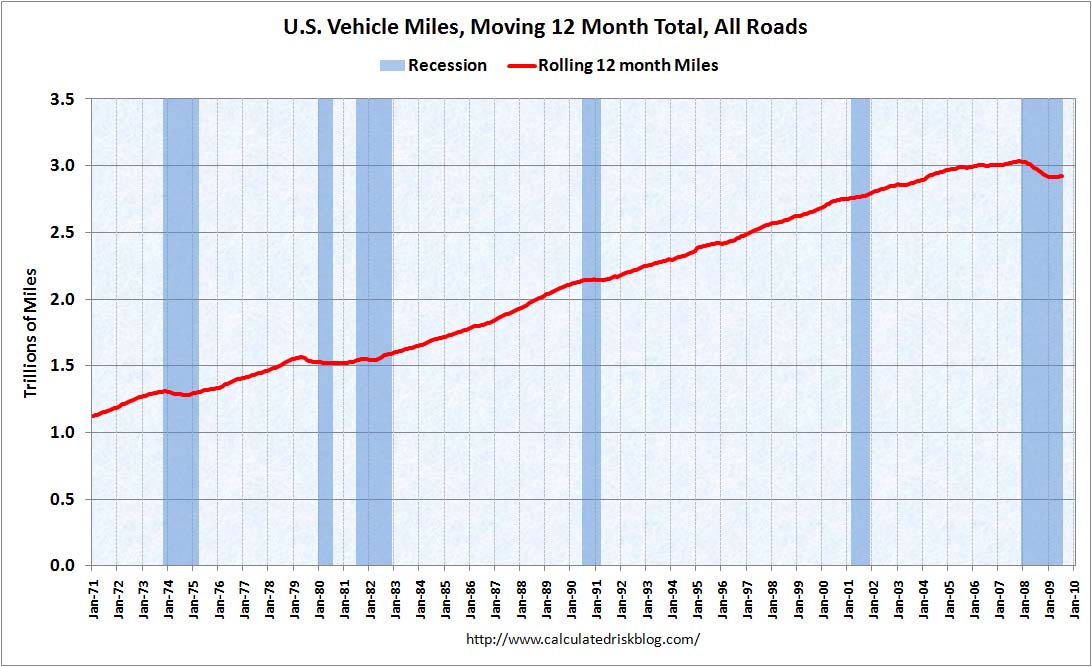 This has more to do with the decline in the U.S. dollar.  This in turn means Americans are going to spend more money on energy with their weaker dollars.  Don’t be fooled that a declining dollar is somehow good for the economy.  It helps in certain areas but isn’t a panacea like some policy makers would like to believe.

Currently we are facing dis-inflation from a decade long glut.  But once things stabilize, we can expect that our U.S. dollars are going to buy a lot less than we once thought.  The above charts point to a slowly declining standard of living if we don’t change our policies and our way of life.  Spending beyond our means does have long-term repercussions.