NDAA provision could be a one way ticket to Gitmo for reporters, claims class action lawsuit

Journalist Chris Hedges has filed a class action lawsuit against President Barack Obama over his signing of the National Defense Authorization Act, claiming that the ‘indefinite detention’ provision of the bill could see him sent to Guantanamo Bay simply for doing his job. 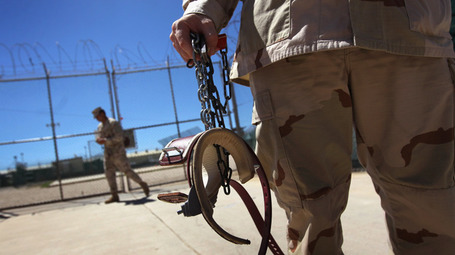 The controversial legislation, signed into law by Obama on New Years Eve, allows American citizens to be abducted and held in a detention camp anywhere in the world without trial under section 1031.

“Plaintiff Christopher Hedges is a journalist whose profession requires, in part: 1) that he have communication with and personal and direct intercourse with persons who are likely to be deemed engaged in hostilities with the United States under the AUMF [Authorization for Use of Military Force, Public Law 107-40] and the Homeland Battlefield Bill; 2) that he travel to see and meet with such persons; 3) that he report on the activities and beliefs of such persons; and 4) through his journalistic endeavors to convey their philosophy and belief systems to the public at large,” states the complaint.

Hedges points to an article he wrote which seeks to understand why Muslims are turning to radical Islamists such as the Palestinian Hamas and the Shiite Hezbollah as an example of how he could be accused of supporting parties who are engaged in hostilities against the United States, characterized as a terrorist sympathizer, and carted off to a detention camp.

Hedges is demanding the law be declared null and void because it directly violates the 1st and 5th Amendments to the US Constitution, and constitutional rights on access to civilian courts. Hedges’ case will be heard by Obama appointee U.S. District Judge Katherine B. Forrest and he is being represented by Princeton, N.J.-based attorneys Carl J. Mayer and Bruce I. Afran.

Although President Obama indicated in a signing statement attached to the bill that he would not use it to indefinitely detain American citizens without trial, it was the Obama administration itself which requested that the provision be worded so it would apply to US citizens.

As the bill’s co-sponsor Senator Carl Levin said during a speech on the floor last month, it was the Obama administration that demanded the removal of language that would have precluded Americans from being subject to indefinite detention.

“I spent many years in countries where the military had the power to arrest and detain citizens without charge,” Hedges wrote in an article published yesterday. “I have been in some of these jails. I have friends and colleagues who have ‘disappeared’ into military gulags. I know the consequences of granting sweeping and unrestricted policing power to the armed forces of any nation. And while my battle may be quixotic, it is one that has to be fought if we are to have any hope of pulling this country back from corporate fascism.”

The subject of the National Defense Authorization Act cropped up during last night’s Republican debate in South Carolina. Despite admitting he was not up to speed on the law, GOP frontrunner Mitt Romney said he would have signed the bill.