“This is not security — it’s obedience training for the American public so we will give up our rights like blinking sheep.”

A journalist who was threatened with arrest by the TSA merely for asking for the names of an agent and supervisor at JFK airport, and was then publicly denounced on the TSA’s blog, has hit back with a scathing response.

As we have reported this week, talk radio host and syndicated columnist Amy Alkon related the run-in she had with the TSA recently, saying she had her genitals inappropriately touched after opting out of a body scan. When Alkon asked to submit a formal complaint, a TSA supervisor refused to cooperate, refused to identify himself, and threatened the journalist with arrest.

In response to Alkon’s written account of what happened, TSA employee Bob Burns posted a piece on the offiical TSA blog, calling Alkon’s comments “offensive” and publicly smearing the journalist as “somebody who makes a living by agitating situations and writing about them.” Burns also suggested “I can assure you of one thing, an infinitesimal number of our employees know of Ms. Alkon.”

Now, Alkon has responded to the attack with a scathingly elegant post defending her right to opt of TSA security theater and exercise her constitutional rights. Alkon denounces the TSA as “odious” and “shameful” and urges “This is not security — it’s obedience training for the American public so we will give up our rights like blinking sheep.”

See below for Alkon’s full response to the TSA.

As part of the national Opt Out and Film week, we are urging all travelers to opt out of the body scanner and film their experience. Please email us your videos and stories.

Bob Burns, the blogging quisling who earns his living (as Blogger Bob) supporting the violation of our right to not be searched without probable cause, left a comment on my post “How Orwellian Are We? TSA Supe Roger Grant Refused To Give Me Name Of TSA Worker Who Groped Me At JFK”:

Here we go again… TSA seems to be a frequent and a convenient subject on this blog. The writer’s language characterization towards TSA and our employees is offensive to say the least. Name calling, insults, the whole gamut…In her latest screening incident, she’s angry because a supervisor wouldn’t give her the name of an officer who had just screened her. An officer who – by the way – by all accounts other than Ms. Alkon’s, did her job by the book. It is more likely that she wanted this information so she could post the officer’s name on her blog as she’s done before with other incidents. In fact, she named and publicly accused one of our officers of rape after a routine pat-down in an earlier allegation.

Ms. Alkon says all sorts of things in this post, but what Ms. Alkon doesn’t tell you is that from the moment she entered our checkpoint, she began making statements such as “TSA gets paid to molest passengers and touch their private areas.” Does that sound like somebody who wants to get through the checkpoint smoothly? No, it sounds like somebody who makes a living by agitating situations and writing about them.

Also missing in the details, Ms. Alkon wasn’t selected for a pat-down as she states in this post. She opted out of advanced imaging technology (body scanner). It’s acceptable to opt out, but the standard protocol when a passenger opts out is that they receive a pat-down, not a free pass through security. If you read Amy’s comments, she knows this. As Ms. Alkon continued to make a scene, the checkpoint supervisor stated he would have to call airport police if she did not cooperate with the screening process.

We understand that not everybody likes or agrees with TSA’s policies and procedures. Part of what makes this country great is that we can openly complain on blogs such as this one, but I think it’s only fair that the blogger in question should be fair and accurate about what they write about and also consider the privacy of the individuals involved. After all, these individuals are doing the job the way they’ve been trained to do it. They show up to work daily with the intent of protecting our Nation’s transportation network.

I can assure you of one thing, an infinitesimal number of our employees know of Ms. Alkon. I can also assure you that reoccurring allegations like hers seem to be more self perpetuated rather than based upon reality and do nothing but detract from the mission at hand.

“TSA gets paid to molest passengers and touch their private areas.” Does that sound like somebody who wants to get through the checkpoint smoothly?No, it sounds like someone who wants to defend our constitutional rights.

You, Bob Burns, are terrible person. You take money in order to support the violation of our rights. Being a prostitute would be a far more noble profession. In that case, consenting adults remove their clothes in a consenting exchange.

Tell me why in the world there is a reason to search me?

I NEVER make the metal detector buzz, but often I don’t even get to go through it.

And yes, I was selected for a SEARCH. I am selected just about every time I fly. Random? I doubt it. The fact that I choose not to go through scanners — scanners that professors at UC have written papers about the dubious safety of — does not mean I opt for the grope-down.

Furthermore, the thugs taking money for violating our rights that work for the TSA do a little intimidation number on me every time that I forgot to mention in the post. They tell me that they “don’t have personnel” to watch my computer, iPad and other items that are out on the conveyer.

You are part of a framework that is not about catching terrorists — Thedala Magee, Tiffany Applewhite…Moore, whose name I was denied in the most Orwellian manner…a woman allowed to grope my body sans probable cause…are these people highly trained intelligence officers? No, they are not. They’re people who would be working other unskilled jobs if they weren’t hired to provide security theater at the airport.

Any single commenter here smart enough to make it in the debating fray on my blog could smuggle contraband onto a plane. No, not through the cartoon security Jonathan Corbett and others have shown is a joke. (There was a TSA tester in Dallas who smuggled a gun through FIVE times without any of the hamburger clerks you have manning security noticing.)

This is not security — it’s obedience training for the American public so we will give up our rights like blinking sheep. It is odious that you earn a living supporting it. The TSA has not caught a single terrorist, and in fact, is unnecessary, now that our cockpit doors are reinforced and that we know that there’s an Islamic game-changer: That terrorists are now willing and even eager to die.

There is no inaccuracy to what I write.

Furthermore, because I need to get on my flight, I cooperate with the thuggery at the airport — the entirely unnecessary groping of my body when I’m probably recognized by the agents. (One woman at the Delta LAX terminal a few flights ago said so.) This is punitive, this groping of me and the groping of other Americans, and has nothing to do with finding terrorists.

And while you’re crowing about free speech, let’s note that Thedala Magee tried to yank $500,000 out of me for exercising mine. My lawyer, the wonderful Marc Randazza, showed that when somebody you do not want to have touching your body touches your sex parts in any other arena we call this rape. What do you call it?

You are helping people like Michael Chertoff get rich and you are helping erode our rights. You are doing an extremely shameful thing and I just wish you could not go to sleep nights for taking money for this, but it seems you have all the conscience of cement.

Where’s your comment on the post about Geoff McGann, the advertising creative guy who was JAILED for wearing a watch that didn’t look to the hamburger clerks manning “security” like it was bought at JC Penney?

Oh, and regarding this from Bob:

No, it sounds like somebody who makes a living by agitating situations and writing about them.

I don’t “make a living” from my blog. I earn a little money from ads and from when blog commenters buy stuff from my Amazon links. But, my living is earned as a syndicated newspaper columnist and author working on her third book which just sold at auction, meaning more than one company bid on it.

My blogging about the TSA — and my speaking up at the airport — is something I do for the same reason I blog about campus civil liberties defenders theFIRE.org and ask people to donate to them and to Institute for Justice: I am extremely grateful for the civil liberties we have and do my part to defend them.

You, Bob Burns, on the other hand, proudly take money to support the daily violation of Americans’ rights at airports, and in turn, the erosion of civil liberties in this country.

UPDATE: Bob Burns has posted on this on the TSA’s blog — using our tax dollars to attack me, free speech, and defend searches that are expensive “security theatre” — but the site won’t let me post my comment, cut down to be of acceptable word length for this blog. I’ve tried numerous times to get it to accept my comment. These were a few of the captchas I put through. None were accepted. 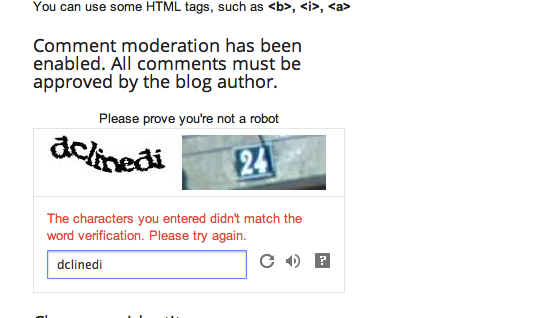 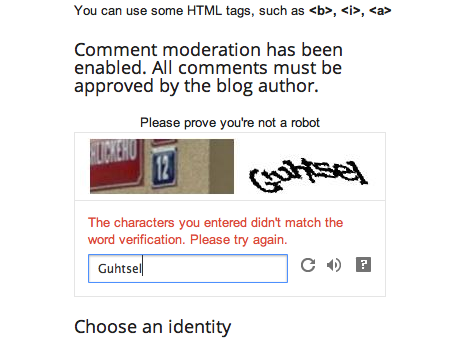 Somebody whose IP is accepted to post there please tell him that he needs to post this response. Not surprisingly, though perhaps coincidentally, there seems to be a stumbling block to free speech on the TSA’s blog.

Steve Watson is the London based writer and editor for Alex Jones’ Infowars.com, andPrisonplanet.com. He has a Masters Degree in International Relations from the School of Politics at The University of Nottingham in England.