The Trilateral Commission (TC) held its annual meeting April 21-22 at the Hotel Okura in the heart of the business district in downtown Tokyo. Some 400 were in attendance. 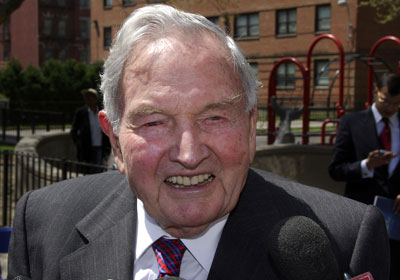 Over the course of the weekend gathering, the globalist group sought to advance its goal of world government, in spite of righteous populist anger directed at international banking elites for bringing about the collapse of economies around the world.

Founded in 1974, the TC was set up by international banker David Rockefeller to foster closer economic ties between Japan, Europe and North America. Since that time, many TC figures have served in high posts in American presidential administrations, both Democrat and Republican alike.

Although Ronald Reagan effectively condemned the internationalist worldview of the TC in his 1980 campaign for president, he actually welcomed the group to the White House during his presidency, perhaps no surprise since Reagan’s vice president, George H.W. Bush, was a founding TC member.

TC is essentially a junior affiliate of Bilderberg, the most exclusive and secretive club in the world, which was largely established under the auspices of the European-based Rothschild banking dynasty.

Waggish students of the two groups say while TC membership includes university professors, bankers and business executives, to be invited to the annual Bilderberg meetings on a regular basis, you have to own a multinational bank, a multinational corporation or a country.

While not widely publicized, Trilateral gatherings are generally more open, in contrast to Bilderberg, which meets in secret at luxurious resorts every year behind armed guards. This year U.S. Ambassador to Japan John V. Roos hosted a welcome reception forattendees at the U.S. Embassy Residence in Tokyo.

Among other things, this year’s series of talks focused on the upcoming presidential elections, upheavals in the Middle East and, of course, the ongoing global economic crisis. China’s growing power and influence in the region also figured prominently at the confab, as did the continuing controversy surrounding North Korea’s military ambitions.

Joseph S. Nye Jr.—longtime associate of the John F. Kennedy School of Government at Harvard and former U.S. Assistant Secretary of Defense for International Security Affairs—serves as chairman of what is called the “North American Group” inside the Trilateral Commission. 

“The focus of the talks this year largely revolved around catch phrases like “multipolarity,” “intertransparency” and “eco-connectedness”—words that imply global economic intertwining, which has long been the goal of globalist groups like the Trilateralists and Bilderberg. At the same time, concepts of state nationalism, individual sovereignty and protectionism were roundly eschewed by speakers.”

“Former U.S. ambassador to NATO Nicholas Burns told a Chicago gathering on March 28 that the 28-member, traditionally defensive military alliance is fast becoming “the first responder” of the world and seeks a bold eastward expansion to possibly absorb Japan, Australia, India and New Zealand, among others.”

“Longtime Australian official Kim Edward Beazley revealed more about NATO’s plans, as the alliance, created in 1949 to counter Soviet expansionism, morphs into a hair-trigger “top cop” for those constructing a world union under the broad planning of the Bilderberg group, in league with a host of world government consensus-builders, including the Chicago Council on Global Affairs and similar World Affairs Councils that reach down to the grassroots.” … “Beazley suggested that the Trans-Pacific Partnership (TPP), a “super-NAFTA” free-trade scam that these one-worlders want to foist on the Far East to bolster the pending Pacific Union, is a critical goal for global governance. Given the context in which he announced the perceived need for a TPP, it’s highly likely the TPP will be a specific topic, as part of NATO’s eastward expansionism, at the NATO summit itself.”