Desperate to sell another “humanitarian” invasion, the leftist media in the United Kingdom has resorted to inventing conspiracy theories about events in Syria as part of a campaign to depict President Bashar Assad’s government as genocidal, while completely failing to acknowledge that the country is in a state of civil war. 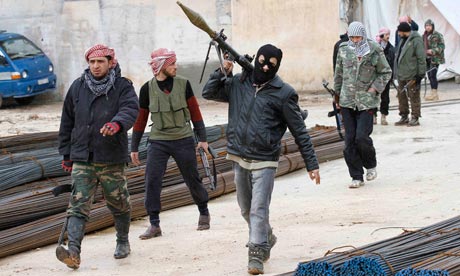 While the likes of the Guardian and other establishment leftist newspapers in Britain routinely savage anyone who dares to commit the thought crime of questioning the official story behind the 9/11 attacks or the London bombings, apparently it’s perfectly reasonable to continually imply that the wave of bombings and attacks targeting President Bashar Assad’s forces are false flags committed by the regime itself.

The UK Guardian, which has completely prostrated itself as a 24-hour rolling mouthpiece for opposition fighters it habitually describes as “activists,” is at it again today, reacting to news that explosions have killed 17 people in an attack carried out by opposition rebels which targeted Syrian military and security buildings in the northern city of Aleppo, by insinuating the Syrian government bombed its own facility.

They did the same thing when were 30 people killed by opposition rebels following two terrorist attacks in Damascus back in December.

The newspaper’s live coverage of events is little more than a platform for dubious ‘tweets’ sent out by anyone with a Twitter account claiming to be a Syrian activist, almost all of which claim with no evidence that Assad is killing his own forces to blame it on the opposition.

“Blow up people then broadcast the gory aftermath on morning TV. What an utterly disgusting regime,” reads one tweet featured by the Guardian.

“Two explosions rock Aleppo, obviously another Regime charade on the bodies of innocent civilians and some of its cronies,” writes another.

These baseless accusations could be coming from anywhere, whether they be from real Syrian “activists” or from within the halls of Britain’s Foreign Office. The Guardian simply regurgitates them alongside an editorial tone that affords the claims total credence, ignoring the independent observers from the Arab League who confirmed in their report that opposition fighters were using indiscriminate violence against government forces.

The plausibility of terrorists targeting the Syrian regime is perfectly viable given the fact that hundreds of Libyan rebels, commanded by Abdulhakim Belhadj, a committed jihadist who fought with the Taliban against U.S. troops in Afghanistan, were airlifted into Syria last November to aid the opposition in carrying out attacks against government forces.

British Special Forces are now also on the ground advising rebels. Why would Special Forces who are trained to kill be advising “activists,” as the Guardian describes them?

The Guardian was even called out by one of its own readers, who pointed out that the fighting is actually a two-sided affair, rendering claims that Assad is engaging in “genocide” totally inaccurate.

“The definition of genocide is: “the deliberate and systematic destruction, in whole or in part, of an ethnic, racial, religious, or national group”. Your writers, and the writers of many other publications, use it incorrectly all too often. What is happening in Syria is tragic, certainly could be called a crime against humanity, etc, but it is not genocide. It is civil war. Misusing genocide as frequently and mainstream journalists seem to love to do is inappropriate, unprofessional, and immoral in the sense that it is crying wolf and diminishing the severity of the word and the magnitude of the times genocide has actually occurred,” commented the reader.

No one denies that Assad’s forces are killing opposition fighters, what do you expect when NATO powers have flown in the same terrorists who helped them overthrow Gaddafi to aid Syrian rebels? But to portray the rebels as “activists” who are the victims of bloodthirsty repression, even as they carry out terror attacks killing innocent people and Syrian government personnel, is wholly dishonest.

Don’t forget that these are the same media outlets who for weeks persisted in describing Libyan rebel fighters who were armed with RPGs and were commandeering fighter jets as “demonstrators,” urging the UN to impose a “no fly zone” which quickly turned into a bombardment.

The “humanitarian” attack on Libya so yearned for by liberal interventionists, with NATO powers again throwing their weight behind Al-Qaeda-affiliated terrorists who had killed US and British troops in Iraq, has produced a country run by mobs of thugs who hunt, torture and kill dissenters, notably black Libyans who have been rounded up and incarcerated in detention camps.

Thanks in part to leftist cheerleaders of “humanitarian” war like the Guardian, the Al-Qaeda flag now flies proudly over Libya.

The Guardian is not alone in its efforts to portray Syrian rebel fighters as peace-loving angels while denouncing Assad’s government as an army of genocidal maniacs. The London Independent has got in on the act too, claiming that “Syrian President Assad’s security forces have indiscriminately killed scores of newborn babies in Homs this week,” writes Patrick Henningsen.

The claim, which evokes memories of the notorious Saddam Hussein incubator babies hoax, has absolutely no foundation in evidence and comes directly from inside Britain’s Foreign Office.

Despite there being no media access inside Syria whatsoever, the international corporate press has simply relayed propaganda from “activists,” who are regurgitating talking points handed to them by Britain and the US, while completely ignoring the Arab League’s report which affirmed that the media has greatly exaggerated the amount of violence taking place in Syria.