Former New York City Mayor Michael Bloomberg is preparing to enter the 2020 Democratic primary despite saying earlier this year he would not run for president, according to the NYT. The billionaire environmentalist has been privately weighing a bid for the White House for weeks and has not yet made a final decision on whether to run, an adviser said. But in the first sign that he is seriously moving toward a campaign, Bloomberg has dispatched staffers to Alabama to gather signatures to qualify for the primary there. Though Alabama does not hold an early primary, it has a Friday deadline for candidates to formally enter the race.

AP adds that Bloomberg opens the door to a presidential run because the field of Democratic candidates is “not well positioned” to defeat Trump. It is unclear how further splitting the vote, especially if he ends up getting more of the centrist vote, will not virtually assure a Trump landslide victory in 2020 but we’ll leave that to the DNC to manipulate. For now, however, in what is shaping up as the best trade of the day, a bet on Michael Bloomberg is up 366% on PredictIt on the day. 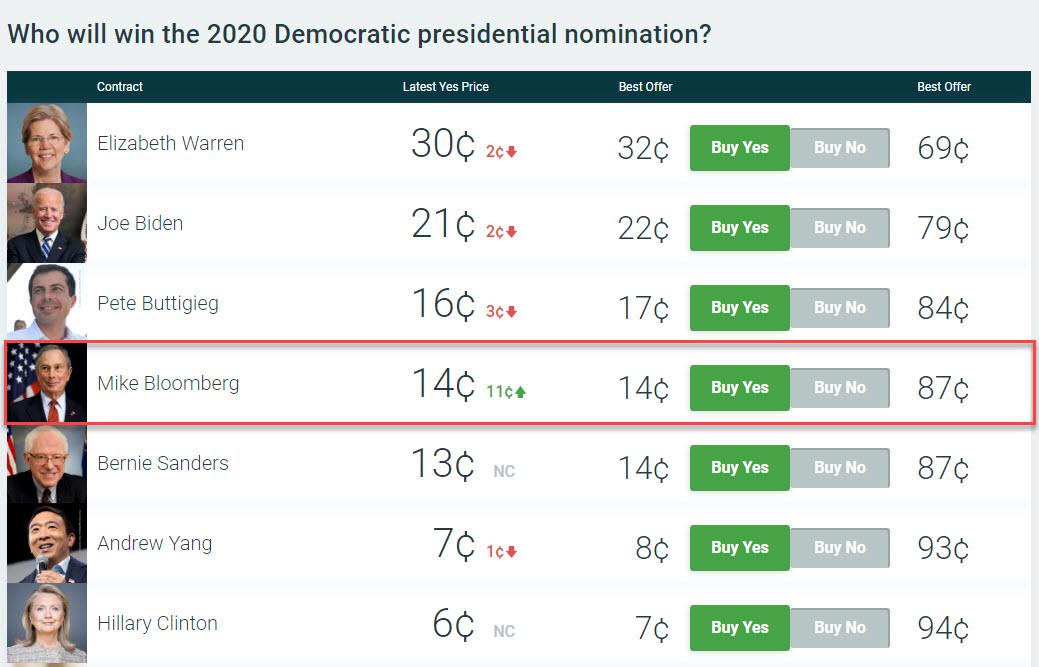 A Bloomberg adviser said the former mayor has been privately mulling a White House bid for weeks and has not yet made a final decision.

As the NYT reports, “should Mr. Bloomberg proceed with a campaign, it could represent a seismic disruption in the Democratic race.”With his immense personal wealth, centrist views and close ties to the political establishment, he would present a grave and instantaneous threat to former Vice President Joseph R. Biden Jr., who has been struggling to raise money and assemble a ideologically moderate coalition.

But Mr. Bloomberg could also reshape the race in other ways, intensifying the Democrats’ existing debates about economic inequality and corporate power, and offering fodder to the party’s rising populist wing, led by Senators Elizabeth Warren and Bernie Sanders, who contend that the extremely rich already wield far too much influence in politics. Mr. Bloomberg has repeatedly expressed discomfort with certain policies favored by both Ms. Warren and Mr. Sanders.

Howard Wolfson, a close adviser to Mr. Bloomberg, said on Thursday that the former mayor viewed President Trump as an “unprecedented threat to our nation,” and noted Mr. Bloomberg’s heavy spending in the 2018 midterm elections and this week’s off-year races in Virginia. Mr. Bloomberg, he said, has grown uneasy about the existing trajectory of the Democratic primary.

“We now need to finish the job and ensure that Trump is defeated — but Mike is increasingly concerned that the current field of candidates is not well positioned to do that,” Mr. Wolfson said. “If Mike runs he would offer a new choice to Democrats built on a unique record running America’s biggest city, building a business from scratch and taking on some of America’s toughest challenges as a high-impact philanthropist.”

A former Republican who repeatedly explored running for president as an independent, Bloomberg registered as a Democrat ahead of the midterm elections last year. In his past flirtations with the presidency, Bloomberg has never before taken the step of filing to put his name on a state ballot.

While Bloomberg could still opt against running, even his preliminary steps toward a campaign may come as a blow to Joe Biden, who has been counting on strong support from centrist Democrats, traditional party donors and much of the business community to carry him forward in the race.

Elizabeth Warren, for one, was quick to welcome Mayor Mike to the race:

Welcome to the race, @MikeBloomberg! If you're looking for policy plans that will make a huge difference for working people and which are very popular, start here: https://t.co/6UMSAf90NT

And while we await for the official documents to be filed, we wonder what Mike’s political platform will be: free Bloomberg terminals for everyone, or the slogan “Billionaires Trillionaires should not exist.”