REUTERS UPDATE: Secret Service confirms that police are shooting #g20 protesters with “bean bags.” But check out what they look like. Via Keepshooting.com: 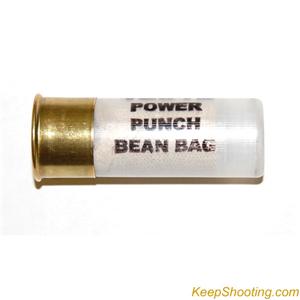 A 12 gauge round that direct fires a 26 gram or 40 gram bean bag projectile. Designed for single target engagement allowing escalation of force from a close distance prior to use of lethal means. It’s $9.95 per round.

A Effect on target: Incapacitation caused by loss of breath, psychological effect, and/or pain and extreme discomfort.
B. Time to Effect: Instantaneous
C. Duration of Effect: Seconds to Minutes based on power factor, distance and location of strike.
D. Effective Range: 7 yards (heavily clothed subject) to 20 yards

National Guard, police, and other military units attacked American citizens with tear gas and deployed sound cannons today in response to an “unpermitted protest” as bedlam hit the streets on the first day of the G20 summit in downtown Pittsburgh.

The First Amendment is officially dead in the United States. If this isn’t martial law then we don’t know what is. Associated Press photographs show National Guard troops in full fatigues with active duty military running checkpoints that make the roadblocks in Iraq positively friendly. Like Iraq, America is now a conquered nation occupied by troops whose primary function is to oppress anyone who tries to express the freedoms that they once enjoyed.

It all unfolded live on The Alex Jones Show as the Infowars crew called in to the program as sound cannons were turned against protesters who police were attempting to force out of the immediate area.

“According to news agency reports, officers made their announcement over a loudspeaker telling people to leave or face arrest or “other police action,” reports the London Times. These words were broadcast live on the Alex Jones Show today along with police orders that the “unlawful assemblies should immediately disperse”.

“Protesters at one flashpoint reported the use of tear gas to disperse the crowds,” reports the Press Association.

Citing Pittsburgh criminal code, police bellowed through loudspeakers that unpermitted protests were a serious offense, an official death knell for the First Amendment.

Corporate media reports will obsess about anarchists causing nuisance without mentioning the fact that the You Tube video below clearly shows police terrorizing neighborhoods with ear-splitting sound weapons that are clearly a violation of all kinds of town ordinances related to public health and noise pollution.

Infowars correspondents reported live how police were “kettling” protesters into confined areas in an attempt to subdue them. Jason Bermas reported seeing mask wearing anarchists, who have been caught before on numerous occasions provoking violence as a pretext for the police to crackdown, throwing objects and tipping over garbage cans.

As we have previously reported, 2,500 National Guardsmen along with Marines and the Air Force are stationed in Pittsburgh to provide “security” for the G20 summit. Their primary training routine revolved around “crowd control” and dealing with civil unrest. The sight of troops on the streets of America, even for routine traffic control and “security” is now commonplace as the land of the free sinks into a militarized police state.

Watch this space for more coverage from Pittsburgh over the next few days. Images and videos appear below.

LRADS being used against protesters caught live on The Alex Jones Show.

Numerous videos of G20 protests and police actions can be viewed on You Tube as they roll in here.

Demonstrators run from pepper gas released by police during a protest prior to the start of the G20 Pittsburgh Summit in Pittsburgh, Pennsylvania September 24, 2009.

A demonstrator sprays water over the face of another demonstrator after police released pepper gas during a protest prior to the start of the G20 Pittsburgh Summit in Pittsburgh, Pennsylvania September 24, 2009.

A demonstrator kicks a pepper gas canister thrown by police during a protest before the start of the G20 Pittsburgh Summit in Pittsburgh, Pennsylvania September 24, 2009.

A police officer tries to block a street during a protest before the start of the G20 Pittsburgh Summit in Pittsburgh, Pennsylvania September 24, 2009.

National Guard troops man a checkpoint into downtown Pittsburgh, Pennsylvania, near the site of the G20 summit. World economic leaders arrive in the city later today for 2 days of meetings. Thousands of police deployed behind steel barriers here Thursday to protect a summit of 20 world leaders, as streets were closed and shop windows boarded up in case of violent protests.

National Guard troops man a checkpoint into downtown Pittsburgh, Pennsylvania, near the site of the G20 summit. Thousands of police deployed behind steel barriers here Thursday to protect a summit of 20 world leaders, as streets were closed and shop windows boarded up in case of violent protests.

A car and driver are screened at a checkpoint by security personnel in downtown Pittsburgh, Thursday Sept. 24, 2009. World leaders are expected in Pittsburgh Thursday for the start of the two-day G20 summit.

An unidentified man holds an American flag upside, near a military checkpoint in downtown Pittsburgh, Thursday Sept. 24, 2009. World leaders are expected to begin a two-day G20 summit in Pittsburgh on Thursday.