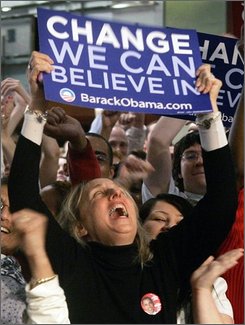 George Soros-funded Obama campaign front group MoveOn.org is actively attempting to hijack the growing Occupy Wall Street movement in a bid to push the Obama administration’s tax agenda, and is now clearly trying to steer the narrative of the protests to ostracize End the Fed advocates and anyone opposing tax hikes for the middle class.

MoveOn.org is a lobbying organization that routinely backs Democratic candidates. The group aggressively supported Barack Obama’s 2008 election campaign and is now “Perhaps the lead lobby organization for his policies….apart from Obama’s own Organizing for America,” reports Source Watch. It received the largest “soft money” contribution in American history when George Soros donated $5 million dollars to the group in 2003.

The fact that Soros, a Wall Street billionaire criminally charged with insider trading, and MoveOn.org, a front group for the Wall Street-financed Obama administration, are now joining forces to voice their “support” for an anti-Wall Street movement, should set alarm bells ringing.

A posting on the MoveOn.org website today represents a brazen bid to drown out a minority of voices amidst the ‘Occupy’ demonstrators who are trying to educate leftists that it is the Federal Reserve, and the ceaseless money printing policies given the green light by the Obama administration, the latest incarnation of which is Obama’s “Jobs Plan,” that represent the root cause of America’s economic decline.

The image shows a group of protesters demonstrating against income tax hikes for the middle class under the headline “Some Protests Make Absolute Sense. Then There Are The Others.” Added to the image is text that claims all of the public infrastructure shown in the photo was paid for with income tax funds.

“Taxes paid for their protest scenery. Let’s enjoy the irony,” states the text below.

Of course, the message conveyed by the image, that failing to increase income taxes would lead to further decay of America’s public infrastructure, is a complete falsehood. Roads, traffic lights, power cables, phone lines and traffic signs were all easily financed prior to 1913, before any form of income tax even existed, never mind when the rates were far lower.

The U.S. government’s own 1984 investigation found that “All individual income tax revenues are gone before one nickel is spent on the services which taxpayers expect from their government.”

In addition, the report noted how, “Any meaningful increases in taxes from personal income would have to come from lower and middle income families, as 90% of all personal taxable income is generated below the taxable income level of $35,000.”

This is precisely why Obama’s new tax plan, known colloquially as the “Buffett tax rule,” advocated by MoveOn.org and many of the ‘Occupy’ protesters, will do nothing to touch the super rich or Wall Street, and will instead merely further bankrupt the middle class.

A Wall Street Journal analysis of the “Buffett tax rule” documented how the plan would barely effect billionaires like Buffett, and instead would place the burden on middle class America.

“Roughly 90% of the tax filers who would pay more under Mr. Obama’s plan aren’t millionaires, and 99.99% aren’t billionaires,” pointed out the WSJ analysis.

It’s interesting to note that a pop up banner which appeared on MoveOn.org’s website which formerly read, “I stand with Warren Buffett” now states, “I stand with the Wall Street protesters.”

The Soros-funded outfit has clearly jumped on the ‘Occupy’ bandwagon in an attempt to co-opt the message and turn the hordes of young activists marching in the streets of New York, Washington and elsewhere into a Barack Obama re-election army.

It seems to be working – the website which has emerged as an official clearinghouse for OWS information earlier this week announced that it “stands in solidarity” with not only MoveOn.org, but also SEIU (Service Employees International Union), a group that spent $28 million dollars supporting Obama’s 2008 presidential campaign, making it the “organization that spent the most to help Barack Obama get elected president.” The website also publicized its support for AFL-CIO, which has also announced that it will likely back Wall Street puppet Obama in 2012.

Obama himself later followed up by expressing sympathy with the “frustrations” of ‘Occupy’ activists.

Occupy Wall Street demonstrators need to resist efforts by their emerging leadership to form an alliance a group that is nothing less than a campaign arm of the Wall Street-funded Obama administration.

MoveOn.org is a George Soros-bankrolled political lobby that cares only about resurrecting the election hopes of Barack Obama, a motivation shared with the very Wall Street entities that are once again behind his campaign in 2012.