NSIDC Reports That Antarctica is Cooling and Sea Ice is Increasing

Last month we discussed how NASA continues to spread worries about the Antarctic warming and melting.

“has been losing more than a hundred cubic kilometers (24 cubic miles) of ice each year since 2002” and that “if all of this ice melted, it would raise global sea level by about 60 meter (197 feet).“

[Note that is continental ice, not sea ice, – Anthony]

But NSIDC seems to be thinking differently in their March 3, 2010 newsletter.  They say Antarctica is cooling and sea ice is increasing (makes sense – ice is associated with cold.)

Sea ice extent in the Antarctic has been unusually high in recent years, both in summer and winter. Overall, the Antarctic is showing small positive trends in total extent. For example, the trend in February extent is now +3.1% per decade. However, the Amundsen and Bellingshausen Seas show a strong negative trend in extent. These overall positive trends may seem counterintuitive in light of what is happening in the Arctic. Our Frequently Asked Questions section briefly explains the general differences between the two polar environments. A recent report (Turner, et. al., 2009) suggests that the ozone hole has resulted in changes in atmospheric circulation leading to cooling and increasing sea ice extents over much of the Antarctic region.

The NSIDC graph below shows the upwards trend in Antarctic Sea Ice.  Some recent years have shown anomalies as high as +30%. 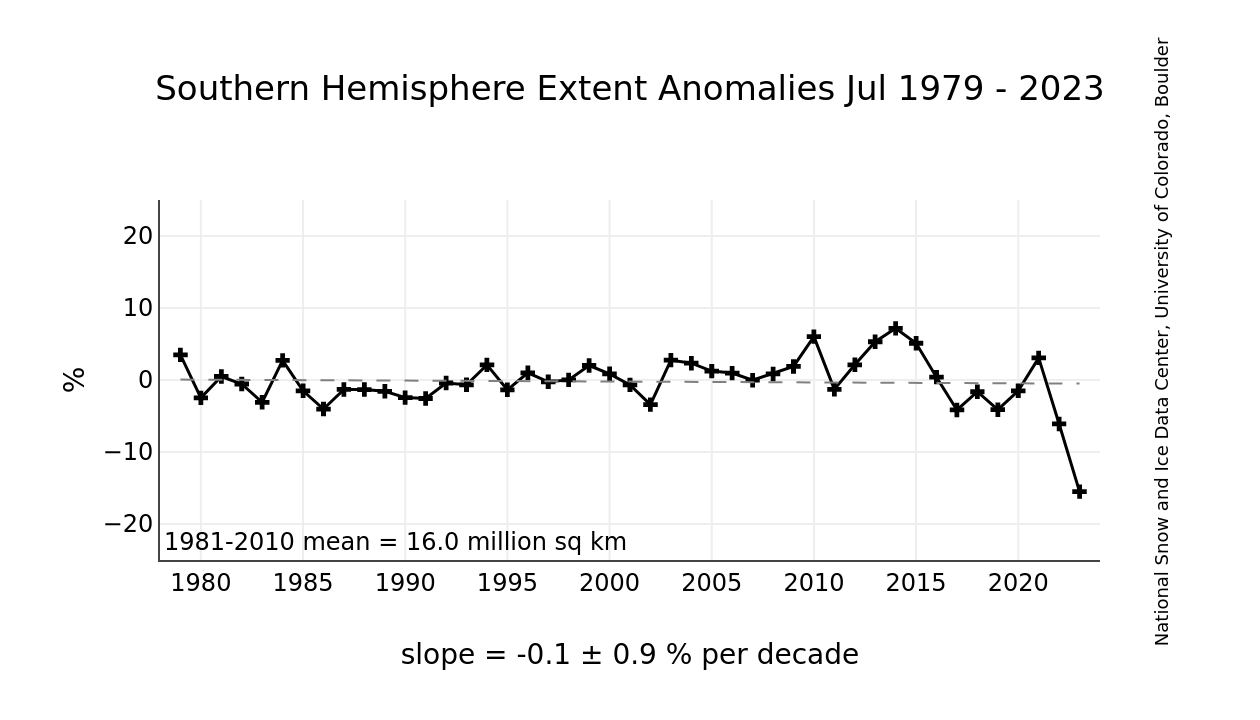 UAH satellite data also shows Antarctica cooling, as seen in their map below.  (This map is dated November, 2006 – if anyone knows where to get a more recent version, please let me know.)

Perhaps NASA should have stuck with their original 2004 map below, showing Antarctica’s interior cooling?

While there’s no dispute that there’s some sea ice loss in the Antarctic peninsula, all signs seem to point in the opposite direction of what some what have you believe about Antarctica as a continent.