Obama: The number of refugees from Syria and elsewhere will be increased ‘to 100,000 per year’

The number “10,000 Syrian refugees” is being thrown around a lot by the mainstream media, but did you know that Barack Obama has actually publicly declared that the U.S. is going to take in 100,000 refugees from Syria and elsewhere for each of the next two years?

That is an absolutely massive number, and it is inevitable that some jihadists will slip through the vetting process.  As Syrian refugees enter the United States, they are being dispersed all around the country.  In my article yesterday, I explained that the State Department has established refugee processing centers in 48 U.S. states.  But instead of the “trickle” of refugees the mainstream media is talking about, the truth is that it is going to be more like a flood.  The following is a message that was tweeted by Barack Obama’s official Twitter account on September 28th… 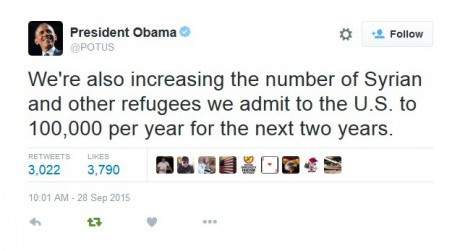 The Obama administration will increase the number of worldwide refugees the United States accepts each year to 100,000 by 2017, a significant increase over the current annual cap of 70,000, Secretary of State John Kerry said Sunday.

“This step that I am announcing today, I believe, is in keeping with the best tradition of America as a land of second chances and a beacon of hope,” Mr. Kerry said, adding that it “will be accompanied by additional financial contributions” for the relief effort.

So there you have it.

And in particular, the Obama administration has been looking for ways to “accelerate” the number of refugees coming in from Syria.  The following comes from the CBC…

The Obama administration is moving to increase and accelerate the number of Syrian refugees who might be admitted into the United States by opening new screening outposts in Iraq and Lebanon, administration officials told Reuters on Friday.

“We want to be in a place where we can push out really ambitious goals,” said one of the officials, who spoke to Reuters on the condition of anonymity.

The State Department runs nine screening centres worldwide that serve as meeting points for refugees and U.S. Department of Homeland Security employees who have to decide who is suitable for resettlement in the United States.

You would think that what just happened in France would cause Obama and his minions to reassess this strategy.

But instead, they appear to be doubling down.  In fact, at the G20 summit Obama lectured his fellow world leaders on the need to take in more Syrian refugees.

Obama would have us believe that all of the refugees are highly “vetted” and that there is little danger of any terrorists being imported into this country as refugees.

But how exactly does that work?

Does he have the refugees fill out application forms?

Does he check their references?

Does he ask them if they ever worked for ISIS?

If terrorists want to come over here under the refugee program, of course they are going to lie.

In the end, it is up to whoever is doing the vetting to make a gut call.  And considering how politically correct many of them probably are, that probably is not going to work out too well.

Needless to say, Obama’s approach has drawn a tremendous backlash from some Republican leaders…

Some GOP leaders, including presidential candidates Jeb Bush and Sen. Ted Cruz, have said that only Christian refugees should receive any U.S. assistance. And Donald Trump told CNBC on Monday that letting them in “would be one of the great Trojan horses.”

At the G-20 meeting in Turkey, Obama said: “When I hear folks say that we should just admit the Christians but not the Muslims, when I hear political leaders suggesting there will be a religious test for which a person fleeing from a war-torn country is admitted … that’s shameful. That’s not American.”

And as I write this article, 13 Republican governors have announced that they will not accept any more refugees from Syria in their states.  The following comes from USA Today…

At least 13 governors say they will not accept Syrian refugees in their states in response to Friday’s attacks in Paris.

Without a doubt, this is a difficult issue.  There are thousands upon thousands of Syrians that are legitimately fleeing the horrible civil war in their nation, and those people do legitimately need help.

But how do we balance that with the safety of our own people?  It has been reported that at least two of the attackers in Paris came into Europe as “refugees”, and ISIS has just released a new video pledging to attack Washington D.C. as well…

The message to countries involved in what it called the “crusader campaign” was delivered by a man dressed in fatigues and a turban, and identified in subtitles as Al Ghareeb the Algerian.

“We say to the states that take part in the crusader campaign that, by God, you will have a day, God willing, like France’s and by God, as we struck France in the center of its abode in Paris, then we swear that we will strike America at its center in Washington,” the man said.

The success of the attacks in Paris is only going to embolden groups like ISIS to conduct even more attacks.  Radical Islamic terrorists want to create fear and they want to get attention, and what just happened in France definitely succeeded on both counts.  I believe that we are entering a time when terror attacks are going to become much more frequent and much more deadly, and as a result all of our lives are going to dramatically change.

In the future, we are all going to think twice before attending large public gatherings.  Once we witness a few more attacks like we just saw in France, people are going to become much more hesitant to go to places that they perceive could be targeted.

So is there a solution?  Please feel free to share what you think should be done by posting a comment below…