Poll: Majority Of Brits (Including A Third Of Remainers) Want Brexit Vote Respected

By ratio of 2:1, voters think it’s ‘fundamentally undemocratic’ for some MPs to try and prevent Brexit

A new survey conducted by research experts ComRes, finds that the majority of British people want the Brexit vote to be respected and want the country to leave the EU without any more delays.

Despite calls for delaying and even canceling Brexit from both members of the Labour Party and the entirety of the Liberal Democrat party, the survey finds that a majority of British people categorically do not want that to happen. 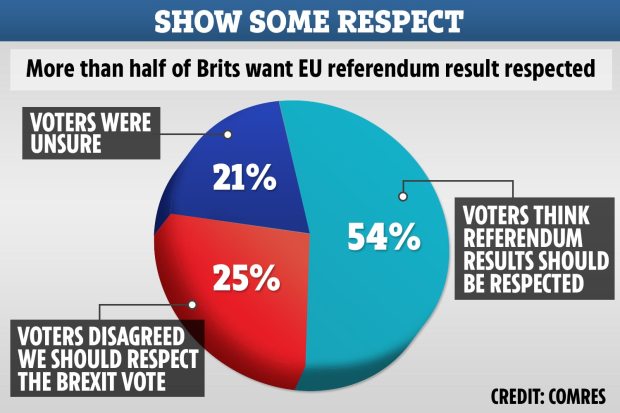 More than half of British adults, 54 percent, believe the result of the 2016 referendum should be respected, and Brexit delivered, the poll found.

Only 25 percent disagreed, and 21 percent said they didn’t know.

New @ComRes poll for @Telegraph out tonight: 54% support Boris Brexit pledge, including 35% of 2016 Remainers who say the #EURef result 'should be respected'

Even among those who voted Remain in 2016, more than a third, 35 per cent, said they now wanted Brexit delivered.

Only 29 per cent of voters said they want the process further delayed in the hope of securing a deal with the EU. 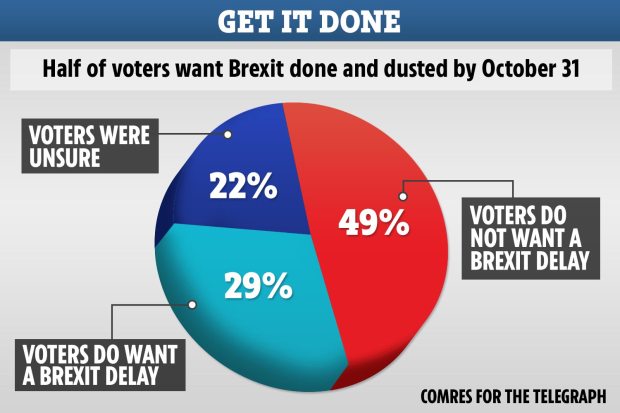 The survey noted that By ratio of 2:1, voters think it’s ‘fundamentally undemocratic’ for some MPs to try and prevent Brexit.

By ratio of 2:1, voters think it's 'fundamentally undemocratic' for some MPs to try and prevent Brexit given that Govt promised before #EURef to implement the result' (50% to 26%, 24% DK), incl 29% of Remain voters @ComRes for @Telegraph

If Brexit were to be revoked, it is clear from these figures that there would be a massive uprising.

The argument that the 2016 EURef result shd be respected gets almost universal support among BXP voters (97%), plus massive support from Leavers (87%) and Con voters (85%) @ComRes for @Telegraph. Pretty clear that these folk wouldn't take revoking A50 very well…

The poll also found that almost half of British voters would rather leave the EU with No Deal than have Corbyn as Prime Minister. Only 22 percent thought this was a good idea.

The survey also found that more voters agreed than disagreed that Boris Johnson should make a pact with the Brexit Party.

Here are some more findings from the survey:

STOP THE PAIN – almost half (48%) 'don't care whether or not, or how, the UK leaves the UK, I just want the uncertainty to be over' @ComRes for @Telegraph

Massive party divide over Corbyn's blocking of Boris's request for a GE – 79% of Tory voters and 88% of BXP voters support blocking it, compared to 11% of Lab and 21% of LD voters @ComRes for @Telegraph