Popular Music Is The Babylon System

Dumbed-down, amoral, nihilistic drivel from the likes of Gaga and Katy Perry serves to keep the masses in a state of spiritual decay

It has never been more apparent to those who have awakened from the slumber imposed upon them by popular culture that the establishment music industry now pumps out the most dumbed-down, monotonous, garbage which actually serves to induce depression and despair in those who are enlightened and aware, while providing hypnotizing bread and circuses for those still transfixed by the babylon system.

If the readers of this website sat down and watched MTV for an hour, they’d probably come away feeling dazed, confused, and disgusted at the parade of sickness, idolatry and worship of everything that’s wrong in our society. Love of money, the evisceration of morality, the exaltation of post-modern nihilism, the attack on the family, the normalization of the bizarre, the sick and the twisted.

Mainstream popular culture is nothing more than a tool which the elite use to make us feel worthless, pathetic, powerless and hopeless. They want us to believe that the most significant thing we can ever achieve in life is to look cool and garner the approval of our peers by wearing the uniform of whatever cult we are mandated to belong to, and that we can only accomplish this by mimicking the retarded behavior of the people we see in music videos. This is why legions of young people, whatever color they are or background they come from, walk around trying to look like and imitate rappers who wear their pants half way down their legs, can barely talk, and only live for getting smashed out of their skulls and having meaningless random sex with women who they objectify as instruments of carnal pleasure.

Easily the biggest stumbling block in trying to educate people as to why they are depressed, leading increasingly insular and emotionally unstable, unhealthy lives with declining living standards is dragging them away from the very distractions that contribute to their downfall.

The power of entertainment as an opiate of the masses has never been stronger, and with the widespread rollout of 3D technology, the tools of hypnotism are only becoming more and more potent.

A London Guardian report entitled “Lady Gaga and the New World Order” gives serious credence to a website that not only discusses how popular music is used to keep people downtrodden and distracted, but how it is replete with messages and symbolism bragging about how the elite are using entertainment to keep the masses enslaved.

The Vigilant Citizen has a good claim to be the world’s most distinctive music critic. On his website, vigilantcitizen.com, he describes himself as a graduate in communications and politics and a producer for “some fairly well-known ‘urban’ artists”. He has spent five years researching “Theosophy, Freemasonry, Rosicrucianism, the Bavarian Illuminati and Western Occultism”. All of these interests converge in his insanely detailed analyses of the symbolism of pop videos and lyrics. Thus Pink’s MTV awards performance mimics a Masonic initiation; Jay-Z’s Run This Town trumpets the coming of the New World Order (NWO); and the video for Black Eyed Peas’ Imma Be Rocking That Body advances “the transhumanist and police state agenda”.

What’s surprising is the methodical, matter-of-fact, occasionally humorous tone of his essays. He does not write like a swivel-eyed loon rambling about Obamunism (although, inevitably, there’s an unsavoury fascination with Jewish influence). To those who don’t study occult symbolism, he concedes, it might all seem “totally far-fetched and ridiculous”, but for those in the know “I was simply stating the obvious”. His examinations are certainly exhaustive. Scrolling down his densely illustrated posts, you may find yourself thinking, “Say, Lady Gaga really does very often cover up one eye. And a lot of pop stars really do pretend to be robots.”

Although the Vigilant Citizen insists he is neither a political conservative nor a religious fundamentalist, he is heir to such off-piste 60s pop critics as the Reverend David A Noebel, author of Communism, Hypnotism and the Beatles, and Gary Allen, who theorised that post-Rubber Soul Beatles material was so technically sophisticated that it must have been “put together by behavioural scientists in some think tank”. Leftwing thinkers at the time had their own take on pop as mind control. Peter Watkins’ 1967 movie Privilege starred Manfred Mann’s Paul Jones as a puppet of the state, pacifying the populace with catchy patriotic tunes. In such analysis, the villains may change but the mechanisms remain the same.

The fact that the Guardian writer seriously discusses how popular music is littered with elitist symbolism without sneering the whole thing off as a conspiranoid delusion is an example of how abundantly clear this process is becoming.

This kind of subject matter is no longer “out there,” it’s no longer considered wild to simply point out that popular culture and particularly popular music is exercising an undue and insidious influence on the moral, societal, and spiritual development of younger generations and humanity in general.

Nowhere was it more obvious than during a recent Beyonce performance where she was surrounded by dancing riot cops. As the vigilant citizen website explains, this is about indoctrinating people to accept “the “robotization” of the human body and the gradual introduction of a virtual police state”.

In other essays, Gaga’s habit of covering one eye is explained as her rejection of God and her induction as a Luciferian priestess. The one-eyed Luciferian theme is also seen here with Rihanna. 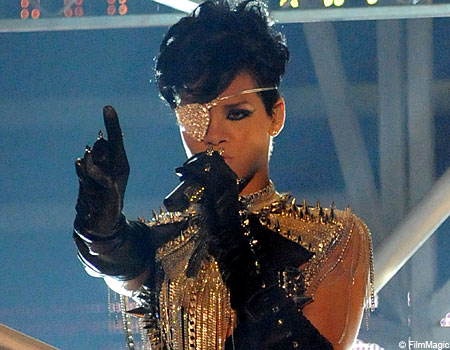 While the website sometimes uses too broad a brush with which to identify servants of the babylon system, for example, a Bob Dylan clip is misconstrued as him saying he sold his sold to the devil, when in fact as any Dylan fan will know, in the late 70’s he became a Christian and started releasing gospel music, it does an excellent job in pointing the finger at those who really have metaphorically sold their souls – people like Katy Perry – to be used as tools with which to keep the masses in a perpetual state of disorder and spiritual decay.

Tearing down the facade of this babylon system and dragging people away from the constant hypnotic distractions of sports, dumbed-down music, fashion and every other sideshow offered up to turn our heads from our true spiritual development is as if not more important than educating people about the political aspects of the new world order agenda.

We need to make it “cool” to be informed about what is happening to our world and how we can change its course. This process has accelerated over the past decade and many music artists have incorporated this awakening into their work. Bands like Muse and the Foo Fighters, rappers like Paris and Eminem, are pushing back against the tide of zombie brainwashing being fostered on us by the likes of Gaga and Katy Perry.

There’s no better way to conclude than with Bob Marley’s “Babylon System” song, which perfectly illustrates everything we are up against in this battle.