The company that rented out the 3D printer that was to be used in the testing and design phase of a group’s revolutionary gun manufacturing concept took their equipment back last week, however, a persistent Cody Wilson explains he and his organization aren’t deterred in their efforts to bring the idea to fruition. Their idea is nothing short of a slap in the face to gun legislation everywhere: an open-source site where gun enthusiasts from around the world convene to share and download gun design blueprints and files.

When Stratasys Inc, the 3D printer manufacturing company that leased the printer, caught wind of what Cody Wilson and his organization Defense Distributed were planning to use their printer for, they issued an email last week stating they would need to confiscate their printer prior to it even being used.

“They came for it straight up…I didn’t even have it out of the box,” Wilson told Wired’s Danger Room.

Wilson, a 2nd year University of Texas law student, and his group raised $20,000 last month to fund an operation known as the Wiki Weapon Project. The project’s goal was to produce a firearm solely using a 3D printer to manufacture all parts. Once the plans are tested and finalized, the group would then upload the files to the Internet for literally anyone to download, print and ultimately assemble.

The email was addressed to Wilson himself and came on behalf of Stratasys’ Legal Counsel, stating:
“It is the policy of Stratasys not to knowingly allow its printers to be used for illegal purposes. Therefore, please be advised that your lease of the Stratasys uPrint SE is canceled at this time and Stratasys is making arrangements to pick up the printer.”

“The only protest I had, the only exchange back I had was, “Well, legal counsel, our opinion is if these weapons are title I weapons, we don’t need registration, we don’t need license, we don’t need anyone’s approval to do this. This is totally legal, this is America,” you know? Patriotism,” Wilson told Infowars.com. “That wasn’t good enough for them, and they emailed me back and they said “Look, we’re not gonna get into a legal debate about it. We want it back,” and so fine.”

Stratasys legal counsel may very well be in the wrong. As CNET’s Rick Brown explains, it matters what type of gun you’re planning to produce, and whether or not you’re planning on selling your services as a gunsmith or the manufactured weapons.

Since 3D printed firearms manufacture is still in its infancy, actually in its conception phase, it still falls into a sort of legal gray area, however, Wilson believes Stratasys has been disingenuous in their statements to other media. “So Stratasys is saying and suggesting to other people, “Well, they can follow the law like anyone else.” The suggestion is that we weren’t going to. They’re pretending and hiding behind the law, when really they just don’t want to associate with the project. That’s disingenuous and they mistreated us and fine, I’m not in some personal vendetta against them, it’s just…they’re pretending.”

Indeed, the idea that a company can overbearingly control what people do with their product is bordering on an old world manufacturer mentality in which industries would control what people did with their technologies to the point of managing channels of distribution and production. “No that’s not what this machine is. This machine’s about doing anything with the machine,” Wilson says.

The printer abduction was nothing to write home about. Wilson says Stratasys hired third party couriers to retrieve their equipment.

Previously, Defense Distributed ran into trouble when their first open donation site Indiegogo canceled their account and refunded all donations a mere 22 days after its open. Indiegogo sent Defense Distributed an email saying its funds had been frozen due to “unusual account activity,” and followed up with an explanation that it had violated Indiegogo’s terms of service, which don’t allow the sale of “ammunition, firearms, or certain firearm parts or accessories.”

Wilson contends he read the terms and doesn’t believe he violated them. “My reading of their terms is we didn’t give anyone the option to sell or buy firearms. The exchange was they give us money, we give them information. That’s the project. Not firearms, not ammunition.”

Ever the tenacious micro-entrepreneur, Wilson didn’t let the account cancellation thwart his group’s drive to succeed. They raised their $20,000 goal last month, circumventing Indiegogo by inserting Paypal and Bitcoin donation widgets on their original site.

Since Wilson kept running into dead ends, he figured he had nothing to lose by going to Austin’s Bureau of Alcohol, Tobacco, Firearms, and Explosives (ATF) branch to once and for all absolve himself of any criminal wrongdoing. “And they were more than happy to talk to me, but they said, “Actually, it’s interesting you came because we were looking for you” and that’s not something you want to hear,” laughed Wilson.

“The ATF involvement was mostly at my direction. A lot of people say, “Why go to them?” but at this point I can’t get any answers from our lawyers. I’m not getting anywhere in reading the law myself. Everything’s intentionally kinda vague and ambiguous. And the technology’s really kind of outpaced the regulations…And so began a sort of quasi-interrogation. They were writing things down and asking me who I was. I told them who I was and what the project was. And I explained 3D printing to them, and so it went from imposing to really friendly.”

Ultimately, Wilson took away he’d have to do something he’d been avoiding; turn his company into a legal entity and get licensed.

“We’re gonna have to do the license because that’s the world we live in, apparently. And I think that’s unfortunate and I think it’s silly. Maybe it’s not so silly because this is firearms we’re talking about. But look, this speaks to the attitude toward micro-entrepreneurs and the attitude towards ideas in general in this country. You can’t do anything without somebody’s permission. I believe that. You interested in the natural world? You want to do something with chemicals? People are gonna look at you like you’re suspect. Like you’re some kind of drug dealer. You can’t do anything of any consequence with any curiosity in this country without being weighed, measured, forced into some institution or system that ties to register everything. I’ll be in every database from now until the end of time because I was simply curious.”

Wilson adds, “I want to be sure that people know that there are no right answers to this. Is it Title I is it Title II? Well that’s a test case, and I’m not gonna be that guy in front of some article III judge saying, “But I thought it was fine.”

Another hurdle that’s in the near future is the Undetectable Firearms Act which makes it unlawful to manufacture a firearm that is not detectable by a walk-through metal detector or x-ray machines, but Wilson isn’t giving up his secret on how he’s planning to bypass this piece of legislation: “We’ve been pretty public about telling people what we’re doing but I’m not sure I want to give away the legal strategy here. Let’s keep it a secret. Bottom line, we’re gonna follow the law.” 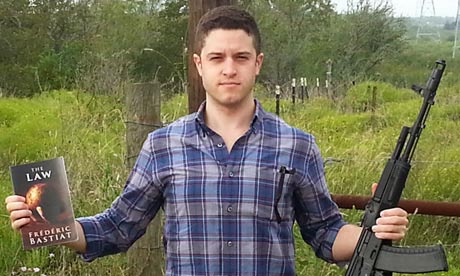 Getting another printer after the seizure won’t be a problem as various people have already contacted Wilson, but he says his top priority at this time will be to take care of the legal side of things as a preventative effort to any prosecutors who may choose to exercise too much discretion.

The precedent that would be established in offering open-source blueprints for 3D printable guns would definitely be detrimental to any effort geared towards disarming the population. Riding the wave of recent domestic terror incidents, the gun-grabbing lobby is in an all-out frenzy to portray gun owners and gun legislation as murderous and contradictory to the good of the people.

Largely ignored, however, is the fact that a population left helpless and dependent on the state and their police is exactly what the founding fathers were trying to prevent in crafting the Second Amendment.

It remains to be seen if a printed gun will actually work, and Wilson admits even he’s a little skeptical. “People say, well people didn’t know you could print guns with this technology. I don’t know if you can. That’s what this whole thing’s about. We’re willing to try, you know? How’s that so controversial? And it seems the closer I get, the further I am away from trying.”

One thing’s certain; if Defense Distributed succeeds in their efforts, as long as there’s a free Internet and someone has a 3D printer, all you’ll really need is ammo.

Below is the video Defense Distributed released in July: