A number of leading western scientists issued a stark warning in 2013 that Chinese researchers in virology labs were playing with fire by mixing animal viruses with human pathogens, and that the new strains could leak into the world, causing a killer pandemic.

The Independent published a piece covering the scientists’ concerns on Thursday 2 May 2013. 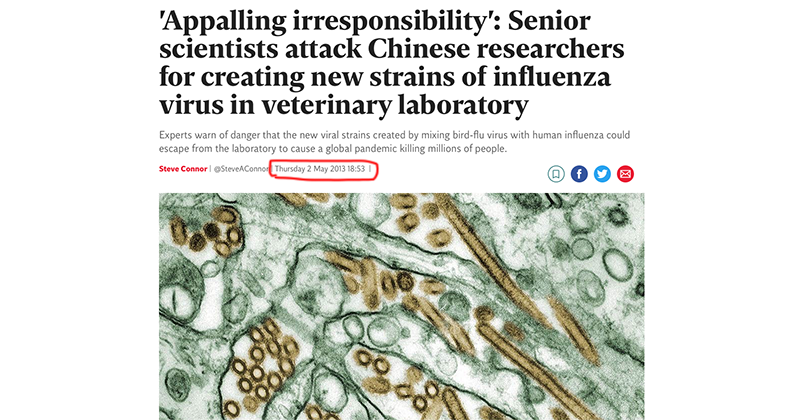 Senior scientists have criticised the “appalling irresponsibility” of researchers in China who have deliberately created new strains of influenza virus in a veterinary laboratory.

They warned there is a danger that the new viral strains created by mixing bird-flu virus with human influenza could escape from the laboratory to cause a global pandemic killing millions of people.

The piece concentrates on experiments with bird flu, but it is a known fact that scientists in China were also experimenting with bat borne coronavirus at this time.

The research was condemned by former UK government chief scientist Lord May of Oxford, who warned it was dangerous and was doing nothing to further the understanding and prevention of flu pandemics.

“They claim they are doing this to help develop vaccines and such like. In fact the real reason is that they are driven by blind ambition with no common sense whatsoever,” Lord May told The Independent at the time.

“The record of containment in labs like this is not reassuring. They are taking it upon themselves to create human-to-human transmission of very dangerous viruses. It’s appallingly irresponsible,” he said.

Another scientist, Professor Simon Wain-Hobson, an eminent virologist at the Pasteur Institute in Paris said at the time that “It’s a fabulous piece of virology by the Chinese group and it’s very impressive, but they haven’t been thinking clearly about what they are doing. It’s very worrying.”

“The virological basis of this work is not strong. It is of no use for vaccine development and the benefit in terms of surveillance for new flu viruses is oversold,” he added.

Coincidentally, Lord May died this week at the age of 84. The Scientist notes that “May’s modeling legacy extends to the current outbreak of COVID-19.”

“The models being used to guide the management of the coronavirus pandemic all have their genesis in the seminal work Lord Robert May undertook 40 years ago with Sir Roy Anderson,” the piece notes.

The warnings were there, and this article from seven years ago shows that investigating the bio-labs in Wuhan and the rest of China should indeed be the number one priority of every government in the world right now.

As we have exhaustively covered, several experts are on record as saying that the coronavirus pandemic could have leaked from the Wuhan Institute of Virology. In addition, the Chinese government knew its labs were a ticking time bomb, and were aware safety measures needed improving.