Pulitzer Winning Reporter: US Being Transformed Into A Gulag By Military Industrial Complex 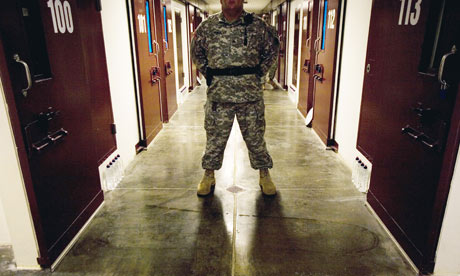 An award winning reporter who is suing the Obama administration over the National Defense Authorization Act (NDAA), which legislates for the ‘indefinite detention’ of American citizens without trial, is appalled at the lack of media coverage of the issue.

Appearing on RT, Pulitzer Prize winning journalist, author and Middle East expert Chris Hedges said that the NDAA, otherwise known as the ‘Homeland Battlefield Bill’, is already causing a chilling effect on the work of journalists in the US.

“The NDAA has received very little publicity, including by my former employer The New York Times.” Hedges said.

“It is a piece of legislation that was essentially supported by both political parties. Indeed the sponsors of the Bill are Carl Levin, a Democrat and John McCain, a Republican. There was no outcry within the systems of power itself, and that of course meant there was no outcry within the media, which allows those systems of power to set the parameters of debate.” Hedges added.

The controversial legislation, signed into law by Obama on New Years Eve, allows American citizens to be abducted and held in a detention camp anywhere in the world without trial under section 1031. Although Obama indicated in a signing statement attached to the bill that he would not use it to indefinitely detain American citizens, it was the Obama administration itself that requested the provision be worded so it would apply to US citizens.

The legislation specifically says that any persons deemed to have “substantially supported” al-Qaida and the Taliban and “associated forces” may be incarcerated without trial.

“What’s an associated force?” Hedges rhetorically asked, after explaining that his lawsuit is based around the fact that definitions within the NDAA are extremely, and seemingly purposefully vague.

“It could be any organization on [America’s terrorism] list, or lots of other organizations that aren’t on the list that are considered associated forces.” Hedges added.

“This is the problem. I spent 20 years as a foreign correspondent, and when we went through that list, there were 17 groups, including al Qaeda, that I have had, as a reporter, direct contact with. There is no provision in there to protect journalists at all, or anyone. Anybody can be swept up under this.” Hedges urged.

“You don’t want to hand these kinds of powers to the state, because history has shown that, eventually, they will use it.” he added.

“We’ve already seen from the Stratfor email releases, they’ve already [connected Occupy with terrorists],” he said. “Alexa O’Brien, who is one of the plaintiffs, lost her job because after these kind of accusations, U.S. government officials went to her employer and made investigations or queries about her. She was pulled off projects and eventually pushed out of her work. That is an example of the kind of world we are entering if we are not able to strike back against this legislation.”

Hedges also penned a lengthy commentary piece on his opposition to the NDAA this week, providing greater context as to why the legislation represents such an assault on the Bill Of Rights and the Constitution.

“They justify their existence, and their consuming of vast governmental resources, by turning even the banal and the mundane into a potential threat. And by the time they finish, the nation will be a gulag.”

Last week a Federal court in New York heard the opening arguments for a preliminary injunction against the NDAA. Seven plaintiffs, including MIT professor Noam Chomsky, Pentagon Papers source Daniel Ellsberg, and author and campaigner Naomi Wolf argued that the US military will and has already undermined any safeguards to American citizens promised by the Obama administration.