Senator Rand Paul weighed in on the furor surrounding Democratic Minnesota Rep. Ilhan Omar, suggesting that if she went back to Somalia for a while she might appreciate America more than she seemingly does now.

“I hear Rep. Omar say, ‘Oh, America is a terrible place,” Paul  said during an interview with Breitbart on Wednesday.

“I thought there’d be justice but there’s no justice here. It’s like, she came here and we fed her, we clothed her, she got welfare, she got school, she got healthcare, and lo and behold she has the honor of actually winning a seat in Congress and she says we’re a terrible country.” Paul continued.

“I think that’s about as ungrateful as you can get.” the Senator urged.

Paul even offered to contribute toward a ticket for Omar to go back to Somalia.

“So while I’m not saying we forcibly send her anywhere, I’m willing to contribute to buy her a ticket to go visit Somalia.” Paul noted.

“I think she could look and maybe learn a little about bit about the disaster that is Somalia, that has no capitalism, has no God-given rights guaranteed in a Constitution and has about seven different tribes that have been fighting each other for the last 40 years.” he continued.

“And then maybe after she’s visited Somalia for a while she might come back and appreciate America more.” Paul concluded.

It is the same suggestion made by President Trump earlier this month.

So interesting to see “Progressive” Democrat Congresswomen, who originally came from countries whose governments are a complete and total catastrophe, the worst, most corrupt and inept anywhere in the world (if they even have a functioning government at all), now loudly……

….it is done. These places need your help badly, you can’t leave fast enough. I’m sure that Nancy Pelosi would be very happy to quickly work out free travel arrangements!

Of course, anti-Trumpers took the comments out of context and claimed Trump was suggesting deporting Omar.

Some on social media responded by suggesting that it is actually Rand Paul who hates America, because he voted against the bill to provide further financial assistance to the 9/11 First Responders Victims Fund, while Omar voted in favor of it. 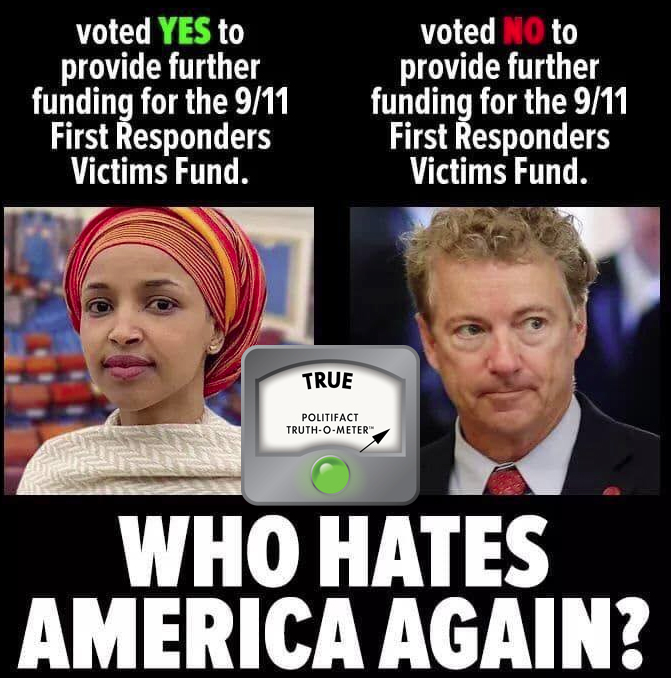 In reality, Paul explained in detail why he voted against the bill, sticking to principles that have seen him also vote against funding for the border wall and disaster relief. He also proposed amendments which would have required offsets for money spent on the fund.

While I support our heroic first responders, I can’t in good conscience vote for legislation which to my dismay remains unfunded. We have a nearly trillion dollar deficit and $22 trillion in debt. Spending is out of control.

As I have done on countless issues, including disaster relief and wall funding, I will always take a stand against borrowing more money to pay for programs rather than setting priorities and cutting waste.

Ilhan Omar, on the other hand, still refuses to condemn Al Qaeda terrorists, and has described the 9/11 attacks as “some people did something.”