Ron Paul: The Federal Reserve is Defaulting on the American People

Politicians need to understand that without real change default is inevitable. In fact, default happens every day through monetary policy tricks. Every time the Federal Reserve engages in more quantitative easing and devalues the dollar, it is defaulting on the American people by eroding their purchasing power and inflating their savings away. The dollar has lost nearly 50% of its value against gold since 2008.The Fed claims inflation is 2% or less over the past few years; however economists who compile alternate data show a 9% inflation rate if calculated more traditionally. Alarmingly, the administration is talking about changing the methodology of the CPI calculation yet again to hide the damage of the government’s policies. Changing the CPI will also enable the government to avoid giving seniors a COLA (cost of living adjustment) on their social security checks, and raise taxes via the hidden means of “bracket creep.” This is a default. Just because it is a default on the people and not the banks and foreign holders of our debt does not mean it doesn’t count.

Perhaps the most abhorrent bit of chicanery has been the threat that if a deal is not reached to increase the debt by August 2nd, social security checks may not go out. In reality, the Chief Actuary of Social Security confirmed last week that current Social Security tax receipts are more than enough to cover current outlays. The only reason those checks would not go out would be if the administration decided to spend those designated funds elsewhere. It is very telling that the administration would rather frighten seniors dependent on social security checks than alarm their big banking friends, who have already received $5.3 trillion in bailouts, stimulus and quantitative easing. This instance of trying to blackmail Congress ….

We need to stop expensive bombing campaigns against people on the other side of the globe and bring our troops home. We need to stop allowing secretive banking cartels to endlessly enslave us through monetary policy trickery. And we need to drastically rethink government’s role in our lives so we can get it out of the way and get back to work.

Remember, quantitative easing doesn’t help anyone but the biggest Wall Street companies (and see this, this and this).

And while “the dollar has lost nearly 50% of its value against gold since 2008”, it got creamed by Federal Reserve policies before then as well. As I noted last year:

And here’s a bonus chart showing the decline in the dollar’s purchasing power from 1913 to 2005: 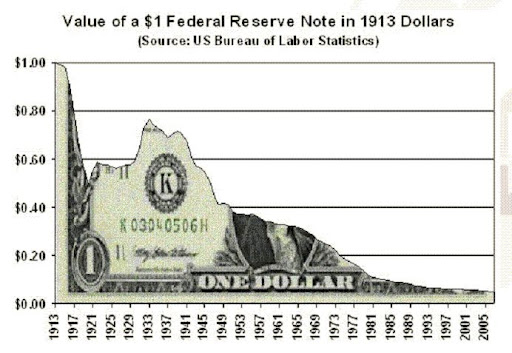 Indeed, Ben Bernanke has previously admitted that inflation is a tax on the American people:

Note: While money printing creates inflation, so does war. Paul’s anti-war comments are thus relevant to the economy as well.