Shocking Facts About The Deindustrialization Of America That Everyone Should Know

How long can America continue to burn up wealth?  How long can this nation continue to consume far more wealth than it produces?  The trade deficit is one of the biggest reasons for the steady decline of the U.S. economy, but many Americans don’t even understand what it is.  Basically, we are buying far more stuff from the rest of the world than they are buying from us.  That means that far more money is constantly leaving the country than is coming into the country.

In order to keep the game going, we have to go to the people that we bought all of that stuff from and ask them to lend our money back to us.  Or lately, we just have the Federal Reserve create new money out of thin air.  This is called “quantitative easing”.  Our current debt-fueled lifestyle is dependent on this cycle continuing.  In order to live like we do, we must consume far more wealth than we produce.  If someday we are forced to only live on the wealth that we create, it will require a massive adjustment in our standard of living.  We have become great at consuming wealth but not so great at creating it.  But as a result of running gigantic trade deficits year after year, we have lost tens of thousands of businesses, millions upon millions of jobs, and America is being deindustrialized at a staggering pace.

Most Americans won’t even notice, but the latest monthly trade deficit increased to 42.3 billion dollars…

The U.S. trade deficit climbed to the highest level in five months in February as demand for American exports fell while imports increased slightly.

The deficit increased to $42.3 billion, which was 7.7% above the January imbalance of $39.3 billion, the Commerce Department reported Thursday.

When the trade deficit increases, it means that even more wealth, even more jobs and even more businesses have left the United States.

In essence, we have gotten poorer as a nation.

Have you ever wondered how China has gotten so wealthy?

Just a few decades ago, they were basically a joke economically.

So how in the world did they get so powerful?

Well, one of the primary ways that they did it was by selling us far more stuff than we sold to them.  If we had refused to do business with communist China, they never would have become what they have become today.  It was our decisions that allowed China to become an economic powerhouse.

Last year, we sold 122 billion dollars of stuff to China.

That sounds like a lot until you learn that China sold 440 billion dollarsof stuff to us.

We fill up our shopping carts with lots of cheap plastic trinkets that are “made in China”, and they pile up gigantic mountains of our money which we beg them to lend back to us so that we can pay our bills.

Below, I have posted our yearly trade deficits with China since 1990.  Let’s see if you can spot the trend…

It has been estimated that the U.S. economy loses approximately 9,000 jobs for every 1 billion dollars of goods that are imported from overseas, and according to the Economic Policy Institute, America is losing about half a million jobs to China every single year.

Considering the high level of unemployment that we now have in this country, can we really afford to be doing that?

Overall, the United States has accumulated a total trade deficit with the rest of the world of more than 8 trillion dollars since 1975.

As a result, we have lost tens of thousands of businesses, millions of jobs and our economic infrastructure has been absolutely gutted. 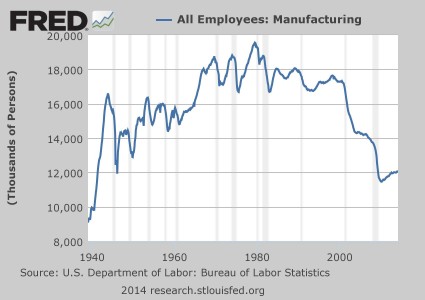 Many people find this statistic hard to believe, but the United States has lost a total of more than 56,000 manufacturing facilities since 2001.

Millions of good paying jobs have been lost.

As a result, the middle class is shriveling up, and at this point 9 out of the top 10 occupations in America pay less than $35,000 a year.

For a long time, U.S. consumers attempted to keep up their middle class lifestyles by going into constantly increasing amounts of debt, but now it is becoming increasingly apparent that middle class consumers aretapped out.

In response, major retailers are closing thousands of stores in poor and middle class neighborhoods all over the country.  You can see some amazing photos of America’s abandoned shopping malls right here.

If we could start reducing the size of our trade deficit, that would go a long way toward getting the United States back on the right economic path.

Unfortunately, Barack Obama has been negotiating a treaty in secret which is going to send the deindustrialization of America into overdrive.  The Trans-Pacific Partnership is being called the “NAFTA of the Pacific”, and it is going to result in millions more good jobs being sent to the other side of the planet where it is legal to pay slave labor wages.

According to Professor Alan Blinder of Princeton University, 40 millionmore U.S. jobs could be sent offshore over the next two decades if current trends continue.

So what will this country look like when we lose tens of millions more jobs than we already have?

U.S. workers are being merged into a giant global labor pool where they must compete directly for jobs with people making less than a dollar an hour with no benefits.

Obama tells us that globalization is good for us and that Americans need to be ready to adjust to a “level playing field”.

At one time, the city of Detroit was the greatest manufacturing city on the entire planet and it had the highest per capita income in the United States.  But today, it is a rotting, decaying hellhole that the rest of the world laughs at.

In the end, the rest of the nation is going to suffer the same fate as Detroit unless Americans are willing to stand up and fight for their economy while they still can.