One can only imagine the headlines had the Syrian government been caught using blindfolded prisoners to deliver trucks to enemy targets, told freedom was at hand when in reality they were delivering vehicles packed full of explosives and were essentially unwitting “human bombs.” Curt articles with headlines like “ASSAD REGIME USES HUMAN BOMBS!” would surely be splashed across the Western press. 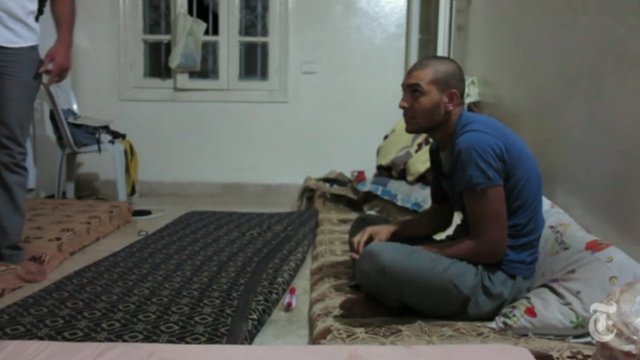 Image: This man, identified as Abu Hilal, was told he’d be given his freedom as part of a “prisoner exchange.” In reality, terrorists had planted a bomb in the bed of the truck Hilal would be driving and planned to detonate it remotely as he approached a military checkpoint. Undermining yet another myth of the fraudulent “War on Terror,” it appears that Al Qaeda-affiliated terrorists, in Syria, Iraq, and beyond, have used unwitting “human bombs” driving vehicles or carrying parcels rigged with explosives they had no knowledge of – claiming they are “suicide bombers.”

However, it is terrorist militants operating in Syria that are employing these very tactics, apparently so frequently the Western media has feared eventually the story would get out. What would follow was a “limited hangout” provided courtesy of the New York Times, with copious amounts of literary padding to portray the craven war criminals as “human” and their premeditated violation of human rights as “desperate,” even “justified.”

Even the title of NYT’s article, “Life With Syria’s Rebels in a Cold and Cunning War,” betrays what is essentially reported – an egregious war crime that illuminates what many have long suspected is the reality behind “suicide bombings” used by Al Qaeda and its affiliates not just in Syria, but worldwide – that they are not carried out by fanatics, but by unwitting, coerced, and ultimately innocent victims.

What NYT does, is attempt with its long-winded narrative to humanize and endear to us the militants before revealing just what they did. However, the nearly 4,000 word article boils down to just 4 sentences:

The real plan was beginning to emerge. It involved the prisoner, Abu Hilal. The assurances that he would be released had been a deception. The fighters intended to put him behind the wheel of the truck bomb near the checkpoint and tell him to drive forward in a prisoner exchange.

The NYT would claim that the bomb “failed” leaving the terrorists “disappointed.” But in Syria, sectarian terrorists, many with direct ties to Al Qaeda, have been employing bombings like this for months, many of which have been categorized as “suicide bombings.” Surely had NYT’s terrorist hosts succeeded, yet another “suicide bombing” would have been marked down.

It had been reported in May 2012, that terrorists operating in Syria had begun using bombs to target both the military and civilians, with entire “factories” dedicated to the production of explosive devices. Many of these bombs were being built by Al Qaeda-affiliated terrorists who had participated in the Iraqi civil war, cultivated by the West itself to break the back of joint Sunni-Shi’ia resistance to US occupation.

Also, during the Iraq War and US occupation throughout it, there were reports of Iraqis having their vehicles impounded by Western forces, and upon securing the release of their vehicles discovering they had been rigged with explosives – in a scenario very similar to what is now being seen by US-funded, armed, and backed terrorists in Syria.

With this latest insight into the deceit with which the West wages its proxy wars, and the deceit exhibited by their terrorist legionaries, along with stories like British SAS soldiers being caught in Iraq posing as extremists and terrorizing local populations to trigger further conflict, the public must be aware that not all is what it seems, especially in regards to what is reported by the West’s corporate media. NYT has reported this to portray it as an isolated incident, when in reality it is a method of operation that has transcended US theaters of war and destabilization across the region and beyond.

What the New York Times has done, and many other Western media houses like it have been doing, is observing war crimes, then promptly spinning and excusing them. Concurrently, they manipulate Syrian Army operations, or even fabricate events, to demonize the Syrian government. This is war propaganda, and it is in itself is a war crime punishable under the Nuremberg precedent. As war criminals, the Western press certainly have found ideological allies amongst the terrorists ravaging Syria.