With the latest TIC data showing China following Russia’s lead and reducing its US Treasury exposure (to two-year lows), as it increases its gold reserves (for six straight months), the unipolar US hegemon faces an ugly trend among the ‘rest of the world’ attempting to de-dollarize, as Sergey Naryshkin,  director of the Russian Foreign Intelligence Service, calls the US dollar is an anachronism of the modern world economy.

Countries across the globe, including Russia, China, India, and others, have been working to diversify their foreign reserves away from the greenback. 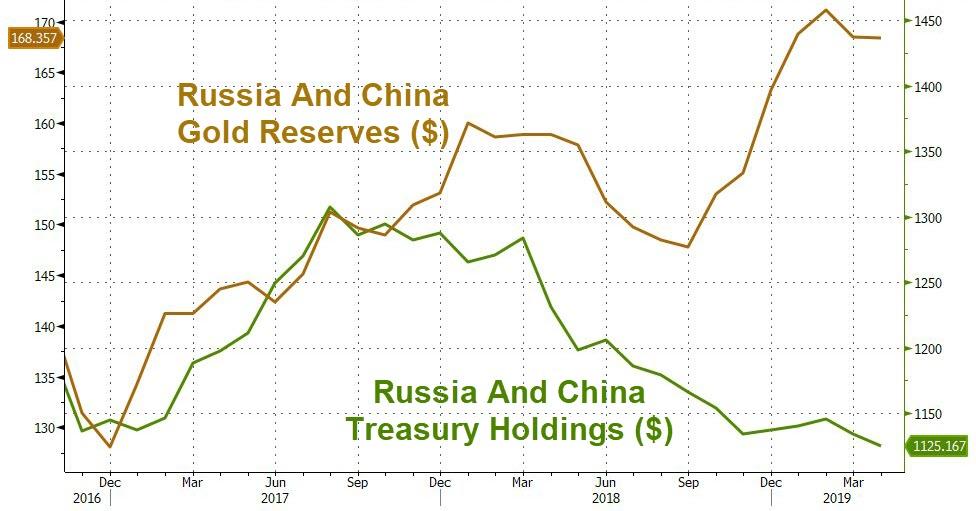 And, as RT reports, the head of the Russian intelligence service has now voiced those concerns clearly – that the use of the dollar presents risks and more nations are looking into finding alternative tools for doing business.

“It seems abnormal that the United States, behaving so aggressively and unpredictably, continues to be the holder of the main reserve currency.”

“Due to the objective strengthening of multipolarity, the monopoly position of the dollar in international economic relations becomes anachronistic. Gradually, the dollar is becoming toxic.”

And it’s not just talk, as RT notes, Russia has taken concrete steps towards de-dollarizing the economy. So far, Moscow has managed to partially phase out the dollar from its exports, signing currency-swap agreements with a number of countries, including China, India, and Iran. Russia has recently proposed using the euro instead of the US dollar in trade with the European Union.

This comes on the heels of Malaysian Prime Minister Dr. Mahathir Mohamad proposing a gold-backed currency as a unit of account for trade between East Asian nations.

“For the past 40+ years we’ve tried to remove ourselves from a gold standard, we pretended it doesn’t exist… and that failed because gold is always telling the truth… and you don’t have to trust to somebody printing up a whole bunch of money,”